At CES AMD released a minimal amount of performance data for their Radeon VII, giving us very little to go on aside from the graphics card's stream processor count, which is lower than the RX Vega 64, and the CPU's memory bandwidth, with is almost two times greater than the RX Vega 64.

With the performance numbers provided, AMD's Radeon VII was seen to offer performance levels that were similar to Nvidia's RTX 2080 graphics card, but now we have a little more data to go on.

To achieve the results below, AMD benchmarked each of these games three times for each graphics card while running each game at the same settings and on the same Radeon graphics driver. AMD stated that they used 4K Ultra settings for Battlefield V and Strange Brigade. It is likely that equivalent settings are used for the other games. 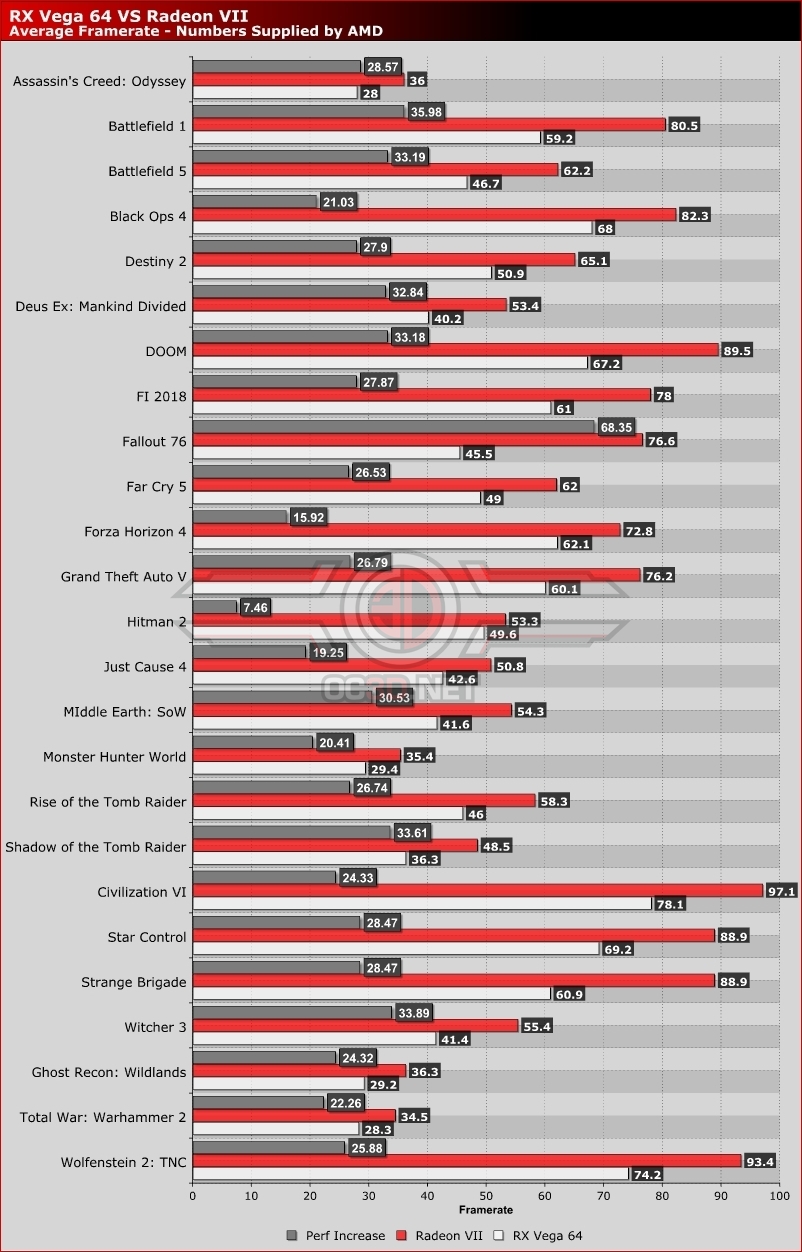 You can join the discussion on AMD's Benchmarks for their Radeon VII graphics card on the OC3D Forums.

tolagarf
It's a decent increase but it's just not good enough. I expected better. Now had they priced it at $600 instead of 700 that would had made a good difference for sure, but right now it seems to me that AMD is content on safely being no.2.

And what the heck is up with that cooler design?! It's certainly not winning any beauty contests and I have my doubts about its efficiency with much of the sides being closed offQuote

AlienALX
There are a few ways of looking at this.

And etc. I quite like the cooler. Reminds me of the 7990. What I do not like is the price, because for gaming that massive increase in HBM bandwidth will have little to no effect.

Like I said before, the sooner Vega goes away the better for AMD. It wasn't very good from the off.Quote

grec
Quote:
To be fair, being safely no.2 in a small fraction (IE the high end portion) of the PC gaming market is far from a big deal when they've got their fingers in so many pies(Some a lot more profitable and most reaching much larger audiences). They're still by a very long shot the most used GPU manufacturer for gaming(And will continue to be until at least 2025-2030 by the looks of the next gen consoles) so it makes sense they're not targeting the lowest volume portion of the gaming market with any big hitters.Quote

Dawelio
And are these numbers in 4K or in what resolution exactly? Can't find the answer in the article.Quote