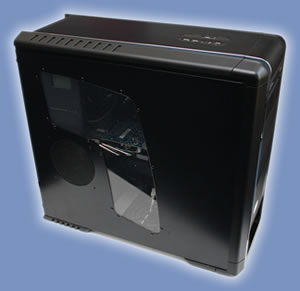 Back in July of last year Overclock3D was fortunate enough to take a look at YOYOTech's Spartan 300 PC system. Built with the gamer in mind, but at a price point more traditionally associated with a mid-range 'office' system, YOYOTech's careful selection of components proved that you didn't need to sell a kidney to have a system capable of playing the latest titles. Since then YOYOTech have brought to the market many more stonking systems - some of which have smashed benchmarks, landing themselves a place in the record books and in media worldwide.

However today with our feet firmly set on the ground,  we're going to be taking a look at YOYOTech's latest system - the Water Dragon 940.  Aimed at "power users and gamers" the Water Dragon 940 is based around an AMD Phenom II X4 940 CPU, Sapphire 4870 512MB GPU and 4GB of Corsair TwinX RAM; delivering a balanced system specification. Of course, you can't have 'Water' in a PC name without backing it up with some actual H2O, so catering for the cooling side of things is a CoolIT Domino ALC self contained water cooling system. Let's check out the full system spec:

Processor: AMD Phenom II X4 940 clocked to 3.6GHz
CPU Cooler: Cool IT Domino ALC with Blue LED
Mainboard: Sapphire Pure 790G
Graphics: Sapphire 4870 512MB clocked at 800/1000
Memory: 4GB Corsair TwinX PC6400 DDR2
Hard Drive: 320GB Samsung Spinpoint
Chassis: Cooler Master 690 with transparent side panel
PSU: OCZ 500w StealthXstream
ROM: 22x DVD Multi-Burner
Price Includes: Professional assembly, overclocks and 12 month warranty
With the Phenom II 940 overclocked to a rather tasty 3.6GHz its easy to see why YOYOTech wanted something a little more substantial than standard air cooling to keep system temperatures in check. Of course, whether or not this is something that the CoolIT Domino water cooling system can achieve is yet to be seen. The graphics card has also received a reasonable overclock to 800MHz /1000MHz (Core/Memory) which makes a refreshing change from the cop-out method of using a pre-overclocked graphics card, and should provide a small (yet free) FPS boost in games.

The AMD 790G based Sapphire motherboard is an interesting choice considering Sapphire aren't exactly well known for their success in this area. However, YOYOTech have clearly put their faith in this particular model and providing it can hold the X4 940 overclocked to 3.6GHz there's no reason for us to doubt their decision.

Now that we've got the paper specs out of the way, let's take a closer look at the system in the flesh.

valor
maybe someone who doesn`t care to much about money goes for it.most of the "addicted" care about the "look" on their desk...Quote
Reply