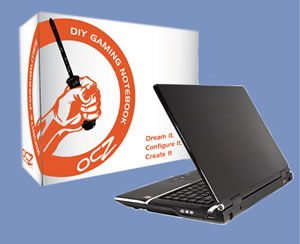 While the idea of gaming notebooks often conjures up images of some Counter-Strike junkie sitting on the train to work 'pwning n00bs' using his touchpad alone, the reality behind the idea comes more from the LAN gaming scene. As frequent LAN gamers will tell you, probably the worst part of attending a LAN is getting there in the first place. It's very rare that LAN events are close to home, and traveling long distances on trains or even planes certainly isn't an enjoyable experience when you've got your precious, yet extremely heavy PC in tow. However, with the release of NVIDIA and ATI's high-end mobile GPU's coupled with Intel's extremely fast and efficient CPU's, the ability to simply carry your gaming machine around on your shoulder has been realised, and the gaming notebook born.

Of course there's always a catch isn't there, and from an enthusiast's perspective, it's the total lack of customisation and upgradeability. When purchasing a new notebook, even one of the excessively expensive gaming models, you're often stuck with what the manufacturer deems as the best system configuration. Lower-end models come with slow CPU's, hardly any RAM and small hard disks, whereas the higher-end ones are fully loaded in every respect but have an extortionate price tag to match. But what if you're after a notebook with a specification that suits the games or applications you use and doesn't necessarily fit into the high/medium/low criteria that most manufacturers tend to cater for? Enter OCZ...

Once a company best known for their quality DDR 'Platinum' memory kits, OCZ has grown in leaps and bounds over the past few years, expanding into new markets and bringing enthusiasts the latest technology at affordable prices. Two such products that are testament to this are the Neural Impulse Actuator and the 'Core' Solid State Disk series. However, OCZ have certainly never been a company to rest on their laurels and in the summer of 2008 announced that they would be stepping into the notebook market with a new DIY (Do-It-Yourself) range that would provide enthusiasts and regular users alike the opportunity to spec and build a notebook that exactly suit their needs. Today we're going to be looking at one of the latest models in this lineup: a Intel® Centrino™ 2 based 15" model complete with an ATI® Radeon HD3650 graphics card. But before we spoil all the surprises, let's head over to OCZ for some further information:

Building your own gaming desktop can be complicated and meticulous so who would think that building your own gaming notebook would be any easier or even possible? OCZ introduces this exciting initiative to the enthusiast, gamer, and IT professional with the new Do-It-Yourself (DIY) Gaming Notebooks. Designed to make it easier than ever for consumers to take full advantage of the benefits of building their very own gaming notebook, OCZ's DIY program is one-of-a-kind, and allows consumers to build a truly high performance notebook with their own ideal configuration in just a few easy to follow step

For what could be considered a bare-bones notebook, the OCZ DIY 15" is extremely well-equipped indeed. For starters, we have the DirectX 10.1 compatible HD3650 512MB graphics card as already mentioned, along with a reasonably-sized 15.4" WXGA screen capable of a fairly standard 1280x800 resolution. A choice between a 24x/8x CD/DVD writer or a Blu-ray drive (the former in our case) is also provided, and the Intel ICH9M southbridge gives support for both standard and solid state disk drives.

Wireless connectivity is provided by an Intel 5300 Draft-N adaptor for speedy net access, and a Bluetooth 2.0 adaptor enables the notebook to communicate easily with devices such as PDA's, mobile phones and Bluetooth mice/keyboards.

Additional devices such as a fingerprint reader, 2.0MP camera and 4-in-1 card reader also come as standard, and we will be covering these in more detail as we perform a tour of the notebook over the next few pages.

AntiHeroUK
Great video Jim. Nice to see you wore some bling for it

The DIY 15" is a very smart looking unit, it's just a shame they didn't add some form of branding to brighten it's appearence up a bit like you said. A backlit logo would look rather snazzy in my opinion.

The one thing that stood out the most for me is the appalling battery life. Although when gaming at LANs you will have access to mains power when you need it, I would still expect 2 hours minimum for reasonably heavy usage this day in age.

It's good to see the addition of an HDMI out, fingerprint reader, bluetooth included in the price and not optional extras.

Whilst OCZ have made a good effort at bringing an affordable DIY notebook to the market, I personally feel it falls short, even if just a little. I hope they listen to criticism and take it on board as they may be on to a winner if they make a few changes here and there.

Good job on the review as a whole.

Rastalovich
The idea is nice.

The implementation is fair.

I just feel a little short-changed in the amount of things u really can diy with such barebones-notebooks. I know it's not exactly a mobo and a case - and away u go.

Performs pretty well mind, components taken into account, and I'm glad to see some stats there I can compare against the cheap HP I pimped out.

The looks I think are down to the user to mold into their personal tastes. I see people putting stickers/labels over them - to that end a shiny surface is a good 'attacher' but when it comes to taking off the ATI logo, cos u felt embarassed or something, I wouldn't fancy watching jonny scraping at it with an implement.

Didn't see any emphasis on dvi, although hdmi available, and would be interested in them showing docking options for these so u can be prouder @home with ur build.

Far better in my opinion to stick with 1280*800 as they have done so that 720p is within easy reach without the screen having to interpolate the resolution horizontally- resulting in horrible scaling in some cases. It also means the 3650 isn't pushing as many pixels during gaming, which should improve performance.

I have to say that was one of the best reviews I've read in ages, as others have said the addition of the video was great, and I think OCZ are really moving into exciting tech, so respect to them for taking the initial plunge into the market.Quote

Rastalovich
I meant 1050 tbh. Apart from HD considerations, I was thinking more of basic web viewing. For just the likes of games I'm not sure whether I'd prefer to go over 800 dots or not.

Great review of a, ahem, different product. It's certainly a strange one. The idea is sound, but the battery life is a killer.Quote
Reply