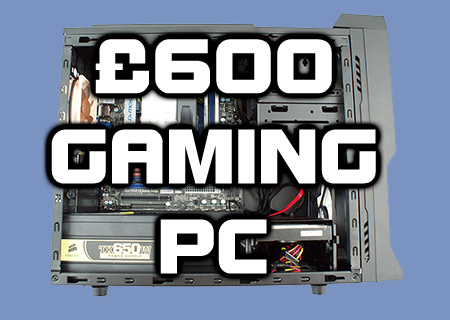 We've often talked amongst ourselves about what the difference is between a super high-end system and one that's much more affordable, especially for gaming. One of the major things we've spoken of when reviewing graphics cards is that the speed and capabilities of the processor doesn't make that much difference when compared to the abilities of the card.

Obviously if you're going to spend your life editing video or doing an independent version of a Pixar film then you'll need all the power that you can get your hands on. But what if you just want to have a standard PC and use it for standard things, with the occasional game thrown in?

One of the great little processors we've reviewed in recent months was the Intel i3 and so having a good look around and talking to some of the companies who are kind enough to keep in contact with us, we discovered that Aria have a pre-overclocked bundle that's hugely popular and just £220, pre-built too.

So we've got a good base to work from and could add enough bits and bobs to put together what we feel would be a superb gaming rig for around £380, leaving us about £220 to buy a graphics card and still get under budget. Before we move on to what we've chosen, let's look at the basis for our sub-£600 gaming system.

The foundation for our system is the Aria Gladiator i3 540 pre-overclocked and pre-built system bundle. For only £220 you get the following parts :

As you can see that's a huge amount of stuff for the price of a sole i7-930. We've often reviewed Mushkin RAM recently and we know how good that performs. MSI produce some of the best motherboards available so we should be fine there too, and of course the excellent Core i3 from Intel at a stonking 4.2 GHz.

Usually there is a hefty premium to pay for any pre-built system, and a further one if that is overclocked. However here we find the bundle comes in right at where you'd be able to purchase the parts separately, but without any of the hassles of building it yourself, or finding a good overclock, or even the dreaded nightmare of a DOA part.

Zeals
So you recommend Intel 1156 over AMD CPUs for a budget rig?

It also proves you can't bottleneck your GPU with your CPU

SO you were right all alongQuote

tinytomlogan
Quote:
It depends what you are lucky for in the rig dude. At this price with decent performance its deffo a really good idea to get the i3 and overclock it as the performace is great. Really depends on the budget tbh.Quote

Fodr Kreatr
simple: don't buy a case for it and run it in a freezer, no fans needed!