The moment you open the lid of the Zephyrus it becomes clear as to why you have a wrist rest included. Rather than having the keyboard at the top with a trackpad and wrist area beneath, the GX501G chassis has the keyboard and trackpad right at the front, which would necessitate the wrist rest for long sessions.

However, away from that we think that the keyboard and trackpad area looks very nice, with chiclet keys in a UK layout, a trackpad that has a party piece we'll look at at the bottom of the page, and plenty of space for ventilation and audio in the area we'd normally find the keyboard. The screen is a 15", 1080, 144Hz GSYNC IPS offering that follows the rest of the design by being extremely thin. Just above it are the bits necessary for video chat or scarecam on game streaming, namely an HD webcam and microphone. 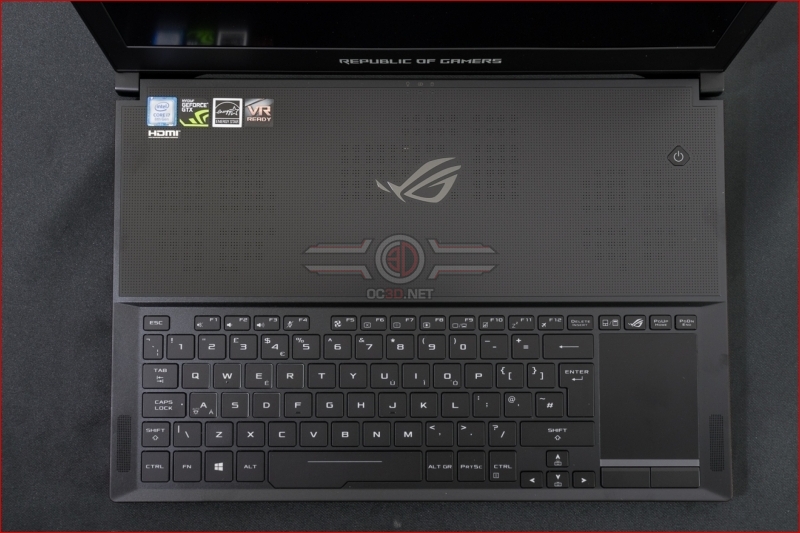 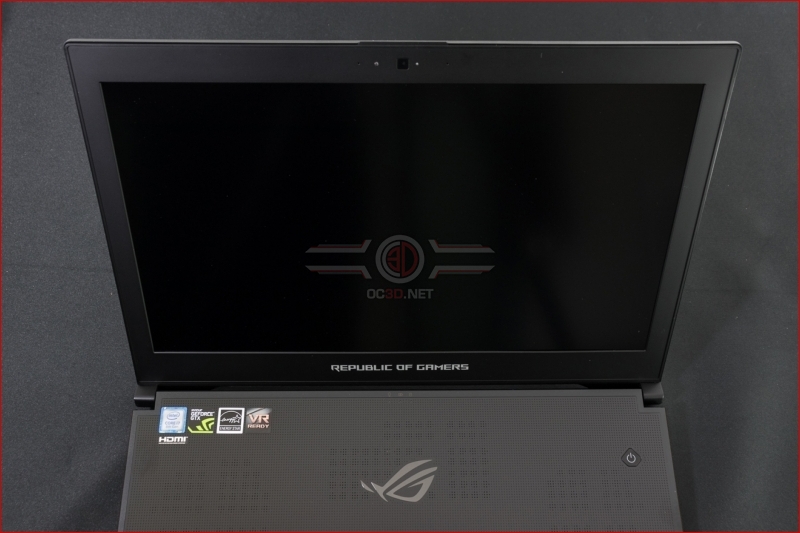 Here is the Zephyrus chassis in all its paper thinness. It is barely thicker than a phone with a good case on it at 17mm thick and it isn't much heavier either, weighing just 2.2kg. Certainly if you're the type of person who bows at the altar of slender products and puts a svelte chassis above all other considerations you could probably stop reading here. The Zephyrus is extraordinarily thin. 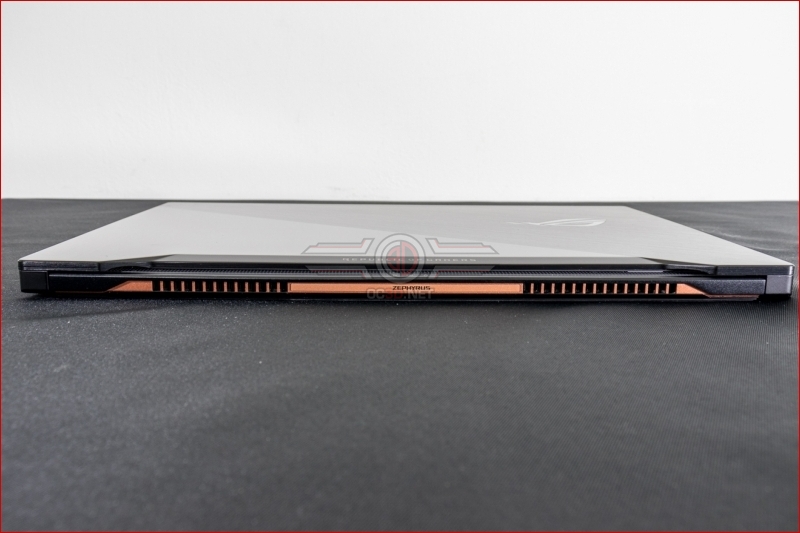 On the right hand side we find a Type-C USB 3.1 Thunderbolt port alongside 2 USB 3.1 Gen1 ports and the all important Kensington lock, whilst the left hand side has two USB 3.1 Gen2 ports, an HDMI, a 4 pole 3.5mm jack and the power input. 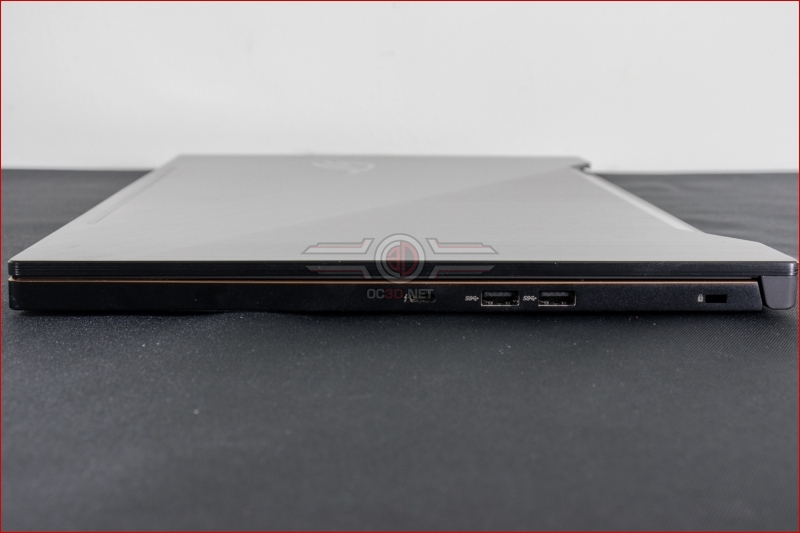 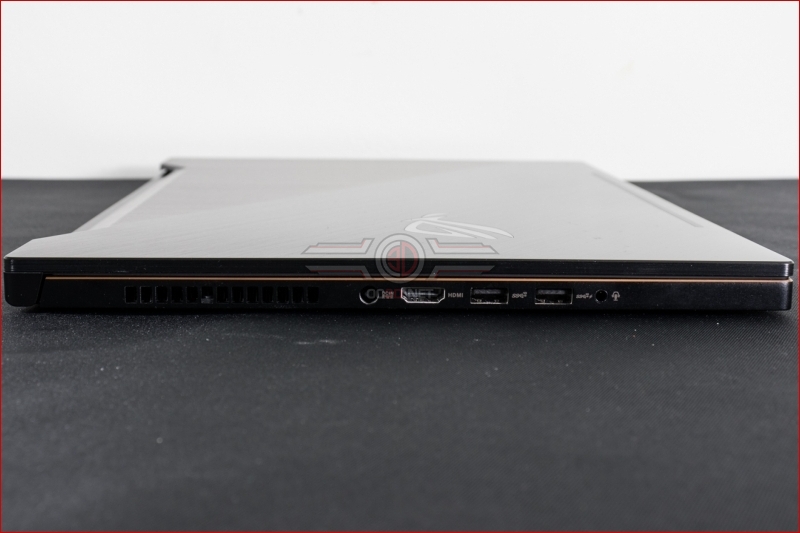 It isn't easy to photograph the party piece of the chassis but hopefully a quick glance between the photo above and this one will make it clear. When you lift the display the underside of the Zephyrus chassis breaks away from the main body to tilt everything towards you whilst also providing the space for ventilation necessary to keep everything running cool. If you've ever endured trying to have a laptop on your lap without covering up any of the vital cooling vents you'll appreciate this attempt to circumvent this issue. 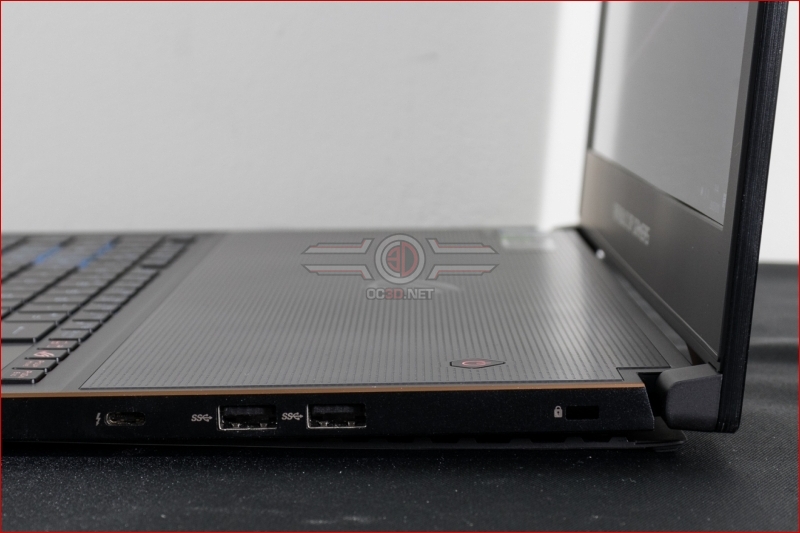 The other main "whoo" type feature on the Zephyrus GX501G is that the trackpad doubles up as a number pad with a quick press of the button in the normal num lock position. For those of us used to inputting all of our numbers using the numpad rather than the ones above the QWERTY row this is a very cool feature, and the included mouse makes having it as a permanent solution an easy thing to do if you so choose.

As you would expect from an ROG AURA product there is RGB lighting on board the Zephyrus. It isn't the brightest nor best at subtle shades lighting we've ever seen, but the crisp key font and uniform lighting at least looks the part if you aren't asking it to be more than the primary shades one would normally pick. 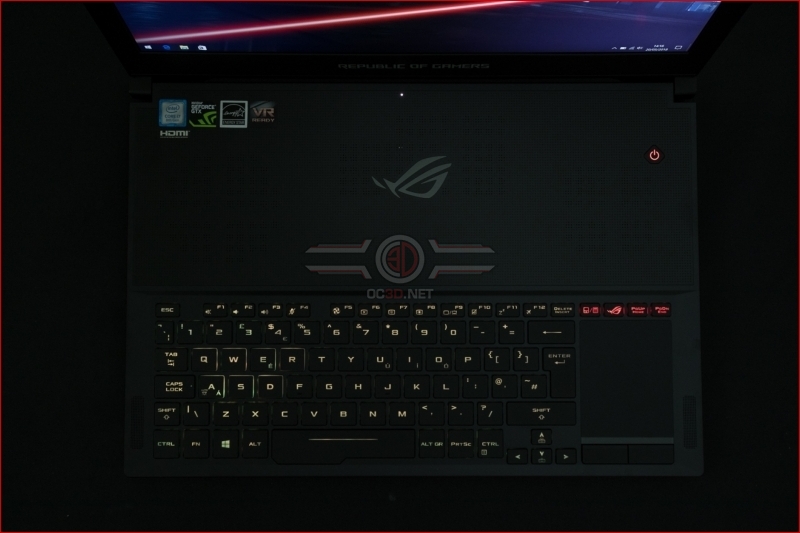 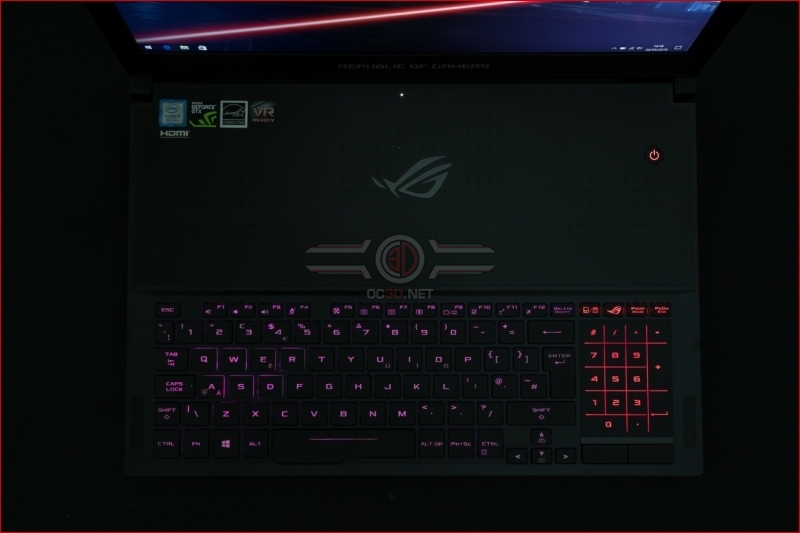