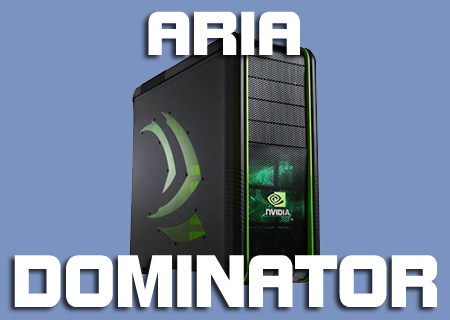 Most of us 'enthusiasts' learnt to build our own computers for two main reasons.

The first is one simply of cost. PCs come in two flavours, the cheap Internet ready variety which are fine for the most basic tasks but useless for anything more strenuous than Freecell, and the Gaming PC, which can play pretty much anything but comes with a price-tag to match.

The second, and often overlooked, reason is the parts list. How often have you seen a specification and thought "if only it had a better cooler/more RAM/whatever"? So rather than paying through the nose to get a collection of bits you'll need to upgrade anyway it is easier to build it yourself.

Of course we're well aware that not everyone has the confidence or capabilities to build an entire system. There is quite a gulf between switching out a graphics card and installing a CPU and the relevant cabling.

What would be really fabulous was if a company came up with a system that had all the choicest bits of hardware, at an affordable price, without any of the hassle of building a system yourself. Aria have just the thing in the Dominator 560Ti so we just had to take a look.

What Do You Get?

If you're the type of person who keeps up with the hardware market, and thanks to OC3D that should be easy to do, then a quick run down of the specifications list here should get you nodding your head in approval.

The i5-2500K is our own weapon of choice here on the OC3D P67 bench table, we recently praised the GTX560 Ti very highly, Mushkin we love, Kingston make probably the best series of SSDs on the market, the Spinpoint F3 is probably the most popular hard-drive on the planet, MSI motherboards are bulletproof and the Corsair PSUs have been a mainstay of high-end rigs for a long time.

Wrap that all up in the fabulous CM690 II Coolermaster case and a years warranty, there really isn't anything to complain about at all. Even the DVD drive is Sony rather than some no-brand cheapo example. £1099.99 gets you an extraordinary amount of power these days.

marsey99
only a 9 for presentation?

dam your a hard man to impress, that looks like it took alot of time to put together and route the wires out of the way like that, id give that wiring 10/10 all day every day me

SieB
I was impressed with this rig, i'm usually against prebuilt systems but this ones actually a good deal and like Tom said this one has been built well and not just thrown together.Quote

bobkelso
I'm a bit 50/50 on the case I don't dislike it but the black and green just doesn't do it for me, I must say I like the build qaulity and the pictures I think do it justice. Also a nice beefy corsair psu 8gb of mushkin ram a nice ssd and the 560ti etc all for that price prebuilt is really good I think, I take my hat off to aria. Now if only I could afford this with a 570 I would be in heavan I reckon.....Quote

murphy7801
Quote:
The side of that actual case they used isn't that pretty and could have more bling lights. No I agree would like to know what only gives it a 9. Did it come in a ugly box ?Quote

JCBenton
"That's the way it should be."