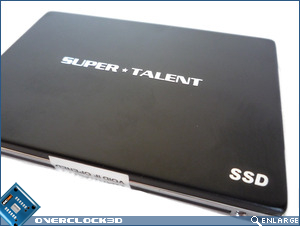 If you take a look at the IT Market at the moment, the most talked about technology at present has to be SSD drives.  The HDD has a been a storage medium that has long been overlooked in my opinion.  Yes we have had advances in drives physical sizes and capacities but nothing that has really set the world alight.  That all changed when the first generation SSD drives were made available. These were prohibitably expensive though and only within the reach of the wealthy or crazy, or even both depending how you look at it.   That has now all changed.  In the last 8 months or so we have seen an influx of SSD drives of varying sizes and prices, some offering excellent performance others just plain outstanding.  Looking back at the results we have seen over the last 6 pages of testing, we can see that SSD drives as a whole have improved massively what was once the main bottle neck in any PC, all we need to wait on now is an increase in the storage capacity of SSD's.
Taking a look at the Super Talent  FTM28GX25H, I have to admit was a pleasure. Having moved over to SSD from a Western Digital RE3 drive I would never move back.  The performance is blisteringly fast and as the drive uses the Indilinx Barefoot controller along with 64mb of onboard cache, there is no sign of any stuttering issues which plagued the first generation SSD drives.  However, I was surprised that the Super Talent user guide did not mention some of the recommended performance tweaks (in fact not only do these tweaks improve performance, they can also increase the life span of your drive) such as disabling superfetch, turning off defrag and also disabling the page file or setting it up on alternative mechanical drive, whether this would effect performance of the FTM28GX25H in the long run or not, remains to be seen.  During testing, the drive performed perfectly with only the ATTO 32k Read test displaying a slight annomoly as the results were down against the OCZ drives.  However, retesting produced the same results.
Right from the start the Super Talent  FTM28GX25H surprised me with an average read speed of 220 MB/s in HD Tach and a burst speed of 181.5MB/s which, is not to be sniffed at.  The drive then held its own in the CrystalDiskMark test suite against both the OCZ Summit and Vertex, while the ATTO Disk test suite further confirmed that the FTM28GX25H was a drive worth paying attention to.  The PC Mark Vantage  HDD test suite also added to the performance credentials of the drive placing it ahead of both the OCZ Summit and Vertex in nearly all the tests.  The Dummy file creation test placed the FTM28GX25H slightly slower than the OCZ parts, but only marginally so and this was then improved on with the Unreal Tournament III Level loading and the Windows Vista Startup and Shutdown trials.
So, what can we conclude from the suite of tests we have thrown at the ST FTM28GX25H?  Well I can say for sure it's an excellent bit of kit: performance is excellent, beating the OCZ offerings in mosts tests with the promise of more to come as Super Talent release newer firmware.  I was a bit disapointed by not being able to see the quoted read/write speeds of 260/195, as mentioned though perhaps the performance will improve when the firmware matures.
If your looking to make the move from a mechanical drive to SSD, I can certainly recommend the  Super Talent FTM28GX25H it offers lightening performance in both Read and Write tasks with near zero access times.  One thing I have to say though, Super Talent, if your reading this jazz up your naming convention, FTM28GX25H doesn't roll off the tongue easily now does it?
The best price I could find for the Super Talent FTM28GX25H was approx $315usd on Newegg. I am currently unable to find a UK vendor with any pricing or stock.  Bang for Buck?  I certainly think so, with excellent performance and zero access times what more could you ask for?
The Good
- Excellent Performance
The Mediocre
- 2 year warranty, while competitors offer 3 years.
- Did not reach the claimed performance speeds
The Bad
- Does not include a 2.5" to 3.5" mounting kit, would be nice.

VonBlade
SSDs are easily the most desirable piece of hardware around. Silent, super fast, cool. This one is fast and reasonably priced. What's more to ask?

It scores 10 on the VB want-o-meter.Quote

Rastalovich
In a climate where we often see the judgement of particularly graphic cards as a matter of £/fps, despite the performance. Would it be a reasonable request to add £/G at the bottom of the comparison table for the range of tested drives ?

Could be a good inclusion in cpu comparisons also being as, looking from the gaming pov, anything above a 3.2g (or so) P4 is regarded as a "minimum" requirement.Quote

Its a good idea and something i was going to include with this review, but as I was unable to find a uk price for the drive it would be unfair to just convert the $ to £ as we know that just does not happen when it comes to pc hardware. If i can find a uk price in the future its something I will be sure to include

100% Agree with you fella, now I would love to find out how they would perform in a raid 0 setup

Will have to wait until their available in the uk though.Quote

If it's to be likened to the £/FPS comparison, then surely it would need to be £/Read & Write speed.

Think I know what I'm getting at.