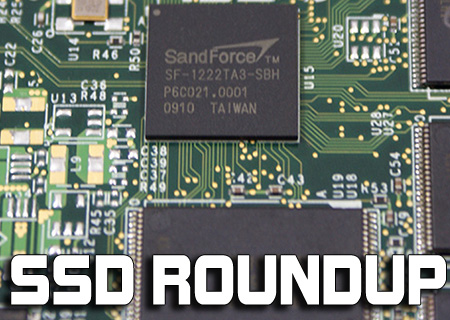 Solid State Drives are constantly becoming cheaper and cheaper, whilst the performance is increasing massively from the first ones that we tested. Of course if you're going to grab a SSD you want the best performing one you can, and that means going SATA3. Even the average models will max a SATA II connection and its 300MB/s cap.

Benchmarking is always a tricky balance. On the one hand we want to give you the most up-to-date and relevant benchmark tests possible, but equally data in a vacuum is pointless and so we can't just endlessly chop and change.

One area that has been in need of some tweaking has been our storage testing though. A lot of the benchmark suites we've been using were originally designed with mechanical drives in mind rather than the blistering pace, and abilities, of Solid State Drives. As our storage reviews have solely focussed upon SSDs for a long while now, Velociraptor RAID notwithstanding, we felt it was time to finally refresh our suite.

Enter the Anvil SSD Benchmarking tool. This provides the simplest 'one stop shop' for testing Solid State Drives and is the most consistent method we've found to obtain the all important IOPS result. Regular readers will remember our brief trials with IOMeter for these, but Anvil manages to be both easier to use, much easier to configure, and more reliable with its output.

So we felt it was time to give a roundup of some of the most popular SATA 6Gbp/s SSDs on the market and see which one of them will come out on top.

We have four of the main drives on hand, the Intel 520, the Mushkin Chronos, the Corsair Force 3, and the Kingston Hyper X. All of these drives are the 240GB versions, so that we'll be comparing like for like. This is important as different sized Solid State Drives have differences in performance.

airdeano
bravo... awesome review. thank you for the information, testing and evaluation. puts a better light

to the SSD market. and thatll change with the months due to more and more technology and users of SSD.

steve30x
The prices are finally coming down now and should be a reasonable in price within the next two years hopefully so it will be time to upgrade to SSD when that time comes.Quote

Leerooy
Interestingly enough, I was reading an article on Tom's Hardware that took a look at Toshiba's 400GB Enterprise SSD, a $7000 USD SSD. In their testing, the Intel 520 outperformed it in many regards as well. I never really looked at SSDs and compared them but these last two articles I have read from two sites I trust have me very impressed with the Intel 520 Series, to say the least. Well done on the review.Quote
Reply