There have been few hardware items that have seen such rapid development as storage. Sure processors get incrementally faster and have a few more cores now and then, and a graphics card can gain performance through the addition of extra cores and some architectural improvements. But Solid State Drives have changed so quickly they have rapidly moved beyond all recognition. A few years ago 500MB/s drives were blowing our minds, and using them in RAID to get 1GB/s seemed to be so fast that nothing would get near it for a long time. Then came Intel's NVMe and a swathe of motherboards supporting both M.2 and U.2 drives.

Samsung, as befits a Memory chip giant, have been at the forefront of this move into the stratosphere. We've seen how quickly their 950 M.2 drive was in a previous review, and with the 960 Pro they promise to have built upon the capabilities of the 950 and refined them with the implementation of a new Polaris controller, improved V-NAND and combining the 1.2 NVMe protocol with improved Windows 10 drivers to give professional users, enthusiasts, and those who work in seriously demanding productivity scenarios a storage option that will keep even the most bandwidth heavy user sated.

So check that your rich relatives catch pneumonia and settle in as we take a look at the Samsung 960 Pro M.2 NVMe drive in its 2TB capacity option.

The major improvement of the 960 Pro when compared to earlier offerings has to be the Polaris controller which usurps the UBX controller that was included on the 950 Pro. The Polaris has five cores - rather than the three of the UBX - and dedicates one of them to controlling the data flow between the host and the controller itself, enabling enormous performance regardless of how many operations are in the queue. Add this to the 48 layer V-NAND and a redesigned heat spreader to cope with the tremendous loads and you end up with something which is not only much faster than anything that has come before in burst scenarios, but also in the all important sustained load demands.

Note : Windows 10 comes with a NVMe driver of its own. However, it's extremely limited at these levels of performance, so all of our testing was done with Samsung's own v1.1 NVMe driver. We'll mention this again in our conclusion, but just as an example on the Windows 10 driver we saw 1MB/s write speeds, whereas the Samsung driver gives us 699MB/s. So if you have got enough money to buy a 960 Pro it behooves you to seek out the official driver too. 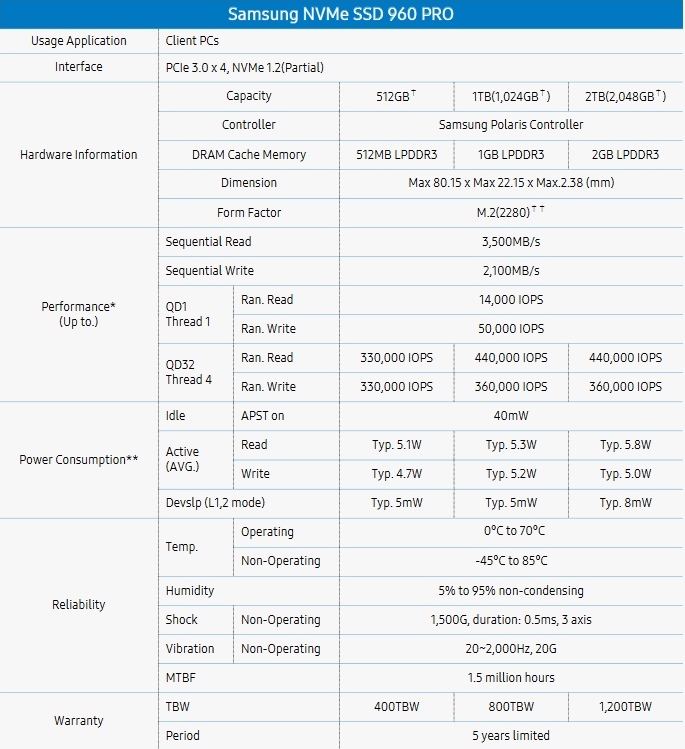 Dawelio
The desire to want one of these is just so painful....Quote

Luscious
What's the trick to get Windows 7 to recognize it as an install drive?Quote

NeverBackDown
I was thinking getting a new 950Pro, but for only $15 more I could get a 960 Pro.. OOOOh soooo tempting. It literally hurts wanting it so bad but knowing it would be a stupid financial choice for me right now