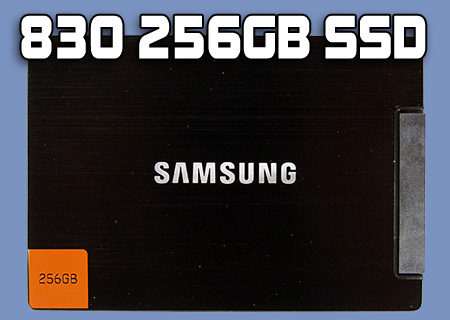 We've taken a look at a lot of SSDs in the past year or so here at OC3D, and whilst the controller used can vary wildly between models, we nearly always see the NAND Flash being provided by Samsung.

Of course Samsung are a huge name in the electronics industry, supplying everything from cameras to giant plasma screens. It's their RAM department that we most often come across. Not only do they provide the RAM chips that are in the vast majority of DIMMs, but most of the SSD RAM too. So rather than constantly provide to third parties, Samsung have branched out into producing their own range of Solid State Drives.

Today's review is of their high-end model, the 830. This is available in a variety of sizes from 64GB up to a whopping 512GB and takes advantage of the 6Gbp/s available from SATA3 to hopefully provide huge read and write speeds. The model on test is the 256GB, which nicely balances between price and capacity.

As well as 256GB of storage, the 830 comes with Samsung 256MB of DDR2 cache, Samsung's S4LJ204X01-Y040 controller and eight of their popular HCK0 NAND Flash chips. There is no denying that they've grasped the opportunity to keep everything in house with both hands.

badtaylorx
i wonder if samsung can come up with a spinpoint equivalent ssd drive.....by that i mean achieve the same success with a low price and a good drive???Quote

f0x.
I personally don't see samsung shifting alot of SSD's until the £ per gig ratio comes down alot, Personally I would spend up to £100 on a good boot drive, but I think £300 is asking a bit much. Especially when you consider a 80gig SSD and a terabyte can be had for the same money(even at today's stupid prices), and makes more sense for most people.Quote

ionicle
id go for a 64 gb boot drive, and a 2tb storage drive

i dont see much point in any bigger than that in SSD until OS's get bigger ...Quote

Solidarity
It's a terrific looking drive. I hope to see more from themQuote

Timbaloo
No ancient storage media will ever see my system again

I just love the speed and the silence too much