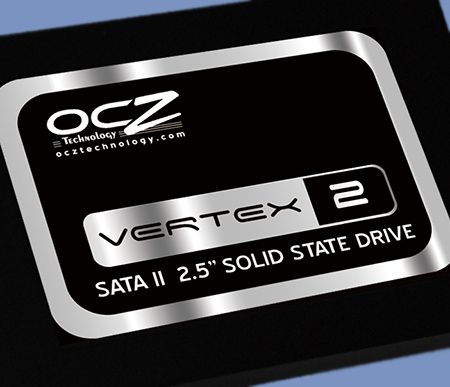 When Solid State technology first appeared on the marketplace it took a little while before the full benefits of it were felt. Not in terms of marketplace saturation, or pricing, but in pure unadulterated performance.

OCZ Technology were one of the first companies to really bring us a drive that was a leap forward over the current mechanical drives when they introduced the Vertex series. It quickly became the weapon of choice for the early adopters and found homes in many high-end systems.

Since then controllers and chips have become much more homogeneous and differences are far less apparent between read speeds of even the base models in a companies line. Write speeds have become the defining factor that separates an "average" SSD from the high performance variants. Of course average in SSD terms is still a quantum leap forward from mechanical drives.

Today we take a look at the OCZ Vertex 2, the follow up to the extraordinarily successful Vertex. Will it be yet more of the same, or has it got enough to keep it on everyones short list?

As always here at OC3D we want to make absolutely sure that not only do you have the most accurate information, but also that manufacturers aren't making unsubstantiated claims. Therefore we always ensure we take the technical specifications from the official website. With SSDs this naturally, much like the testing, ends up being fairly simplistic. How quick is it, and that's about it. Note that although performance figures for the 3 lower capacity drives are beneath those quoted here, for brevity we are only using the ones that we should obtain with the model on test today.

All fairly standard stuff. I'd love to have one of these long enough to find out the accuracy of that meantime before failure, but even if I did I don't think I'm going to live another 171 years, so it's safe to say that it will outlive all of us. Time for a look at what we have.

Bungral
Bit poo really compared to some of the competition for the price.

Nice review as ever though

Gave me something to read when the forum was down.Quote

alienware
Wow, not so good then that one.

Crystal hates my X32. Reports it wrong, runs like a dog and gives terrible results. ATTO. That really seperates the men from the boys

gdawg304
Interesting....I've seen other really good reviews of the Vertex 2 (primarily the E versions) and indeed I bought a 60GB Vertex 2E on the strength of one. It's certainly snappy enough running Windows 7. ATTO gives 280MB/s read and 260MB/s write but I gather this is something to do with how the SF controller deals with different data compression?

Although now I'm thinking maybe I should have got one of OCZ's bootable PCI-E drives instead!Quote
Reply