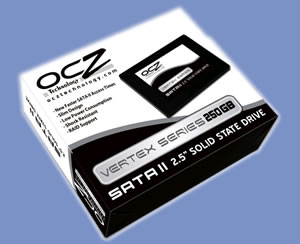 Back in July '08 Overclock3D got its first introduction to the Solid State Disk. Supplied in a 32GB capacity, the very first OCZ SSD to hit the market failed to impress our team with performance levels below that of the Western Digital Velociraptor 300GB mechanical hard disk. Not only that, but price and capacity were also major downfalls of the SSD due to lack of space after installing the bloated Vista operating system, and a price tag that although reasonable in comparison to other SSD's on the market, still couldn't be justified. As a result the OCZ 32GB SSD left Overclock3D awardless with it's tail between its legs.

However, unfazed by this OCZ continued to pursue perfection in the SSD arena, coming out with several revised versions of their 'Core' SSD series in an effort to improve performance and compatibility. Now, almost a year after our initial review, OCZ have a full range of new SSD's (Solid, Core, Apex & Vertex) aimed at all areas of the market from the budget to the high-end. Today we'll be taking a look at the latter of these disks in the form of the Vertex 120GB SSD, and what better place to start than some snippets from OCZ's website:

Offering your system the incredible performance of flash-based technology, The OCZ Vertex Series delivers the performance and reliability of SSDs at less price per gigabyte than other high speed offerings currently on the market. The OCZ Vertex Series is the result of all the latest breakthroughs in SSD technology, including new architecture and controller design, blazing read/write speeds, and 64MB of onboard cache. OCZ continues to place solid state technology within reach of the average consumer, and delivers on the promise of SSDs as an alternative to traditional hard drives in consumer targeted mobile applications.....

Starting with the basics, the Vertex series is available in sizes 30GB - 250GB. This is a massive improvement over the sizes available last year and thankfully prices have also taken a nosedive too. OCZ claim that the Vertex has an MTBF (Mean time between failure) of 1.5million hours which roughly equates to 170 years, but unfortunately for only two of those years is the drive actually under warranty. Power consumption is extremely low using only 2w during operation and 0.5w in standby, offering marginally increased battery life for laptop users.

Interestingly read and write performance figures vary depending on the capacity of the drive. Naturally you'd expect the smaller drives to have the best performance, but from the specs OCZ provide this is simply not the case, with the fastest drive being the 120GB version and the 250GB coming in a close 2nd.

Now that we've got all of the paper specs out of the way let's take a closer look at the drive.

PeterStoba
Coming to a server near you soon?

Nice speeds, the price still lets them down though

AntiHeroUK
Great review Jim. I'm glad to see that the stutter that plagued previous SSDs has been eradicated. The price is still a little high, but it's good to see OCZ progressing with their SSD line-up.

Great performance but surely the cost needs to come down and the capacity up for them to become viable for the mainstream.

°TheMadDutchDude°
Fantastic to see them coming along like this. However, prices let me down hugely and therefore I won't be getting one for at least another year. I wish the prices would come down faster and become more main stream like 500GB HDDs

monkey7
Price is going down, continue that trend and we might all buy one next year

Very nice review, thanks for the read.Quote
Reply