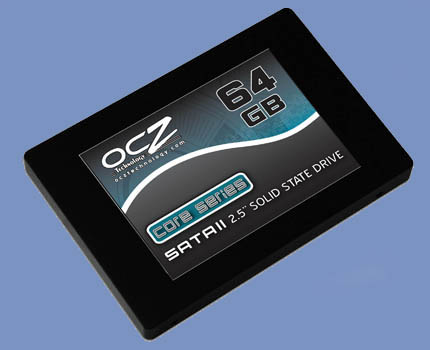 There have been many advances in PC technology since its birth some 25 years ago but the humble hard drive has seen little in the way of enhancements. Interface, platter and spindle speed have been improved drastically but due to the now somewhat dated mechanical design, the performance of such drives has almost reached a standstill. The advent of SSD (Sold State Drive) is about to change all that but unfortunately, price and capacity is an issue for most consumers looking to take advantage of the new technology on offer.

Enter OCZ. We recently reviewed OCZ's first entrant into the SSD arena with the 32GB OCZ SSD and although it was a very good performer we were disappointed that it didn't exactly show the leap in speed we were looking for compared to the best performing mechanical hard disks available. So, after lengthy discussion with the guys from OCZ, they sent us another drive but this time from its 'Core series' which promised to be even faster than the previous drive. Never being ones to just accept that fact we have hooked the drive up to our test rig and will compare it to the previous drives tested to see if there is indeed a leap in performance.

The Core series of SSD's uses highly reliable NAND Flash chips with a capacities up to 128GB. Due to the chips low power requirements and shock resistance it is the perfect alternative to conventional hard disks and ideal for mobile computing solutions. Today however we will be hooking up to a 'desktop' PC to see if it really can replace the larger, noisier, heavier HDD form factor.

Luigi
Ooh, its looking better for the SSd market, still a long way to go though...

Nice review, but the forum link at the end doesnt work

Hassan
I could do with one of them and slap it onto my laptop. Oh sometimes I just wish my HD on my Laptop was faster.Quote

Luigi
my dads laptop has a g sensor, the moment you touch it the HDD freezes.. its a touch over sensitive lolQuote
Reply