There is almost an inventors paradox. The person who comes up with an idea is usually the one who benefits the least from it. It's not the initial idea that makes the money, it is finding a target market for a particular solution and refining the item until it is usable by the largest number of people. The Wright brothers barely got off the ground, Richard Trevithick (inventor of the Steam Locomotive) died penniless, Benz invented the car but Ford brought it to the masses. Laserdisc, Betamax, MPMan, the market is awash with outstanding ideas that needed a major corporations backing to attain success. When you think back across the lifetime of computing, particularly home computing, there are also products which have become legendary as ones which led the way. The advanced guard as it were. They weren't always the most successful, nor did they always sell in great numbers, but what they did was open a door and give you a glimpse at a future world. Rendition Verite/PowerVR and the like are barely a footnote compared to 3DFX Voodoo but led the way.

What has that to do with today's review of the Optane 900P? Well it's a product which very much is based around a technology more likely to be useful to enterprise solutions than the average end user, yet it also has enough advantages that in time it will probably be the industry standard in the near future, barring some yet unknown technology appearing. What it has ahead of the examples in our opening paragraph is the backing of an industry giant, namely Intel. We're sure we don't need to remind you that Intel are hardly some purveyors of Silicon Valley Vaporware.

The Optane SSD 900P builds upon the speeds we've come to love from solid state drives and utilises 3D XPoint instead of the more common NAND to bring class leading random read/write performance, latency (10 microseconds) and longevity to the table. This allows for extremely high throughput at low queue depths, perfect for improving compute performance in multiple core systems. So, as we say, a whole raft of features that will be of enormous benefit once the mass market catches up, but for now look - on paper at least - like something that will be more beneficial to enterprise users and server farm owners than regular desktop owners.

Is that the case? That's what we're here to find out. 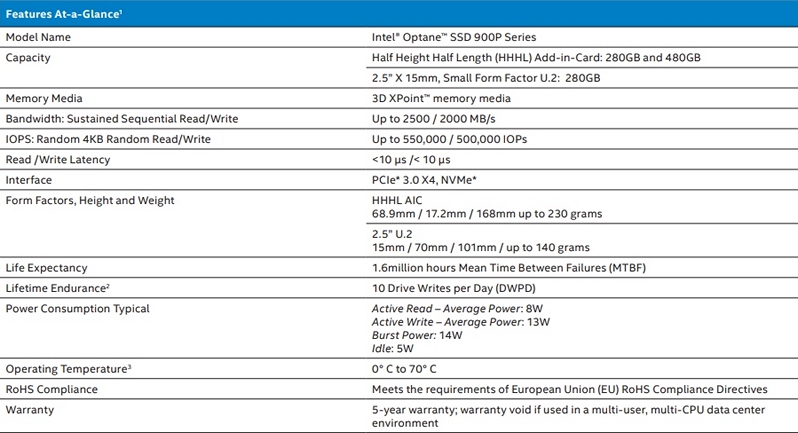 Excalabur50
Nice review Tom, I have the PCIE 900P and I like the drive yes it's expensive but when loading Star Citizen it comes into its own then, the other thing that I like is the drives longevity compared to other offerings, which only time will tell if that bares out.Quote

NeverBackDown
Quote:
it's slow to load even on a SSD?Quote

Excalabur50
Quote:
Not slow as in mechanical but SSD's are still not quite as good as the Optanes when it comes to loading SC but that'll improve over time when it comes out of alphaQuote

Is that not the envrionment the review says the drive is ideal for? Other reviews give the drive a recommend (price issues asside) due to the low queue depth performance making average PC use snappierQuote
Reply