Solid State drives have come a long way since the early days. They are now searingly fast at even the smallest capacity, and the movement towards more mature hardware controllers and operating systems being more adept at utilising them has meant that you can purchase almost any model with a warm glow in your heart.

There is, however, always the underlying niggle that perhaps your drive will give up the ghost out of the blue and cost you immense data loss. After all a mechanical drive starts to knock and click before it dies which gives you enough warning to attempt to back up. What we really need is a SSD that has the raw speed of a desktop model, but with the reliability of an enterprise solution.

The Intel 730 Series is exactly that. Combining Intel's enormous knowledge base and workstation experience with the speed demanded of desktop users, it hopes to be all things to all users. That's a bold target to aim for, but if anyone can bring it to fruition then Intel surely at the company to do so.

Rather than take a controller such as the SandForce one and crowbar it into their product, Intel have created their own 3rd Generation SSD controller that is capable of dealing with the demands of uncompressed data that modern operating systems place upon it, and then overclocked it all to eke even more performance out. The controller is greatly increased, up from 400MHz to 600MHz, and even the NAND bus speed has been bumped from 83MHz to 100MHz. Even with the 480GB capacity model we can't foresee many people going beyond the 70GB/day endurance quotient. 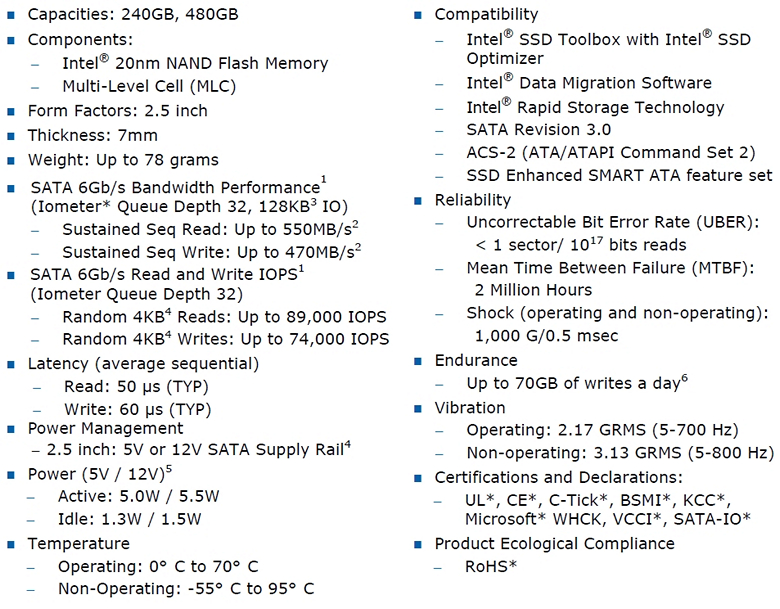 Excalabur50
The original Intel drives were the drive to go to till the Corsair and Samsung drives took over I wonder will these put Intel back on top?Quote

All the bloody decent SSDs on the market are capped by the interface, and making better drives isn't going to change that.

qhfreddy
Quote:
Ok, well can someone get PCIe down to the same price as the SATA ones?Quote

Vlada011
Very nice drive only Intel force people to pay 480GB version because difference in performance are bigger than other drives.
I decide too, no more SSD until SATA Express.
If Intel leave Haswell Extreme with SATA III than solution is PCI-E drive when they show up. Haswell Extreme was real time for new standard but if I remember they talk about Skylake and SATA Express.Quote
Reply