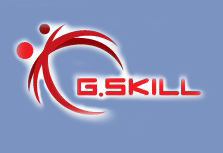 Heralding from Tapei, Taiwan, GSkill are leaders in extreme performance memory and storage solutions so it should come as no surprise that they are hoping to be number 1 in the area which combines both specialities, the Solid State Drive. These storage solutions are now arriving to the market in droves and while the price is still high in comparison with their mechanical counterparts, advances in speed and technology have increased dramatically, inevitably keeping the cost of this new technology high.
Innitially, SSD's came with little or no cache memory and while write speeds were amazing, the drives suffered terribly with writing small chinks of data. Manufacturers have now countered this with super quick cache memory which prevents the stuttering encountered previously. The GSkill Falcon is one such drive which carries 64MB of cache. The drive runs with a combination of an Indilinx controller and high speed Samsung memory chips with advertised speeds of upto 230MB/s read and 190 MB/s write (100MB/s sustained).
Those Samsung chips are Multi Level Cell varients and while traditionally, MLC is slower than SLC, the advances in the cheaper MLC chips have now surpassed SLC chips. No doubt SLC will once again reign supreme but I am never one to complain about technology on the cheap. Not only that but as the Falcon is built with the same memory and controller as the fantastic OCZ Vertex yet it weighs in at a lower price it seems we may have a new champ on the cards.
Let's take a look at the specification of GSkills latest SSD:
Model Name: FM-25S2S-128GBF1
Form Factor: 2.5"
Capacity: 128GB**
DRAM Cache: 64MB
Interface Type: SATA II
Read Rate: 230MB/sec(Max)
Write Rate: 190MB/sec(Max)
Sustained Write: Up to 100MB/s
Access Time: <0.2ms
Shock (operating): 1500G
Vibration (operating): 20G
Altitude (operating): 60000ft
Operating Temp: 0oC ~ +70oC
MTBF: +1,500,000 Hours
Data Reliability: Built-in EDC/ECC function
Certifications: RoHS FCC and CE Compliant
Warranty: 2 year
As you can see from the specification above, 230MB/s read and 190MB/s write is certainly a recipe for one swift SSD. While the write speed is a little lower than the 250MB/s OCZ Vertex, the write speed of the Falcon is 10MB/s above the 180MB/s the OCZ drive can offer. How this translates to read world performance we will find out later in the review but for now let's take a look at the packaging and appearance of the GSkill 128GB Falcon SSD...
«Prev 1 2 3 4 5 6 7 8 Next»

How did this go un replied to?

I have an excuse... I had 800 posts to catch up on and then I save the reviews for last.. This is my last one so I'm now officially caught up.

Aaaanyway back to this review.. What a product really.. It actually beats the competition by a clear margin (mostly) which makes a change these days.

Don't ya get to keep this one Jimbo?

w3bbo
No! Jim certainly doesn't get to keep this one lol.

Gotta say this is one sweet product!Quote

Great review as always, I just find it hard to get excited about SSD because they're so freaking expensive. I'm sure they are quicker, but I come from the tape then floppy days so HDs still feel fast to me. But no matter how fast they are, 128GB of SSD vs 4TB of Spinpoint is a no brainer.

Rastalovich
Quote:
I have another theory behind this, and b4 u all yawn with excitement

I do wonder if any1 else agrees with me on this - I would appreciate if they replied in agreement or not.. BUT..

I saw this review posted.. and I have tbh, skipped it. And as I thought about skipping it, I thought others will skip it too, from a reply pov, and here's my rationale atlest:

I can sum up the review without a read, 1x SSD, blazing speeds, low relative capacities, nice package with little content, extremely high price (£2+ a gig). To be fair this is all I/we need to know. The values can fluctuate a bit, but aslong as that last, almost the most important figure remains at around £2+ and the relative capacities are low - the interest stops there.

This is no reflection on the reviewer, as always I know the review will be outstanding. The reviews are always at a high level on OC3D.

However, until the manufacturers take their mindset away from corporations wanting these for their drive bays in their lovely raid setups, not minding paying £10k for the privilege, ur average enthusiast isn't going to be interested without some exception.

U know they're intended for these markets as they're content to stick with the lower capacities that almost mirror SCSI drives in similar raid setups (which are faster according to HDTach presets).

Now we've seen 320g drives emerging, so 250g will very soon be the distant maximum. No doubt 640g drives will follow eventually - but I can guarantee u that they won't come out until they've milked the higher prices of the lower capacities.

Soon as we atleast see £1.5 a gig. The masses will take more interest.

It's very basic for an enthusiast. They can't buy 2x GTX285 gpus - why spend the same budget on a small harddrive.

w3bbo
I see your point rasta and I do agree about the cost per gig which is terrible however, SSD's represent the best upgrade most consumers can buy. The general feel of the OS is so much snappier, it loads up quicker, as do games. I bought 2x1tb samsung F1 drives a couple of months back and after testing this drive I am regretting that decision. Sure it's nice to have oodles of storage (of which I now have 2TB!) but nothing can match the speed of SSD for desktops imo.Quote
Reply