With most M.2 drives the target audience is clear. They are, after all, the near ultimate expression of the 'performance above all else' ideology, second only to CPUs. However, the dedication to the aesthetics of the Gigabyte Aorus RGB M.2 drive are such that you might very well have your interest piqued even if you weren't planning to add another drive to your setup.

Firstly then the looks. Although many motherboards come with a built in heat spreader for the M.2 drive, many don't. Those that do usually include it in the chipset heatsink and, to be honest, look a little too plastic to really get your juices flowing. The Aorus however really pushes the boat out and has a heat spreader which we would be pleased to see in any system, let alone as a harmonious addition to a Gigabyte Aorus motherboard. The metal finish is very high quality and lends a premium feel in the hand. Although we'll get to the performance in a moment it isn't just about the looks either, as the drive ran flat out throughout all of our tests so it clearly helps keep it all cool too. Form and function in one package. Obviously the RGB logo is the USP of the Gigabyte Aorus drive, and it works extremely well and is easily controlled from within the Aorus lighting software. It's also, for want of a better word, generic enough that if you had it in a competitors motherboard it wouldn't look out of place. If you know, you know, if you don't, it doesn't matter.

Looks are nothing without performance though. We know that some people will be delighted enough with the aesthetic that as long as it's good enough that'll be alright, but thankfully it is way better than that. We've seen lots of storage specifications that proclaimed one speed and delivered quite another, but there are no such shenanigans with the Gigabyte Aorus. It was exactly as fast as advertised and consistently so too. If you ever fear that the heat issues which can plague lesser drives might show their head and dampen the blistering pace then have no such worries. The heat spreader does its job and the component selection is good enough that it ran flat out, all the time. Read speeds are outstanding, but the write speeds really show how much the competitors have put all their eggs in the read basket as the Aorus ended up much higher in our write graphs than it did in the read ones.

So it looks incredible and goes like a stabbed rat. There is nothing not to like about the Gigabyte Aorus RGB M.2 whether you want a drive that goes supremely quickly, a drive that looks amazing, or some combination of the two, made all the sweeter by the barely believable price tag of a mere £114 for the 512GB model. 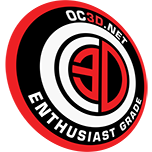 Dicehunter
512GB for a hundred real ale coupons is insane !!!

Glad prices are finally starting to come down to Earth.Quote

Dark NighT
Apart from the logo, i really like that shield! That price is very good and i hope more brands follow it soon.Quote
Reply