When it comes to SSDs, there are two main types of consumers on the market, those who desire maximum performance and those who want SSD-grade performance with the highest capacity/cost ratio.
Today the fastest SSDs can use the new NVMe memory interface, coming it with levels of performance that are often several times more than traditional SSDs and significantly higher prices. These NVMe SSDs are the future of system storage, but for now, they are simply too expensive for mainstream use.
NAND memory is also changing, moving from traditional planar designs to become towering 3D structures, which can offer higher speeds, larger storage densities and even higher reliability. These new NAND designs are very attractive to SSD makers, but for now there is simply not enough supply from major NAND manufacturers to adequately supply the industry.
After Samsung, Crucial is the first SSD manufacturer to release a consumer grade SSD using 3D NAND, this time using NAND from Micron instead of Samsung's homegrown 3DNAND design, which is designed to offer greater reliability, capacity and pricing rather than the focus on extreme speeds like Samsung 3D V-NAND. This first released to consumers as the limited edition Crucial MX300 750GB.
Since then Crucial has released four new versions of their MX300 drives due to their sheer popularity, now offering 275GB, 525GB, 1050GB and 2050GB SSDs, all of which offer some attractive price points for mainstream PC builders.  These drives are available in both M.2 and 2.5" variants. 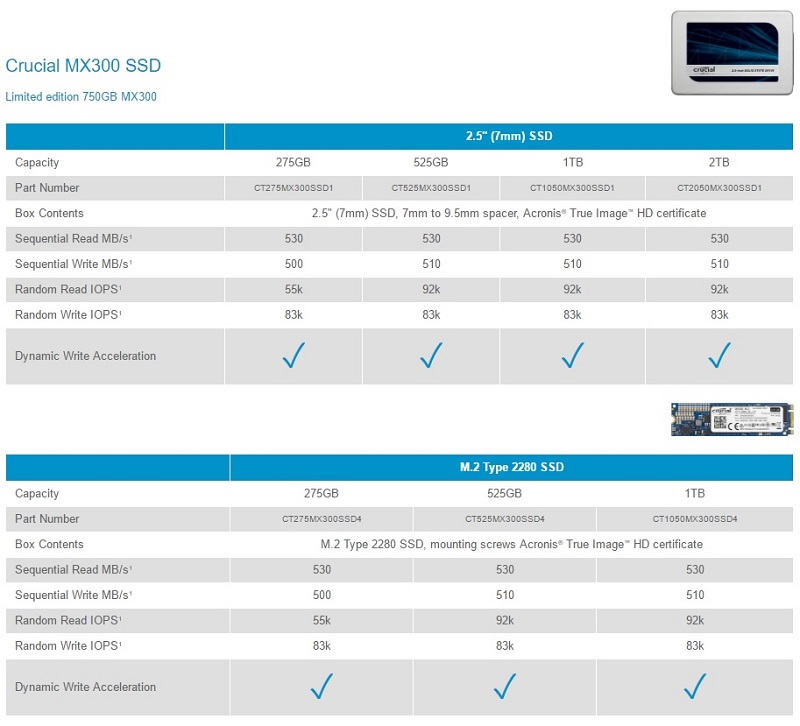 Even I'd have trouble filling thatQuote

WYP
Quote:
You would be surprised how quickly we could fill it. All out GPU benchmark games alone would take up most of it.

It is nice that this SSD does offer quite a large capacity, as 1050GB is a lot more than the 960GB drives we commonly see these days.Quote

Kushiro
Was going to sayQuote
Reply