Beastly on a budget!

Since SSDs first became popular and affordable for consumers and enthusiasts, Corsair have always been at the forefront of releasing new ranges of SSDs in order to stay competitive in the market. The barriers to entry for the SSD market have actually been relatively small as far as PC components go. Companies such as Hynix and Micron produce most of the memory chips themselves, and a few years ago Marvel and Sandforce produced the only SSD controllers available. This meant any company able to get partnerships with one of the memory chip producers and a controller producer could quite easily put together an SSD. However, Sandforce controllers were very unreliable in certain models and caused failure rates as high as 30% in certain SSDs. This prompted the larger companies such as Samsung to take matters into their own hands and produce their own controllers, whilst many other companies switched from Sandforce over to Micron.

Corsair are one of these companies and their latest Force LX range sports the latest controller technologies, capable of reaching great speeds at an affordable price point.

The Force LX series comes in three different models; a 128GB, a 256GB and a 512GB version. We test all three to show you how they're capable of performing. 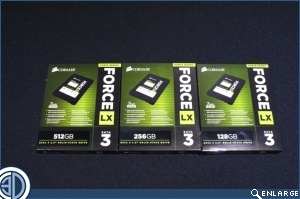 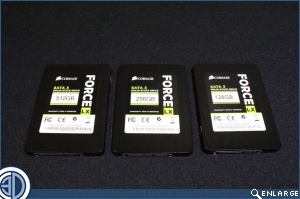 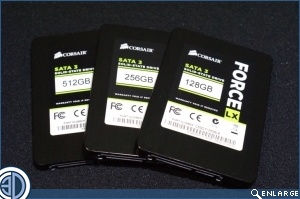 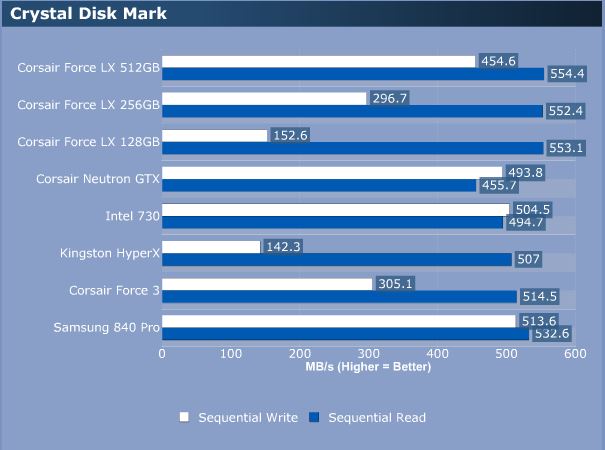 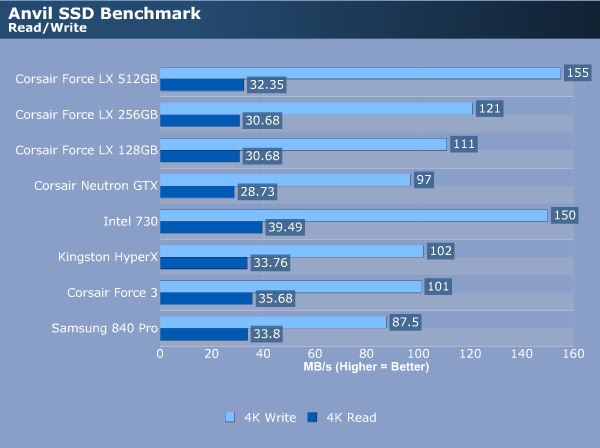 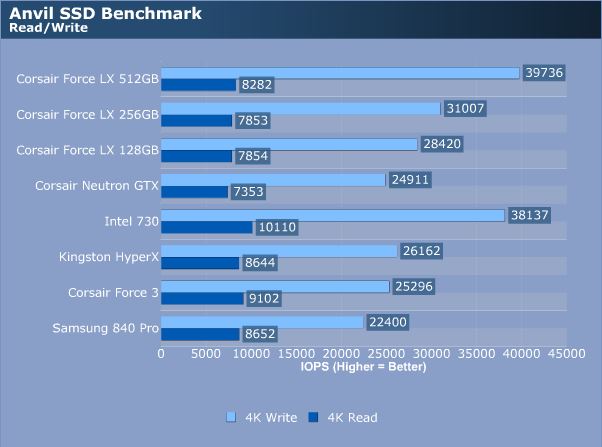 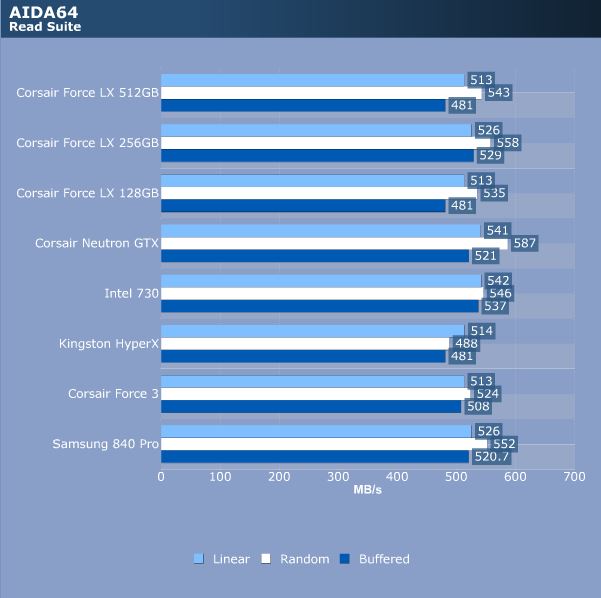 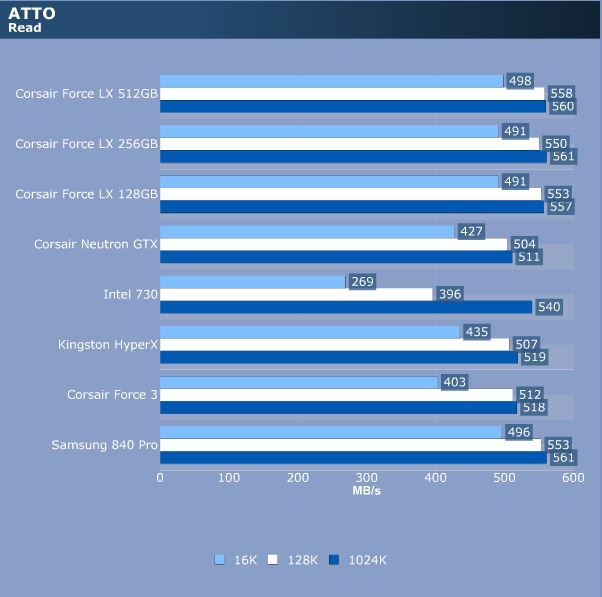 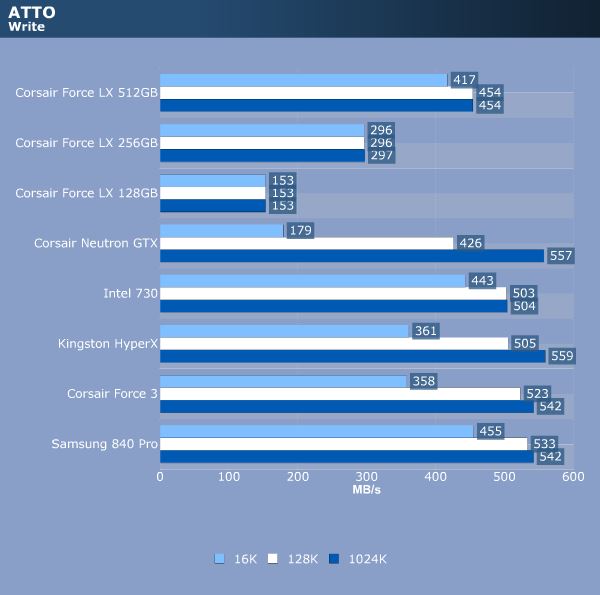 To start things off, we think it's worth mentioning the price of these SSDs before getting bogged down by performance figures. The 128GB version comes in at around £55, the 256GB version at £93, and the 512GB version at £180 ($80, $130, and $250 respectively in the US). SSDs recently have gone down in price fairly substantially, but still, all of these prices are on the lower end of what you would expect to pay for SSDs of their comparable sizes. As a comparison, the Corsair Neutron series, which is intended to be one of the highest performing drives available is almost double the price of the LX series in all three categories. It's safe to assume the LX range is more of a budget solution for SSDs, making the performance per pound more impressive.

Starting with Crystal Disk Mark, we see the LX series capable of reading around 553MB/s across all three drives. This is one of the best scores we see across the whole range of SSDs we've tested and we have to say we're incredibly impressed by the read figures for a budget SSD.

In producing SSDs, manufacturers will stack memory chips rather than using a single memory chip with a huge capacity. For example, a 128GB SSD may be made up of 4x32GB memory chips, and then a 256GB SSD of the same range may then encompass 8x32GB memory chips. In essence, this means when you write data to your SSD, the SSD can split up the data and write it to each memory chip, meaning it can write data onto a 128GB SSD with 4x32GB four times faster than if they were to use a single 128GB memory chip. Now of course when we increase the capacity, data can then be written to more memory chips, and therefore the higher capacity SSDs will be faster. This shows completely in our testing of the range of Corsair LX drives. The 128GB version only managed 152.6MB/s write speed, and so its only comparable 128GB competitor here is the Kingston HyperX drive which it beats. Similarly, the 256GB version just falls short against the older Corsair Force 3 drive which is a little shame. The 512GB does fall back a little more against its competitors by around 50MB/s, but since this is a budget drive competing against more expensive options, we can't criticise the LX series too much here.

However, the Crystal Disk Mark tests were run using sequential testing, and when we reduce the data blocks to 4K, things do pick up a little more in terms of writing capabilities. The read speeds do fall a little behind in these tests, but considering they are still incredibly close it isn't really an issue at all. In 4K writing, we again see the staggered results between the different capacities which is expected, but in each category, the respective sized LX SSD beats its competition. Even the 512GB version beats the 480GB overclocked Intel 730 SSD which we weren't expecting, and we do have to credit Corsair heavily on these 4K speeds.

Corsair have produced a set of budget SSDs that in our testing really didn't perform like they were in a 'budget' category. The read speeds at sequential were faster than anything else we've tested although the write speeds here did fall behind a little, and the write speeds at 4K did really impress us, although this time the read speeds here fell behind. Overall, we are incredibly impressed by the amount of performance Corsair have squeezed out of the LX series. We're awarding the 512GB Corsair LX the OC3D Gold Award, and we're giving all three versions the OC3D Value for Money Award.

Thanks to Corsair for providing the SSDs for review. You can discuss your thoughts on the OC3D Forums.

WYP
Great to see such a solid performer at such a great price. Corsair have done a good job here.

I also like the Ali enclosure, looks very Samsung.Quote

barnsley
I might have to ignore my previous embargo on corsair SSDs to pick a 512gb one of these up. Fantastic pricingQuote

WYP
One more thing. When was the OC3D logo changed to Orange? Just noticed that.Quote

WYP
Quote:
Red, haha my 2nd monitor is a very old panel with literally the worst colour in the world, But it does the job.

The colours are so different moving screen to screen lol.Quote
Reply