Low-end Hardware - The Era of 2GB graphics cards is over

Low-end Hardware - The Era of 2GB graphics cards is over

Wolfenstein: Youngblood is a game that's designed to run at 60FPS. Anything short of that framerate is downright blasphemous to some PC gamers. So what about old hardware? That's a question that a lot of us ask. Hardware upgrades can be expensive, which means that many of us are forced to make do with what we have.

With this in mind, we have tested most recent PC releases using an AMD Radeon R9 380 and a Geforce GTX 960, both of which were popular graphics cards when they launched. The question now is whether or not these graphics cards, and their 2GB frame buffers, are enough for today's games.

Youngblood's PC hardware recommendations specify 4GB of VRAM as a minimum game requirement. From that alone, we should guess that 2GB of VRAM isn't going to be enough to run this game. Heading straight into Mein Leben! settings at 1080p we are met with a slideshow on the Radeon R9 380, and better (but still awful) performance on Nvidia's GTX 960.

Cranking things down to low presents better framerates, but nothing close to what we would consider stable, or steady. After extended gameplay sessions, stutters and lower framerate dips become more common, with crashes happening in some cases. Combine that with constant VRAM warnings and you are in for a bad gameplay experience.

Even at 720p Low settings with FXAA, we are greeted with the same VRAM warnings and framerate stutters on our Radeon R9 380. On the Nvidia GTX 960, things are better but still sub-par. Our graphics cards have the power to reach high framerates, but VRAM limitations present major issues. 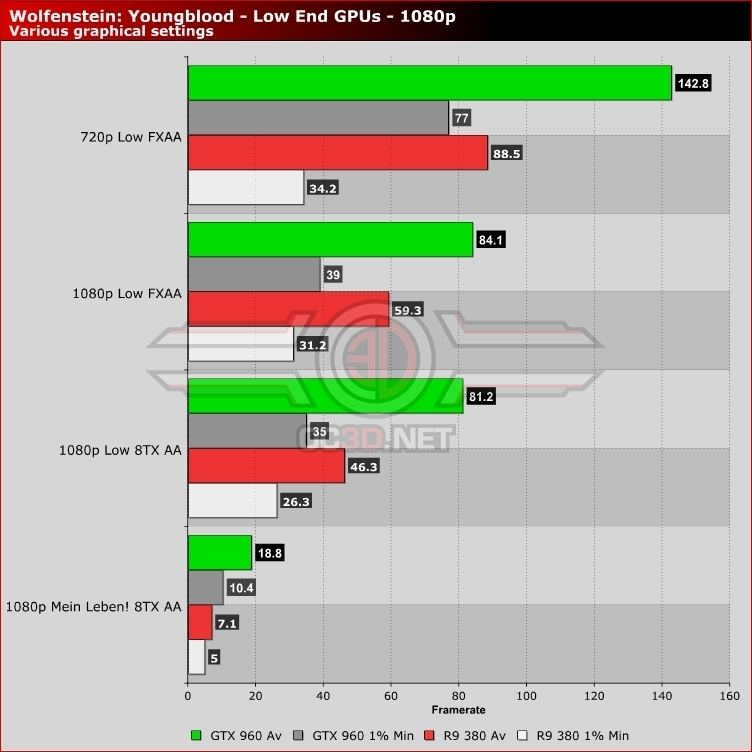