The Total War series isn't your average video game, here battles are not conducted between the player and a few opponents, battles here are conducted with armies thousands strong, a factor that can quickly burn through your PC's resources.

Now before we go any further, we will not one thing. Total War Three Kingdoms can be heavier on the CPU than shown below, but that is only when we intentionally try to push things, either through custom battles in a 4 VS 4 army scenario or when zooming to out on the campaign map as far as possible when your control over half of China, forcing the game to draw up an entire campaign's worth of territory at once. Our benchmarks are designed to highlight typical gameplay scenarios within Total War Three Kingdoms, not edge cases.

In battle, Total War: Three Kingdoms makes great use of CPU resources, making use of every core that we could throw at the game, even on our eight core Ryzen 7 1700X. Even so, the game does get single-thread limited at times, resulting in framerates that are in the high 60s on our test setups. In some more extreme cases dips below 60FPS can occur, even with our 6-core and 8-core setups. These dips aren't that big of a deal, especially if you own a variable refresh rate display.

When moving below six cores, sub-60FPS dips become more common, with our baseline dual-core, quad-thread setup dipping below 30. The Total War series is now a title for PC gamers that have access to six cores or more on the high-end, though this isn't that big of a deal, as capable 6-core processors are available for around £150 these days, especially on the AMD-side.

Creative Assembly has done a great job improving the multi-threading capabilities of Total War's Warscape engine, though PC gamers will still need powerful systems to run this game at high framerates, especially when unit sizes are made larger. Three Kingdoms is a game that makes a case for processors like the Intel i9-9900K, as both high levels of single-threaded and multi-threaded performance are beneficial within this title. 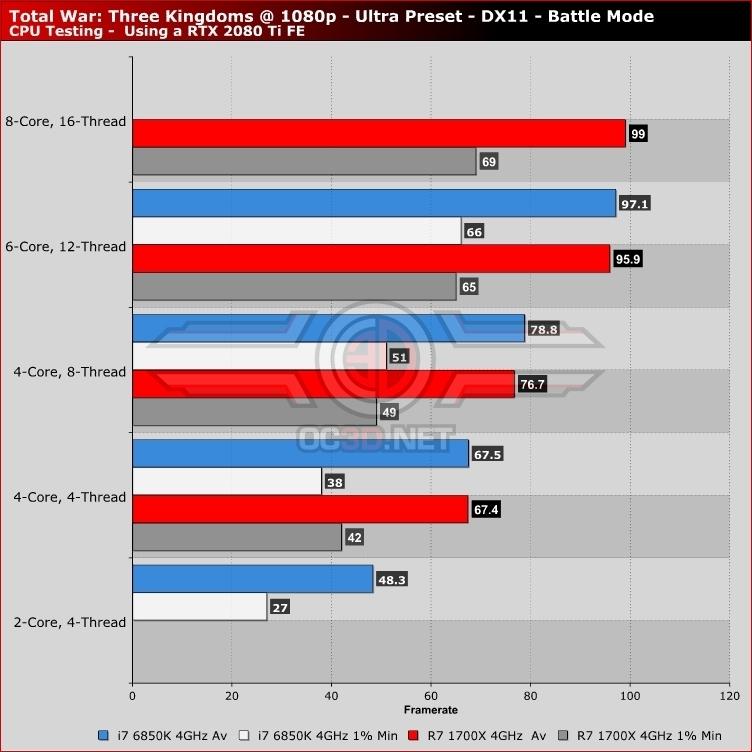 Total War's Campaign mode can be very CPU heavy, with between turn situations resulting in framerate dips to the mid-teens. This isn't a big deal, as these scenes are non-interactive, making general campaign movement and other details the most important factor to note.

Again, Total War: Three Kingdoms benefits from multi-threading, but at its core, the game is single-thread limited, as evidenced by Three Kingdoms' minimum framerates. Yes, performance gets better at higher thread counts, but it's clear that there is one thread that's holding things back. Framerates can be increased by lowering game settings or by investing in a processor with more single-threaded performance.

High framerates in campaign mode will make the game more visually appealing and make map navigation feel smoother, but in general lower levels of game performance are permissible here. In the campaign, players will mostly click and hit hotkeys, both of which aren't timing sensitive. 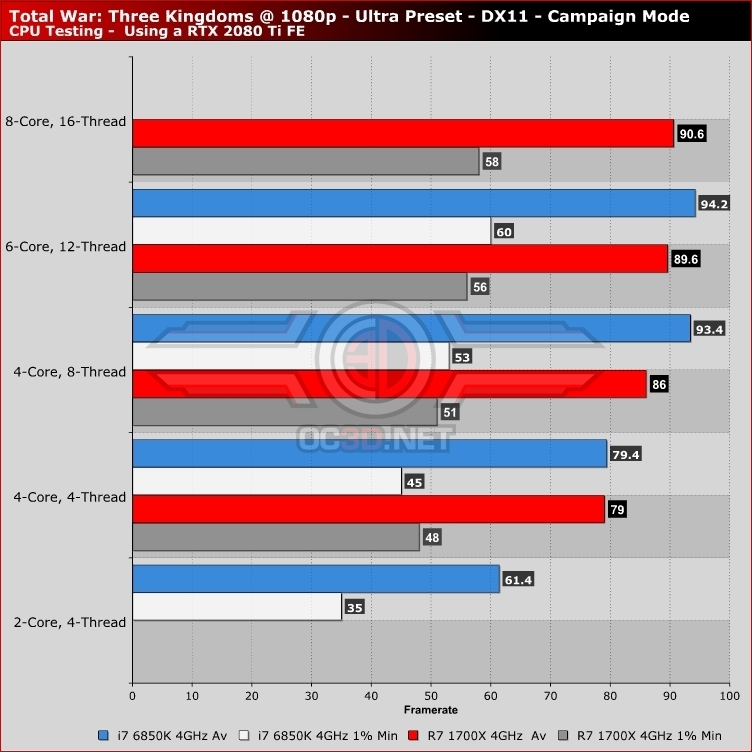