Settings and Options - Resolution Scale and what's beyond Ultra

Settings and Options - Resolution Scale and what's beyond Ultra

In many ways, Three Kingdoms is much like the Total War: Warhammer series of games, at least in terms of graphics tech. Upon loading the game, we are greeted with four basic quality options, Low, Medium, High and Ultra, alongside options such as Resolution and Resolution Scale options as well as dedicated Gamma and Brightness sliders.

Resolution Scaling is a great feature in the Total War franchise which renders the game's UI at your chosen native resolution while allowing the game to run at a lower internal resolution for 3D elements. This means that a 4K resolution can be used for Three Kingdoms' UI while a lower resolution buffer is used to render the title's 3D graphics, which is great for PC users who don't own an ultra-high-end system. These options can also be incredibly useful to laptop users, especially those who lack discrete graphics solutions.

Moving on, we find ourselves a larger list of advanced graphical options, which includes Three Kingdom's newly added TAA option, which has never been included in a Total War game before. This option hopes to address the series' aliasing issues, without relying on performance heavy solutions like TAA. 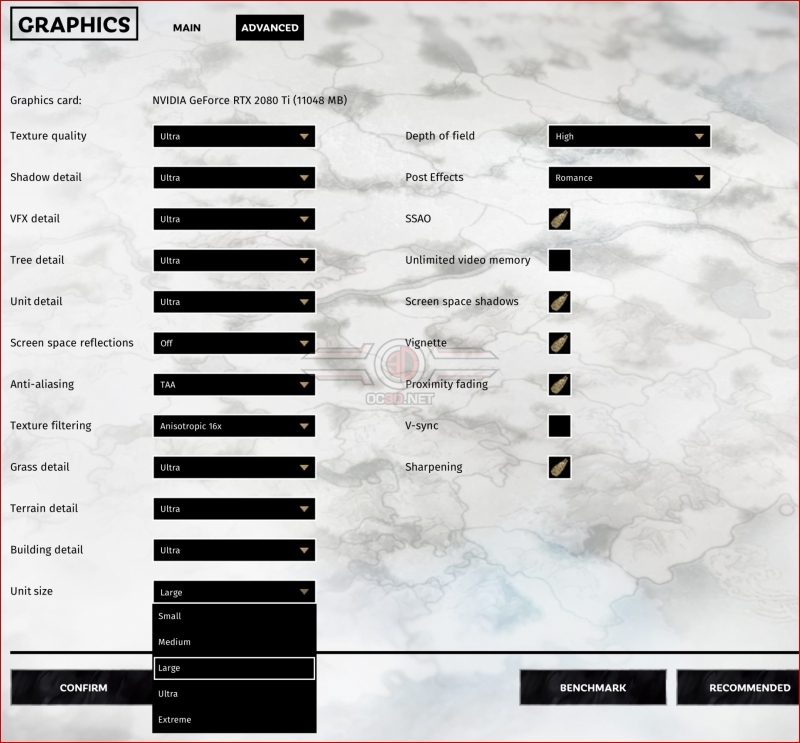 Below are the graphical settings that each of Three Kingdoms' presets target, though it is worth noting that several options move beyond Creative Assembly's Ultra preset, with Unit Size settings having two options that are larger than large. Screen Space Reflections are also disabled within each preset.

Total War: Three Kingdoms is a demanding game, but at least Creative Assembly has included these options for those who want to stress test their high-end systems or better utilise the performance levels that are offered by future generations of CPUs and graphics cards.

Screen Space Reflections and Ultra and Extreme Unit Size settings are not activated in any of Total War: Three Kingdom's default presets. That said, these options are extremely demanding, and should only be considered on extremely high-end systems.