In our testing, it is clear that Total War: Thrones of Britannia is primarily CPU limited, making steady 60FPS framerates almost impossible when using some of the game's highest presets.

While having to turn down some of the game's graphical settings isn't a major issue, it is hard to consider the Multi-threading support in this Total War iteration as anything other than sub-par. While adding more threads to the mix is improving things somewhat, our testing indicated that both in-game battles and the campaign map are both primarily single thread limited.

This suggests that Total War: Thrones of Britannia run best on CPUs with higher single-core clock speeds, leaving us somewhat disappointed in our 4GHz processors from AMD and Nvidia. Even so, it is hard not to be disappointed that Creative Assembly hasn't worked harder to multi-thread more of the game.
This performance deficit can be addressed with lower graphical settings, especially if unit sizes are decreased in real-time battles, though it would have been nice to see a little more effort put into multi-threading this engine, especially after considering how well Total War: Warhammer can achieve similar feats.

When comparing our Broadwell-E i7 6850K and our 1st Generation Ryzen 7 1700X, we can see that Thrones of Britannia prefers Intel cores, though this does make sense given the game's reliance on an older pre-Ryzen game engine. Total War: Warhammer received a Ryzen patched upon the release of AMD's new CPU series, though it remains unclear of the same care and attention has gone into Thrones of Britannia.

At its core Thrones of Britannia is a 32-bit application, using a modified version of Total War's Attila engine. Some of Total War Attila's issues could be due to Thrones of Britannia's 32-bit nature, though the game should be able to access more memory as the engine itself is "Large Address Aware", as detailed by Creative Assembly. 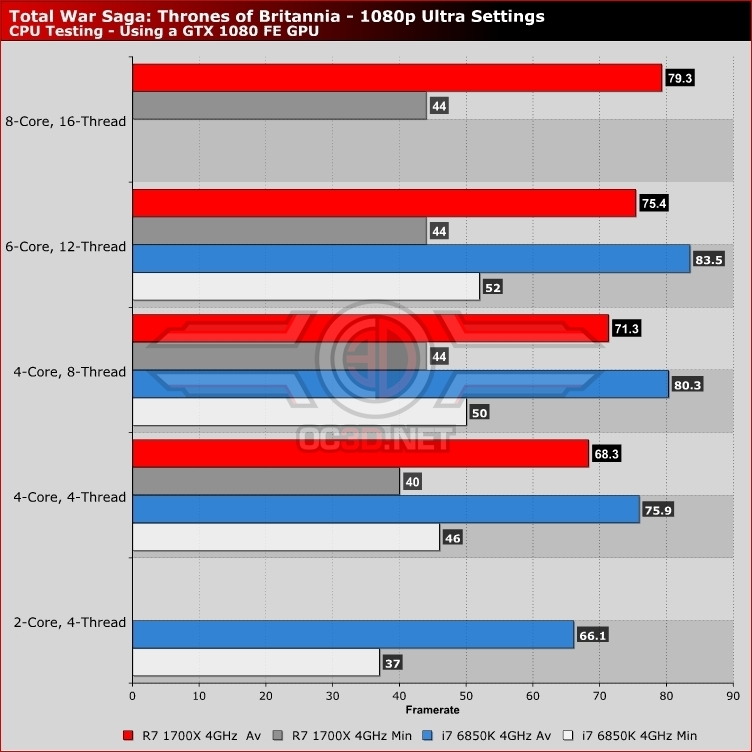 Changing unit sizes is the easiest way to impact CPU performance in a Total War game, reducing the number of individual units that need to be simulated at any given time.

Using the in-game benchmark we were able to achieve a performance boost of 15% in minimum framerate when reducing the unit size from Large to Medium at Ultra settings, allowing CPU more resources to be dedicated to offering higher framerate gameplay. The increase in performance in this quad-core/quad-thread processor is similar to the same boost that can be achieved when using our Ryzen 7 1700X with all of its cores and threads unlocked, making this setting change just as impactful as adding four extra cores and 12 new threads to the system.

Similar performance increase occurs when this setting is changed on both out Intel and AMD-based systems at all core counts. Sadly this setting has no impact on the game's campaign mode, which means that other settings need to be adjusted to impact CPU performance. 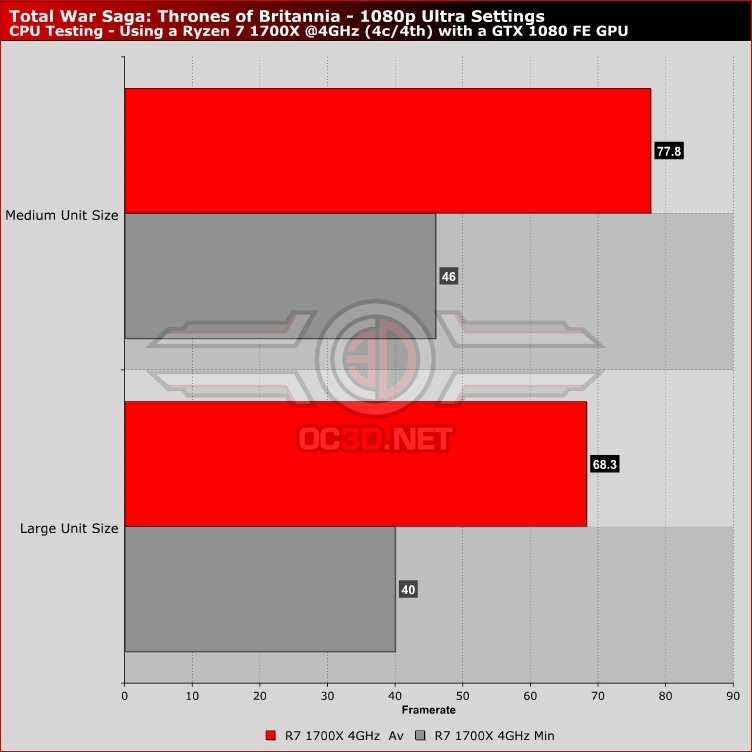 NeverBackDown
I think you were being slightly too harsh about the multi threading support. I mean we all know the Attila Engine was awful and expecting to much more certainly should have been out of the equation. I don't think comparing it to the newer TW3 Engine used in Warhammer is practical considering those were fully fleshed out titles rather than a spin off.

But all things considered the engine is MUCH better than the Attila one. That said I do still agree that 32bit and lack of Multi threading improvements were horrible ideas and should have at least had more work gone into it. But it's a spin off. So I guess as long as it was better than before they thought it was okay.


I also agree on having separate settings for Campaign and Battles. They are so VASTLY different in what they really stress on the system that it makes little sense to switch settings all the time. Which is something people with lower end hardware have to do.Quote

WYP
Quote:
I think it is accurate to say that my harshness could stem from my love for the series, as a sincerely hope that Creative Assembly can take some of my criticisms to heart.

Yeah, I think the best thing that they can do is split campaign and battle settings, though obviously some things like unit sizes will be shared between both modes.

As I have said in the review, I like the game, I look forward to playing more, but the focus here is on performance and when there is a major shortcoming it needs to be discussed in detail.

NeverBackDown
I understand and I am in the same boat as you.

I won't be getting it though. I just don't think it's worth it. We already had a ton of other Viking themed gameplay in Attila and playing more of it for the sake of different features doesn't interest me for the money.

I don't have much hope for 3K myself. China is boring to me and with how Britannia and Warhammer 2 have gone I am not excited.Quote
Reply