When today's PS4 and Xbox One consoles launched, the days of 2GB graphics cards were numbered. Developers gained had 8GB of combined memory to utilise, which meant that even 1080p games would start using significantly more VRAM. Today, it is not uncommon to find new releases using around 4GB of VRAM at 1080p, making life difficult for the masses who owned older 2GB graphics cards.

If you looked at our basic 1080p performance charts, you could see that our ageing GTX 960 and R9 380 graphics cards were pushed past their limits, but we knew that we could get this game to run, given The Division 2#s PC system requirements (See Page 2).

For starters, we moved back to DirectX 11, as the older API tends to run better in VRAM constrained situations, likely due to the increased control that the graphics driver has over VRAM allocation. This change alone resulted in a considerable performance boost, but is nowhere near enough to get a stable 30+ FPS framerate.

Moving down to The Division 2's Medium preset resulted in 30+ FPS performance. With these GPUs, we recommend locking the game to 30FPS with a mixture of Medium and high settings for the more stable gaming experience. Using a gamepad will mitigate the impact of the low framerate and make the game feel smoother, at least when compared to keyboard/mouse controls. 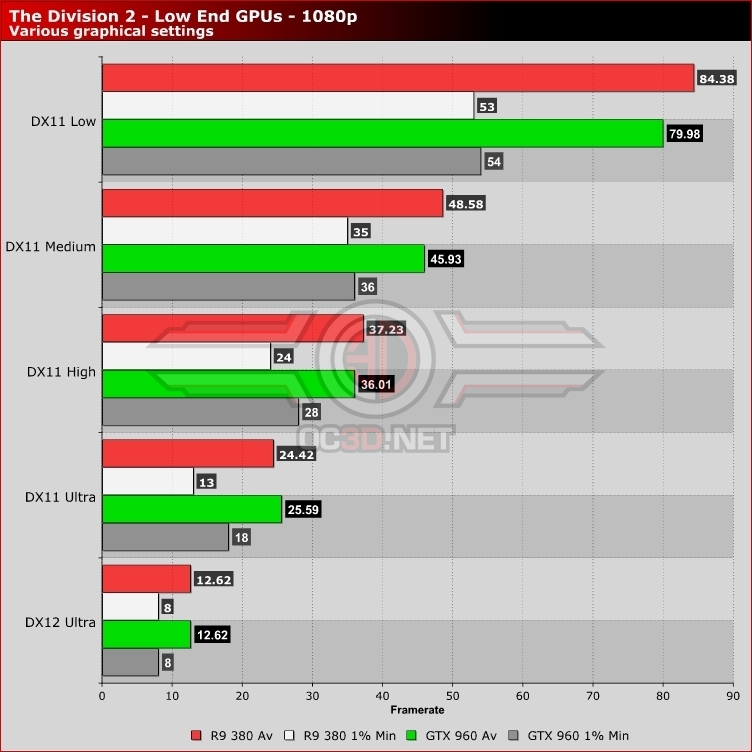