Moving between Shadow of the Tomb Raider's Low and Medium settings, the easiest change to spot is the game's lower resolution textures, which manifest in the form of lower resolution walls, flooring and support pillars around the bar, a change that is present on most small details.

The second most notable difference is the game's loss of Ambient Occlusion, which removes of indirect shadows around a number of in-game items, a change that is visible around the bottles and food on the table and around areas like the jukebox.

Shadow of the Tomb Raider's Level of detail settings also see a significant drop, a change that is clearly visible on the distant buildings, creating a lot of noticable pop-in. This is most apparent when you look at the rooftop of the building on the right, which becomes completely flat. 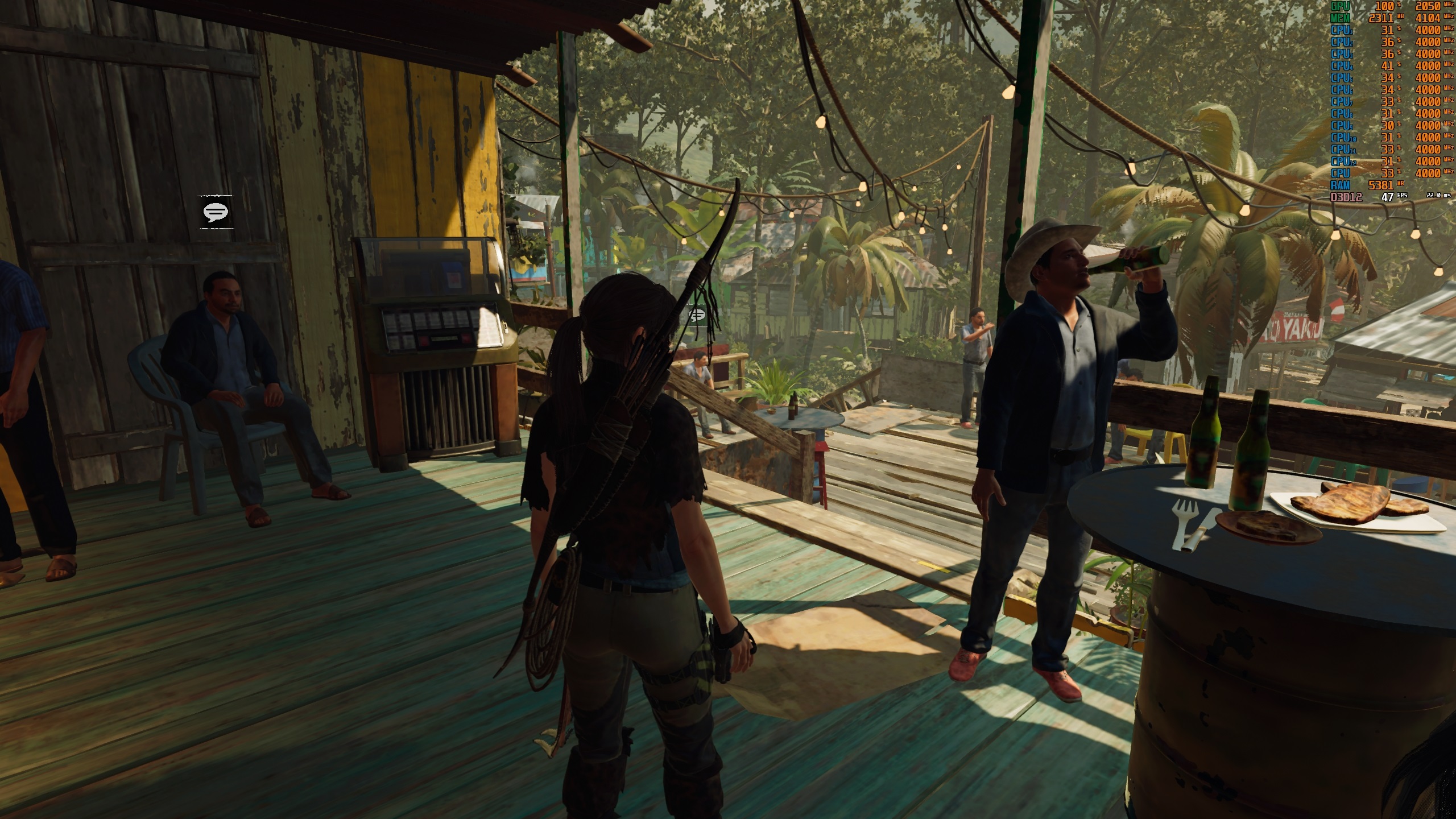 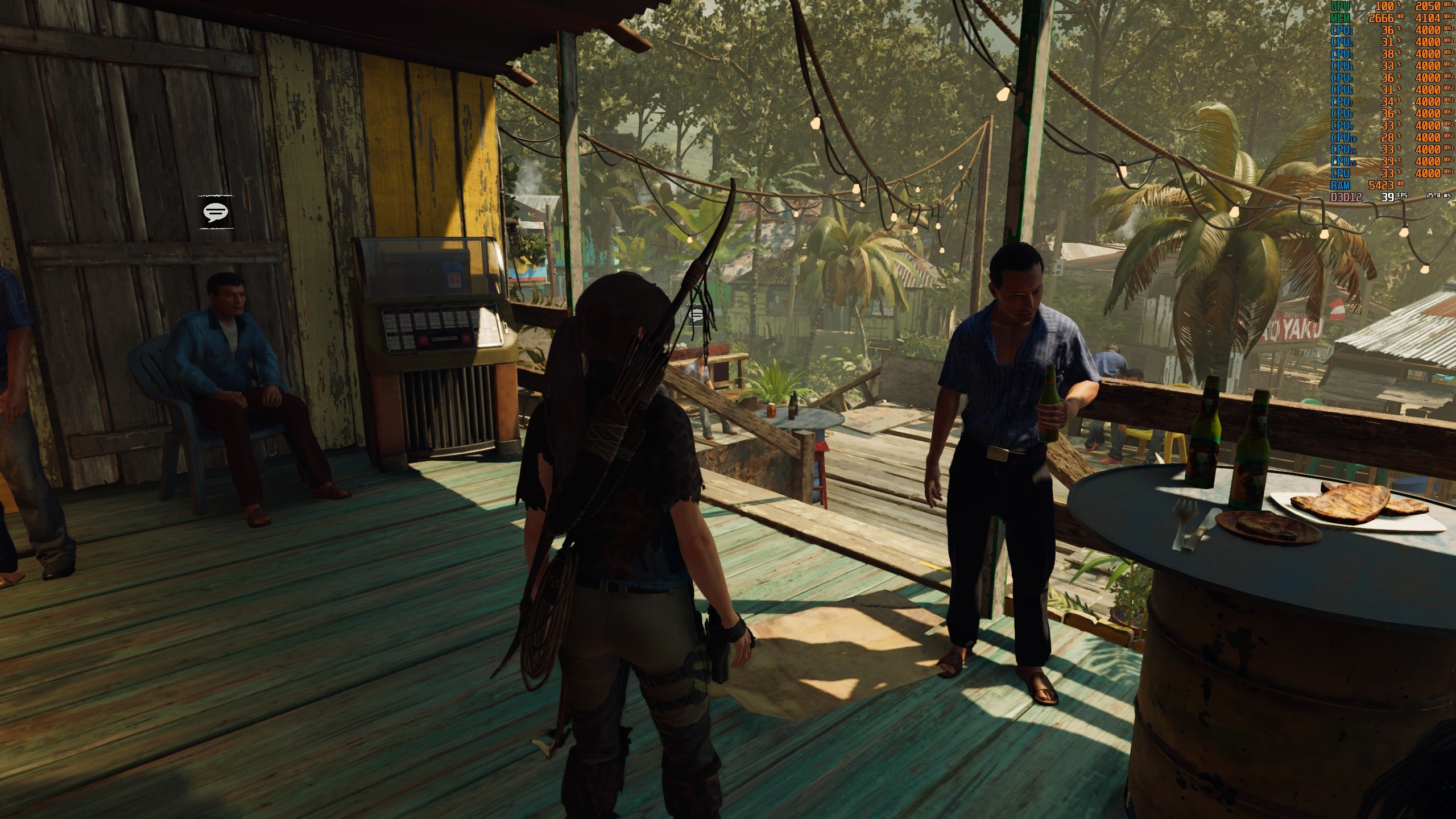 For the most part, Medium and High look identical, offering the same level of detail settings while also including screen space reflections, motion blur and the game's highest PureHair settings.

Strangely, the shot below appears to have sharper shadows when using the game's medium settings, s high appears to add an indiscriminate blur effect to the game to reduce shadow aliasing. In some ways, high is more realistic, but some players will prefer the sharper appearance of shadows at the game's lower setting.

Aside from this, the most notable change within the game is texture Quality, a difference which is especially noticeable when looking at the walls and pillars around the bar. The most significant change between Medium and High settings is the amount of VRAM that is used by the game, jumping from 2666MB at medium to 4154MB in this scene. 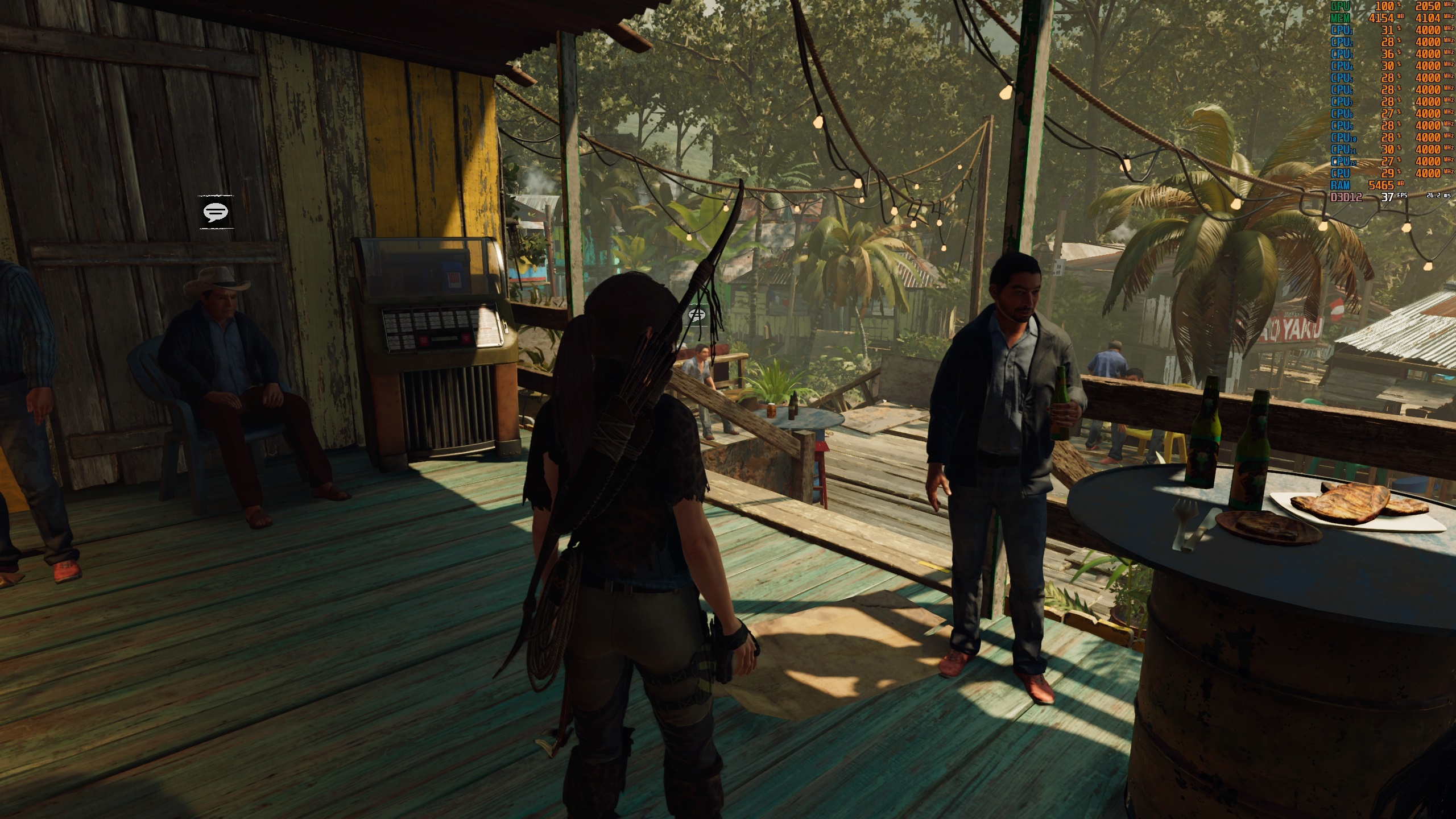 When moving between Medium and High, there are a lot of subtle graphical changes aside from the obvious increase in the level of detail and the inclusion of sharper shadows.

Level of detail increases can not only be seen in distant geometry, but also in the bottles at the nearby table, which gain high-resolution labels and a rounder appearance.

We can also see a huge contrast between the game's BTAO and HBAO+ Options, with BTAO providing more realistic shading around the jukebox while BTAO creates shade in some areas that are not covered by HBAO+, like under the chair at the left of the screenshots below.

Shadow resolution also sees a significant increase when using Shadow of the Tomb Raider's highest preset, though the introduction of Screen Space Contact shadows hides a lot of this extra detail. Screen Space Contact Shadows blur shadows realistically as they move further away from their source, which covers up their increased sharpness when chose to their casting objects. 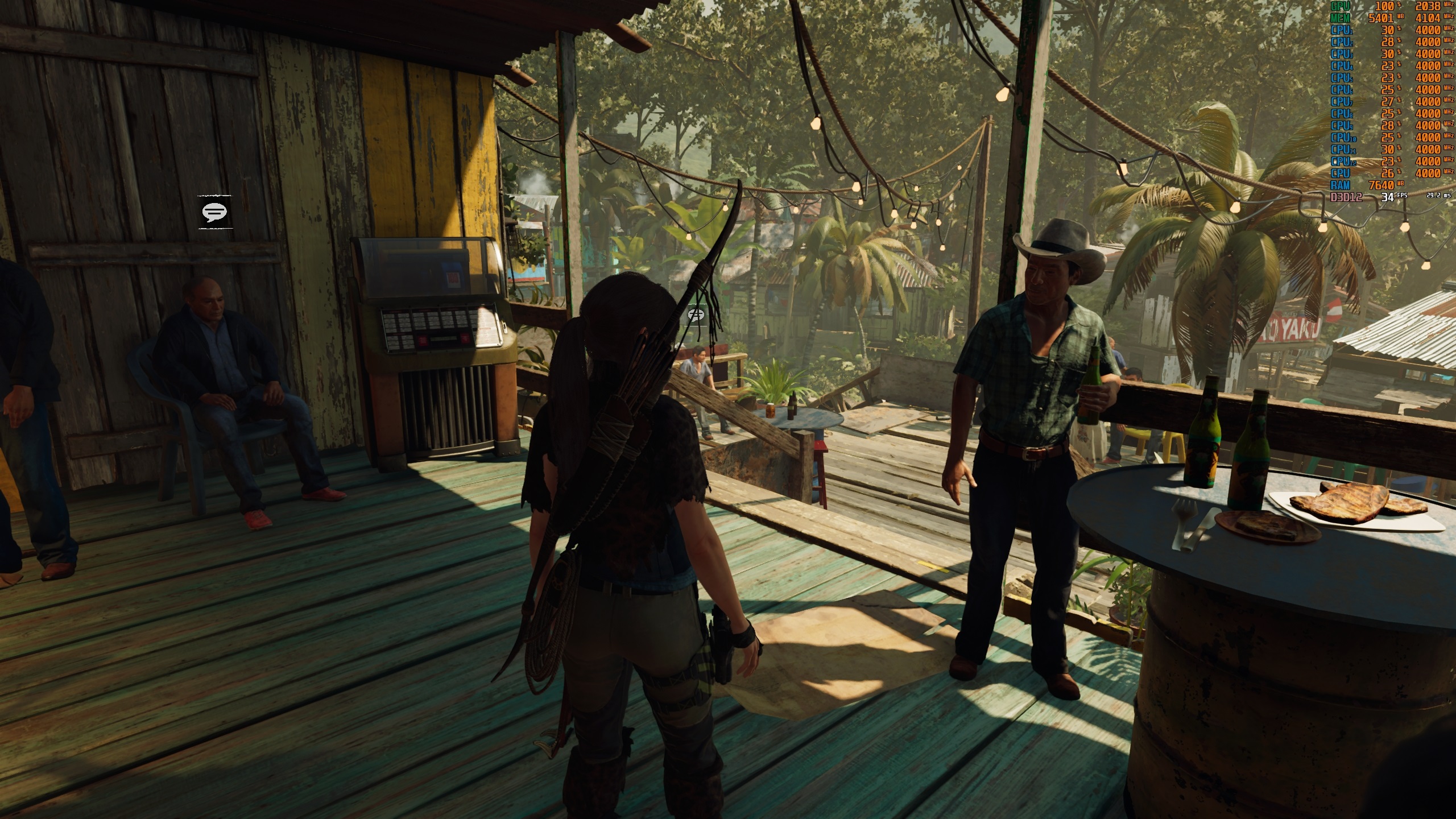 Moving beyond Shadow of the Tomb Raider's Highest Presets presents users with two noticeable changes, the first of which is sharper shadows in specific areas as well as an increased blur in shadows as they move further away from its source.

Another notable area of improvement is in distant detail, as we can see more objects drawn in at a distance, which will reduce noticeable pop-in. This change is most apparent in distant buildings and structures. 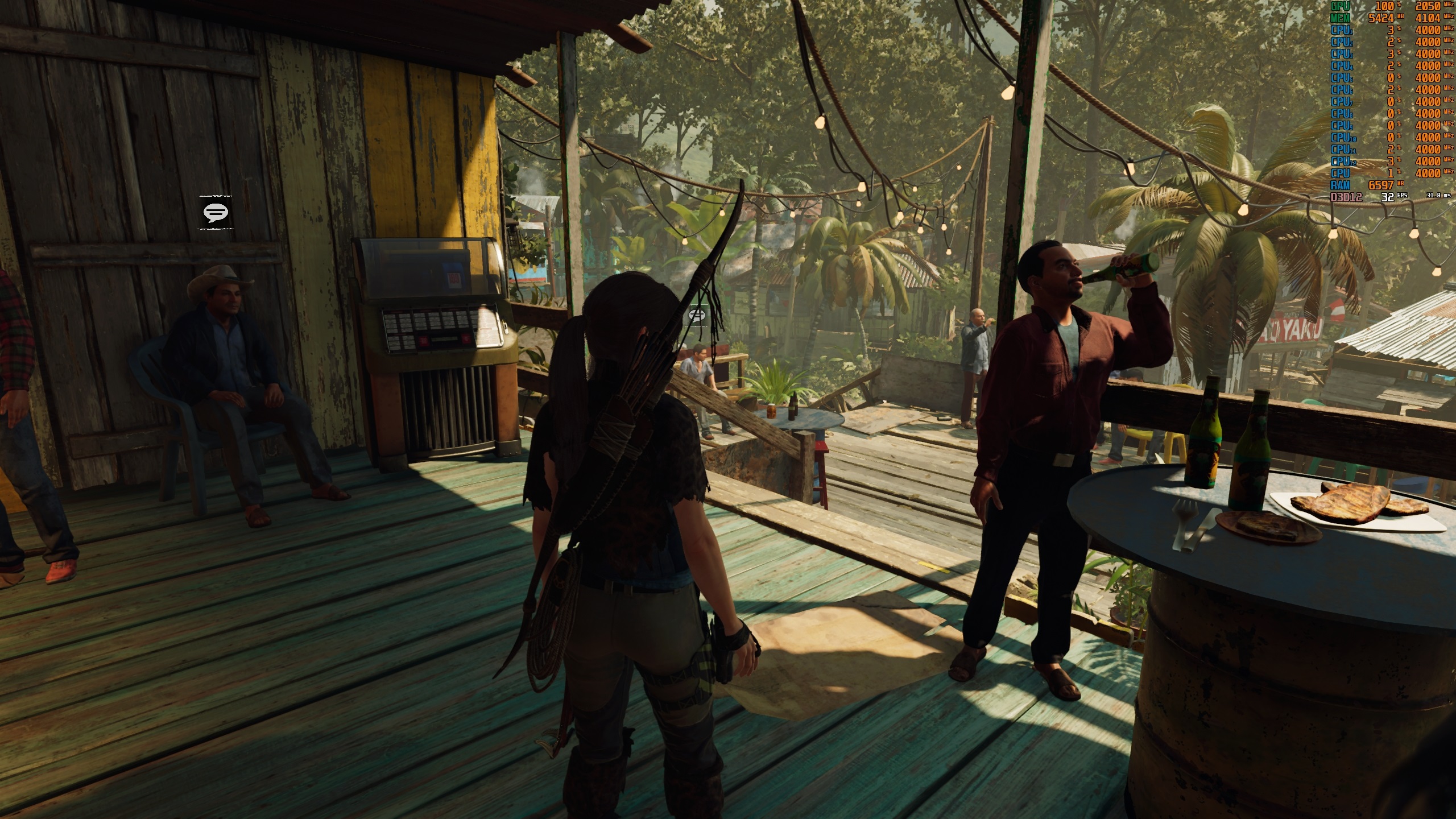