Rise of the Tomb Raider update - Has AMD Performance Ryzen?

Anyone who is well acquainted with Rise of the Tomb Raider will know that the minimum framerate results for this benchmark can be unreliable, so we will be sticking to the game's average framerate numbers, which see a healthy increase at both 1080p and 1440p. 4K results remain within a 1% margin of error, confirming that there are no GPU related changes in this patch.

With our Ryzen 7 1700X at 4GHz, we see a 9.7% performance improvement, which is huge considering the fact that this is with an overclocked 8-core with 3200MHz memory. At the higher resolution of 1440p, where the game would be a lot less CPU limited, there is still a 3.9% performance gain, showcasing that even high-resolution gamers can benefit from CPU performance optimisations.

Larger performance gains could be possible in situations where the game is more CPU limited, like when a lower clocked CPU is used or when lower speed memory is utilised. The Ryzen CPU we have used here is at 4GHz and with 3200MHz memory, which is pretty much a best case scenario for Ryzen, making these performance gains the very least that Ryzen users should expect from Rise of the Tomb Raider.

- Update - We have now updated our testing with stock performance results for our Ryzen 7 1700X, showing an even larger (14%) increase in framerate and post patch results that closely match the results from the same system in an overclocked state.

This proves that the game is now GPU limited and also that the performance gain from this patch can be much larger depending on how CPU limited your system is.

We can see below that our stock Ryzen 7 1700X now performs better at stock than the same system did while overclocked before this patch, which is an impressive change in itself. 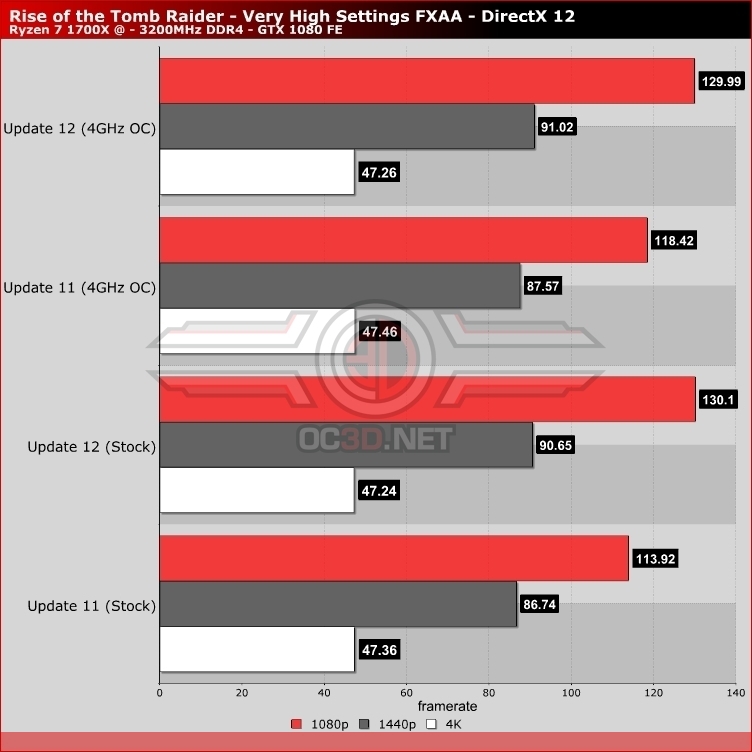 WYP
Quote:
I'm rerunning the tests with the CPU at stock to see how the performance gap changes, will post the results later.Quote

NeverBackDown
Quote:
Is there anyway to shut off cores in the BIOS to simulate Ryzen 5?Quote

WYP
Quote:
There are options to do that, but they are very temperamental and time-consuming to get working right. Not enough time to get it done during Computex.Quote

AngryGoldfish
Great article. Thanks for the putting the work in.Quote
Reply