Radeon Software Integer Scaling Tested - This is how it's done!

AMD puts its competitors to shame with widespread hardware support

Radeon Software Integer Scaling Tested - This is how it's done!

Integer Scaling isn't new within the world of GPU drivers. Nvidia has an Integer Scaling beta in its latest drivers and Intel also has support for Integer Scaling in its newest GPUs. Sadly, these implementations are locked behind their latest hardware, forcing customers to buy new graphics cards for a feature that primarily benefits classic PC games. With their implementation of Integer Scaling, AMD's Radeon Software team has decided to open things up to both old and new customers, putting its competitors to shame.

That's right, AMD's Radeon Software Adrenalin 2020 Edition driver ships with support for Integer Scaling, supporting all GCN dedicated graphics cards, and Ryzen 2000 and new APUs. This means that users of GPUs as old as AMD's HD 7970, which released in 2011, will be able to benefit from Integer Scaling, which is great news for longtime AMD fans. Software support for Integer Scaling will only be available in Windows 7 and Windows 10, with AMD skipping Windows 8/8.1 in favour of extended hardware support.

Where Intel and Nvidia lock its features behind their latest and greatest graphics hardware, AMD delivers it to almost its entire userbase. With this move, AMD's Radeon Software team is showing its competitors how it's done. 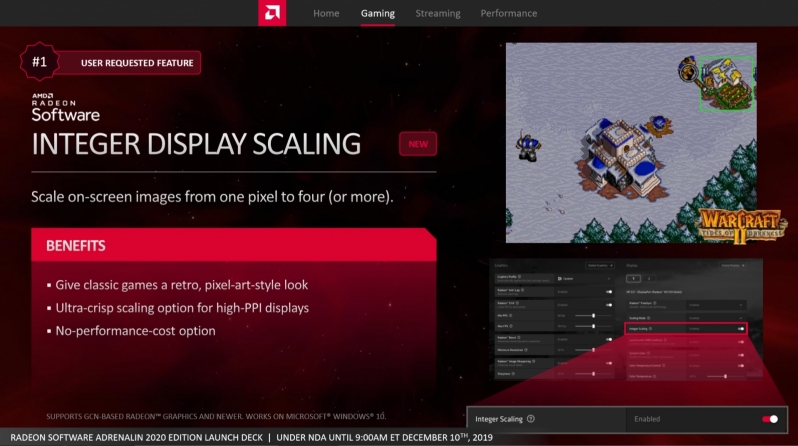 What is Integer Scaling?

The simple idea behind Integer Scaling is to preserve the look of low-resolution images by turning one classic pixel into a grid of 2x2, 3x3, 4x4, etc pixels to deliver a sharp look on modern screens without any added blur. This is especially useful when playing older pixel-art games on modern displays, such as Warcraft, Command and Conquer and Fallout Classic.

Even higher resolutions can benefit from Integer Scaling, with 1080p being able to be Integer Scaled to 4K with a 4x4 integer upscale. This could allow lower-end GPUs to utilise 4K screens for productivity purposes, and game at an integer scaled 1080p to maintain sharp pixels and higher framerates. This makes Integer Scaling a great option for integrated graphics users and discrete graphics users alike. 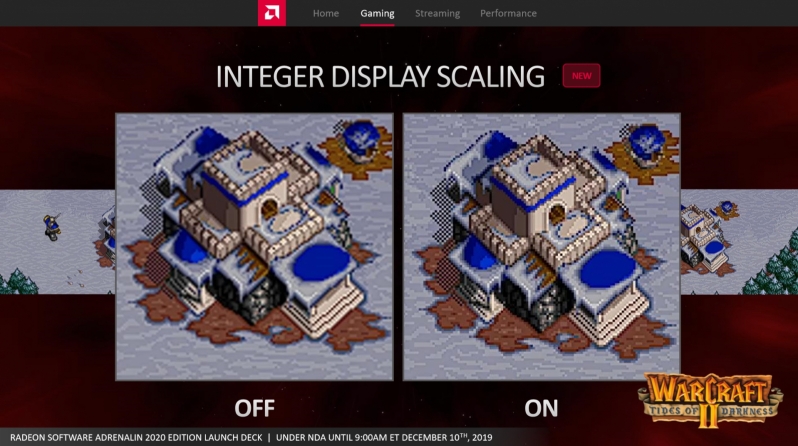 When testing out AMD's implementation of Integer Scaling, we tried out a number of gaming titles, from the Westwood's Command and Conquer series to Grand Theft Auto 1 & 2 and Fallout Classic.

The one downside of Integer Scaling is that it does not guarantee that the full size of your screen will be utilised. While traditional scaling methods will scale a game to your monitor's full horizontal or vertical resolution, Integer scaling scales up images to the largest grid size it can. For example, a 480p image would scale to a 4x4 Integer scale to create a 1920p image and 240 blank pixels on the horizontal axis. This is the cost of perfectly scaled pixels.

In our screenshots below, a section of a screenshot from a 4K display is shown. These screenshots are cropped to 800x450 to display on our website and were captured using Elgato's 4K60 Pro MK.2 capture card (review here).

As you can see in the image below, our Integer Scaled image features sharper pixels and easier to read text than the image with standard image upscaling. This makes Command and Conquer: Red Alert 2 - Yuri's Revenge a lot easier to play on modern displays. 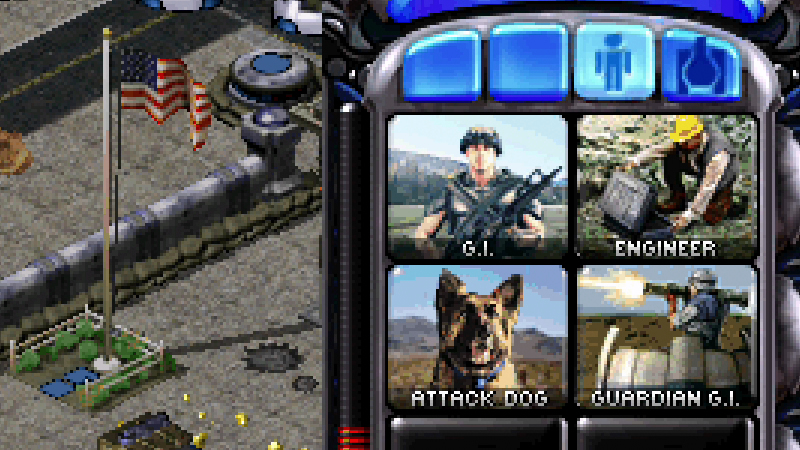 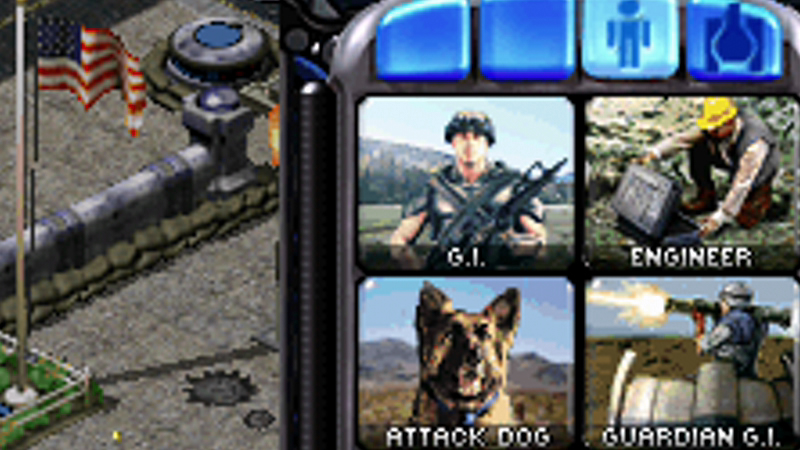 Below we can also see that Command and Conquer: Tiberium Sun also looks much better with Integer Scaling, making the game's pixel art a lot easier to look at. Without Integer scaling, the game's Titan Walkers blend into the terrain, making them harder to spot.

When it comes to the Command and Conquer series, Integer Scaling is a godsend. 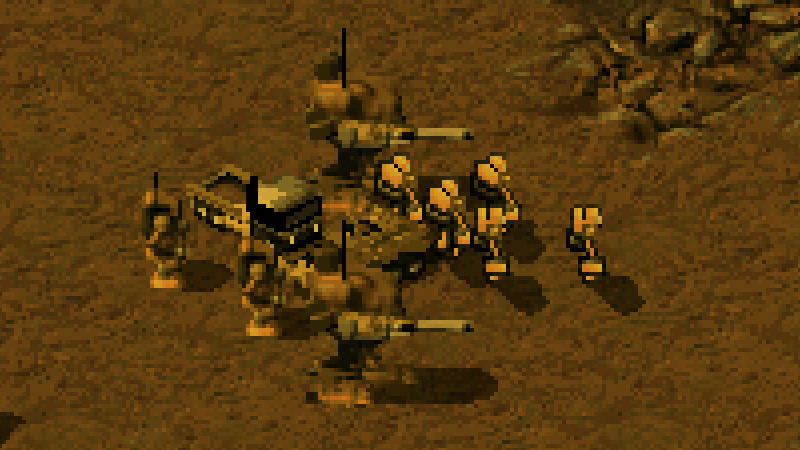 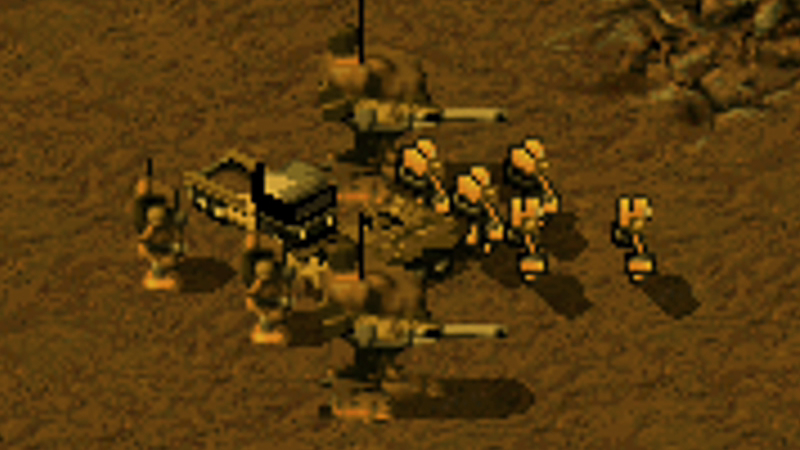 tgrech
My HD7870XT might only have a few weeks left in it(Depending on how those 5600 leaks go) but this is a welcome addition all the same, finally these older PC games will no longer look like the 360p YouTube quality setting.Quote

ET3D
I find the scaled up images with no integer scaling to be superior, and since that's probably how the game will actually look on the screen, I probably won't go for integer scaling if I play old games. But I'm sure that big pixel fans, of which there are many, will enjoy the feature.Quote

WYP
Quote:
It ultimately depends on whether or not you like the extra blur. I prefer the sharper pixels, The blending can help some pixel art, but I'd get sick of blurry writing very quickly.Quote

DAOWAce
Crisp pixels, just as they were designed to be viewed on CRTs.

Though, scale things up too big and it starts to get a bit of a problem..Quote
Reply