In Project Cars 2, the weather has a huge impact on the game's performance. Effects like rain, snow and fox will all cause additional particles to be drawn in, effect visibility and add additional elements into the scene that will affect both the game's visuals and how vehicles traverse each track.

With Project Cars 2 featuring such a large number of in-game weather types, we decided early on that testing all of them was simply not possible due to time constraints, so we decided to test the five most extreme weather conditions in the game which range from rain and thunder to blizzard levels of snow and fog.

In this test, we played the game at maximum settings on the Nürburgring with a total of 30 vehicles on the track, playing the opening section of the race where the maximum number of vehicles are present within the scene at once.

For Project Cars 2 we decided to make a Thunderstorm weather condition as part of our benchmarking run, giving a worst-case scenario for game performance. This means that the game will perform much better than this in standard gameplay, provided the users are playing/driving in less stressful weather conditions. 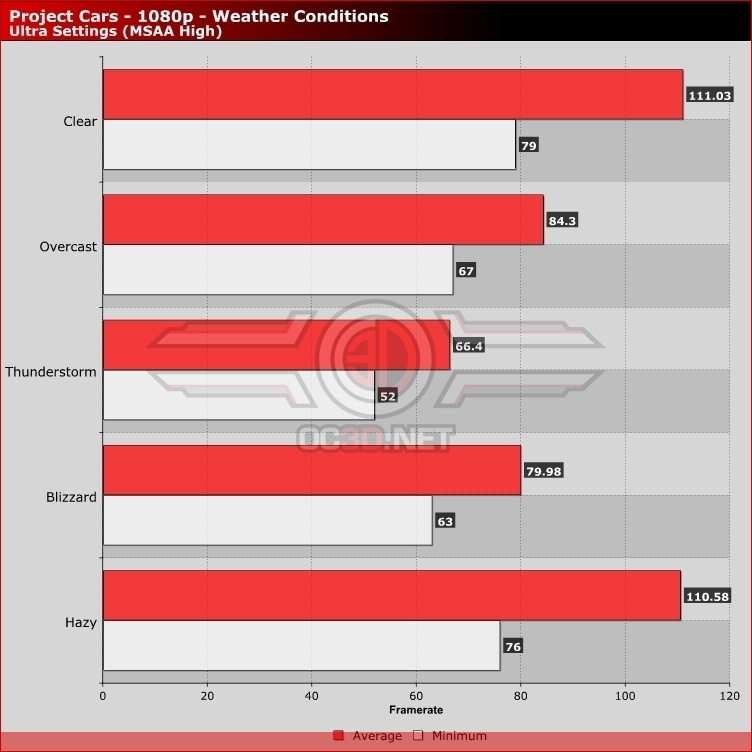 Bagpuss
Surprised at how demanding the game is given the steep visual downgrade in the lighting and rain effects compared to the first game.

kitomano
Hmm, I have no problems running it on my PC

WYP
Quote:
Quote:
This is one of the huge challenges with this kind of testing. There will always be a scenario in a game that will be more demanding than others, but in this case, the performance loss is pretty extreme.

Favorable weather conditions can cause minimum framerates to increase by as much as 45%.

In all the game is extremely scalable and is very easy to run in most situations, though it can really make your PC cry if using unfavourable racing conditions at the game's highest settings.

I kinda wish that I had Bernard's watch or something similar so that this kind of testing could be done within a more reasonable timeframe.Quote
Reply