Graphical Settings and controls - What is Variable Resolution Rendering/Resolution Scaling?

Monster Hunter: World is a game where its console origins are apparent, at least when looking a little below the surface. For starters, the game only supports 16:9 resolutions, presenting users with different aspect ratios a "black-bar" experience to showcase the game as normal. Mods are in development that should address this issue, though for now Ultra-wide monitor users best get used to having a console-like 16:9 experience.

Thankfully, other symptoms of "consolitis" are not present within the PC version of Monster Hunter: World, with the game offering users an unlocked framerate if they desire it. Framerate locks fo 30 or 60 are also available, as well as standard V-Sync settings and a selection of resolution scaling options in the title's "Advanced Graphics Settings" menu.

By default, Monster Hunter: World has four graphical presets, offering Low, Medium, High and Highest graphical options, though we would advise that players adjust their graphical settings manually, as this will allow players to optimise the game's settings better. The performance and graphical changes between High and Highest are significant, making us wonder why there isn't an intermediate "Very High" settings to offer players a little more granularity. 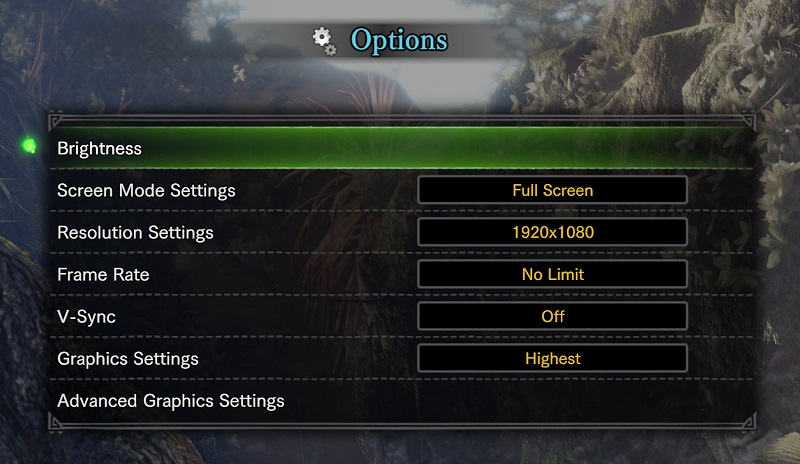 Resolution Scaling and Variable Resolution Rendering - What is it?

One of Monster Hunter: World's most noteworthy graphical options is its "Resolution Scaling" setting, which allows players to lower the internal resolution of the title.

Monser Hunter: World's Variable options are most similar to the variable resolution modes that are used in the game's console versions, with Prioritise Framerate (PF) allowing for large changes in resolution to maintain a higher framerate while Prioritise Resolution (PR) will only change the game's internal resolution slightly to mitigate some performance dips.

We would like to see Capcom update Monster Hunter: World to offer gamers a percentage option alongside their Low, Mid and High presets, as this will more accurately inform users about the impact of the feature. How much does the game's resolution drop when moving from high to mid? Gamer's shouldn't have to resort to pixel-counting techniques to figure this out.

WHen playing Monster Hunter: World on PC, I found few issues when playing the title on keyboard/mouse, though it is worth noting that some of the game's radial menus are a pain to use without a gamepad. Accessing certain items mid-fight can be a challenge, such as a whetstone for sword sharpening or an antidote to negate the effects of poisons. This delay can be distracting in the midst of battle, or deadly in the case of antidote drinking; such are the risks in an online game where combat doesn't pause in menus. 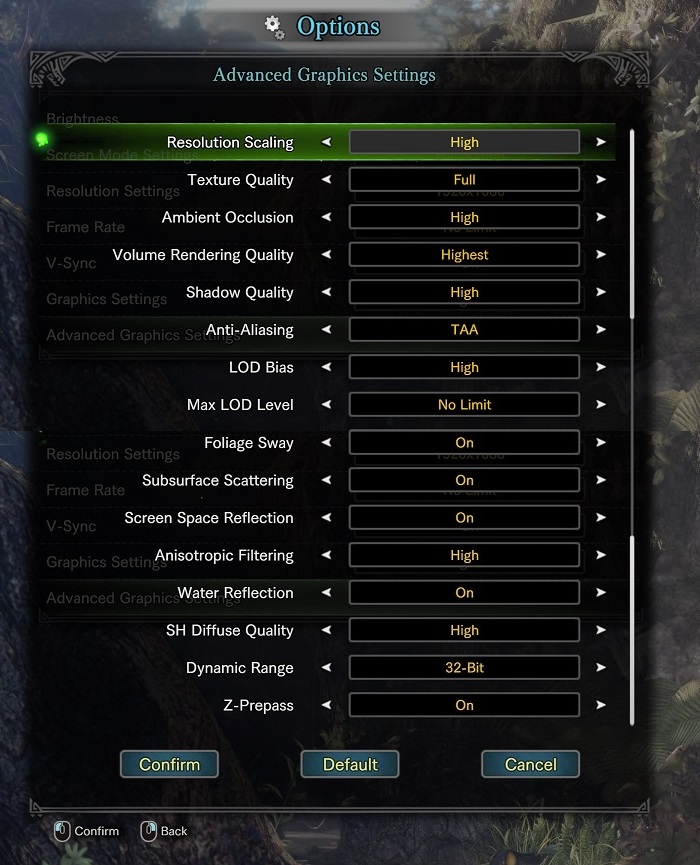 Below are Monster Hunter: World's "Advanced Graphical Settings", and what settings are used in the game's Low, Mid, High and Highest presets.

Right now we will tell you that Dynamic Range, Anisotropic Filtering and Z-Prepass have a negligible impact on Monster Hunter World's performance, allowing players to turn these settings to their max without fear of performance drops. We will look further into the game's other settings on page 5, which will tell you which of these settings have the largest performance impact and which settings you should turn off first.