Following the Xbox Series X/S release of Microsoft Flight Simulator, the PC version of the game received a major update, one that transforms how the game plays on the platform. Even now, Microsoft Flight Simulator remains a demanding game on PC, but this week's update makes significant strides by making the game's framerate more stable while making the game more accessible to PC users with lower-end processors.

Through this article, we will be exploring how Microsoft Flight Simulator's PC performance has improved, testing the game on both Radeon and Geforce powered PCs with our trusty Ryzen 9 3950X. 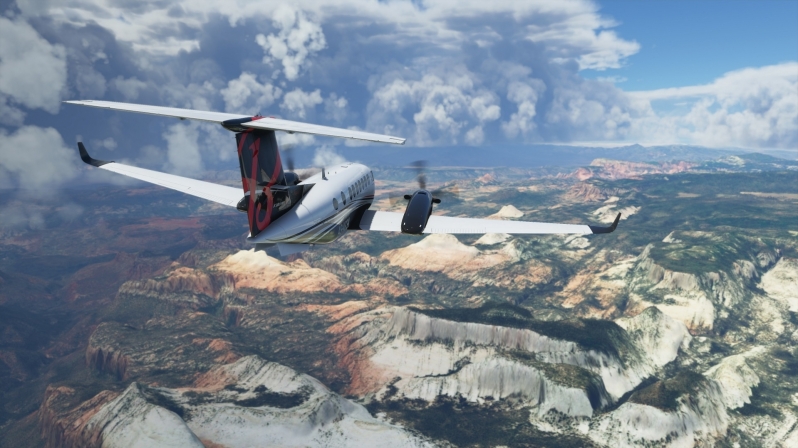 With Microsoft Flight Simulator's latest PC update, we will be using our new Games and Graphics Card test system, which is powered by AMD's Ryzen 9 3950X processor and PCIe 4.0 storage. More information about this system is available here, where we have detailed why we have moved to Ryzen for our GPU and games testing. CPU & Motherboard - AMD Ryzen 9 3950X and ASUS ROG Crosshair VII FormulaThere is a lot to consider when building a new games testing system. Will this system stand up to the test of time. Does this system contain the features that new games will require, and are we choosing the right CPU platform for the job? With the next generation of consoles coming with Zen 2 processors and support for PCIe 4.0 storage, it was logical to choose a Ryzen-based test platform. When we built this system, none of Intel's CPU offerings featured PCIe 4.0 support, and we could not build a new test system knowing that it will be outdated as soon as games start to utilise faster storage mediums. With ASUS' ROG X570 Crosshair VII Formula, we know that we have a motherboard that has capable VRMs to withstand the punishments that a hardware test system must face. With X570, we also know that we can upgrade to Zen 3/Ryzen 5000 should we ever need to.