With this in mind, our benchmarks include a take-off sequence from New York's Kennedy International Airport and an In-Flight sequence above Northern Ireland, which are designed to highlight the performance of both areas of the game.

We have endeavoured to make our benchmarking for this game as accurate and repeatable as possible, but understand that this game is dynamic, and that CPU benchmarks have more run-to-run variance than GPU-limited tests. Regardless, we have seen several trends emerge with Microsoft Flight Simulator.

For starters, across both our take-off and high altitude flight workloads, Flight Simulator won't benefit much from systems with more than eight threads. Even so, having eight cores did increase our minimum percentile framerates somewhat, even if average framerates remained similar.

Strangely, in our four-core, four-thread test, Microsoft Flight Simulator's performance nosedived. Our hypothesis is that this is due to inter-core/thread latency, as disabling SMT forces more inter-CCX communication and its associated latency penalties. These latencies matter, an significantly increase noticeable stuttering within our system. With this in mind, it is likely that older Ryzen (Zen & Zen+) systems could suffer for greater CPU-related performance issues due to larger inter-CCX and memory latencies.

In the future, we hope to find a way to simulate a quad-core setup with four threads within a single CCX on our Ryzen 9 3950X, so that we can properly test the performance impact of these latencies. 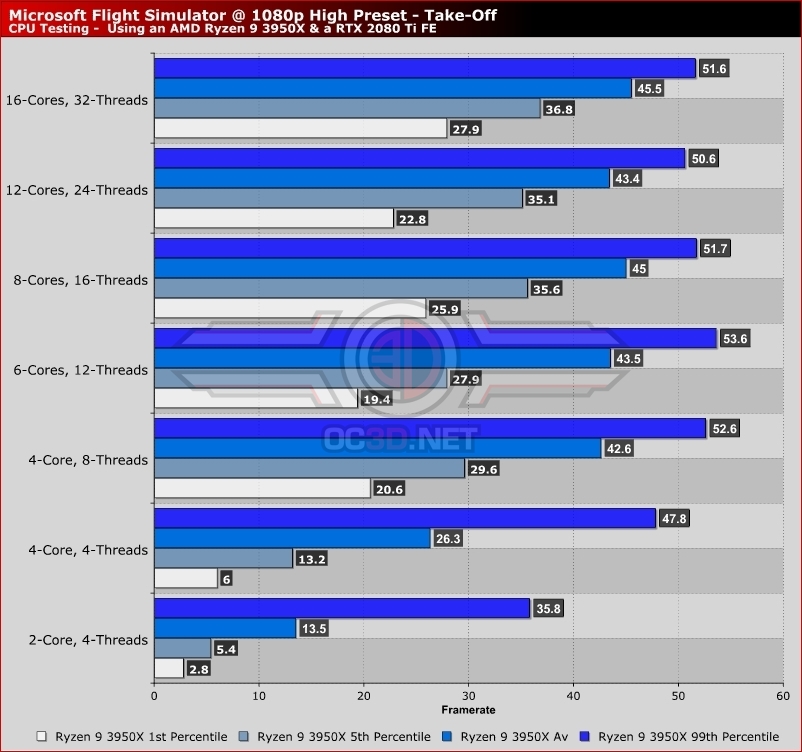 In-Flight - CPU-Limited, but much smoother

When flying at over 10,000 feet, Microsoft Flight Simulator remains CPU-limited at 1080p with our RTX 2080 Ti, though it can maintain 60+ FPS average framerates.

The highest performance levels appeared to be available on our 8-core and 6-ore setups, but this appeared to be due to higher average core clock speeds across those lower core counts. Even so, the difference only amounted to a few FPS.

With our quad-core, quad-thread setup, we experienced a much smaller performance drop when compared to our take-off testing. This is due to the lower impact of core-t-core latencies under this workload. Even so, enabling SMT does have its performance benefits.

Looking at our dual-core results, it is clear why Microsoft recommends quad-core systems, especially given their performance during take-off. 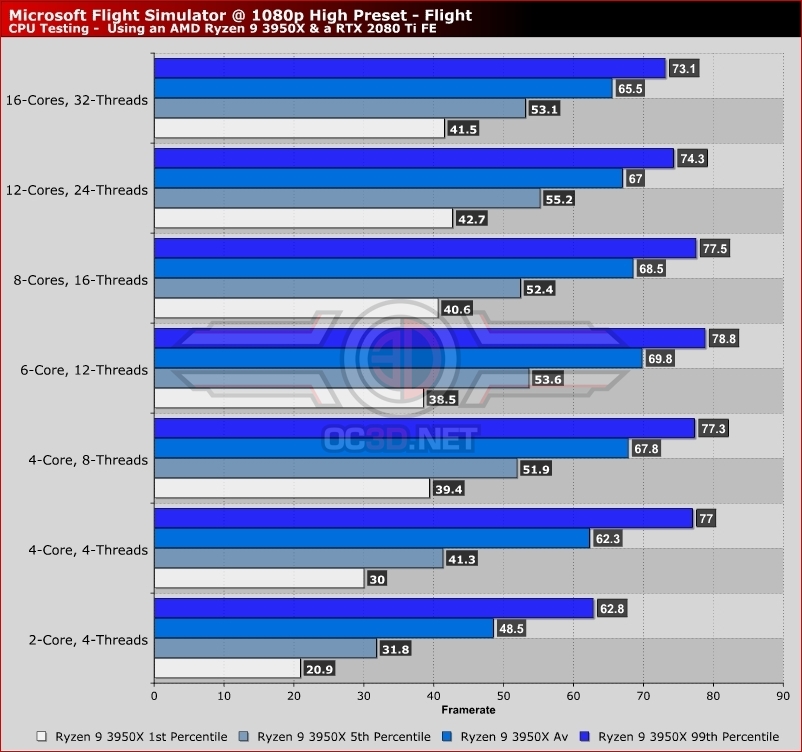