CPU Comparison - Intel VS AMD - How many cores does this Medieval RPG need?

CPU Comparison - Intel VS AMD - How many cores does this Medieval RPG need?

Kingdom Come: Deliverance requires a lot of CPU performance, particularly in built-up city areas like Rattay. It is clear why Warhorse has requested that gamers have four or more CPU cores to play this game.

We can see that increasing the number of cores available to the game will improve its framerate, with Kingdom Come preferring Intel slightly, though Ryzen does offer more than enough performance to run the game well.

Our testing was conducted while the player character runs through Rattay, maximising the amount of asset streaming and general system load that players will generally face within the game, so don't expect the framerates to tank this much in general gameplay, especially in the countryside or other areas with a low population of NPCs. 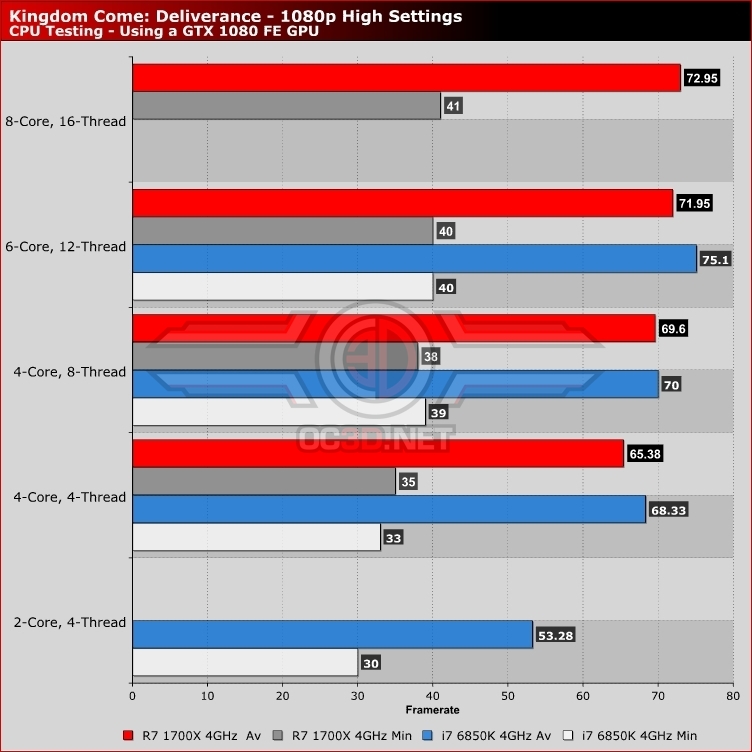 NeverBackDown
There is no 60FPS cap. You can remove Vsync and you can easily get above 60FPS.

Also this game isn't that bad to run for me. 1440p and a 1080 I am running just fine. There are some places where performance tanks and things do need to be addressed but thankfully that's not that often(like big battles or crowded streets).

I will say however that the texture streaming in this game is god awful. Got a mod that edits the settings and you can change how much memory this game consumes(it has such a low cap for memory, WH was ultra conservative it seems for consoles) and the texture streaming was immediately reduced. The dynamic settings WH used is super aggressive even on maxed out LOD settings. Still happens but far less noticeable with the "mod"(more like cfg file).

One other thing is they need to improve load times. I'm on a ssd and it's kinda long(for an ssd anyway). Can't even imagine HDD users.Quote

fadingfool
Good choice for the keyboard and mouse in your testing suite (I would say that as I have the exact same plus the MM800 to match) .
Might have to pick up this game to give my new system a real work out

NeverBackDown
It will definitely give it a workout when running Ultra High.
I recommend Very High since Ultra High doesn't seem that well optimized.Quote
Reply