CPU Performance - Ryzen & Intel - How many cores does Hellblade require?

CPU Performance - Ryzen & Intel - How many cores does Hellblade need?

Full on CPU performance testing is something that is relatively new in our PC game performance Analysis pieces, with Ryzen performance being a new addition to our hardware test suite.

Here we have tested the game using an Intel i7 6850K Broadwell-E Hex-core and an AMD Ryzen 7 1700X over a variety of core configurations when playing the game at 1080p max settings on a GTX 1080. Both CPUs are run at similar clock speeds.

We ran our Ryzen 7 1700X with 8/16, 6/12, 4/8 and 4/4 core/thread configurations to closely match results from Ryzen 7, 5 and 3 processors. Note that in all of these tests that 16MB of L3 cache was active and that these are not exact emulations of each Ryzen series CPU at the same clock speeds. Even so, these results represent a reasonable ballpark figure.

The results here clearly show that in Hellblade: Senua's Sacrifice that the game operates at optimal levels when using 4 total CPU cores, with any increase in core/thread count thereafter yielding no further increase in performance. This shows that the game is completely GPU limited at 1080p max settings when using a GTX 1080 FE.

Moving down to 2 cores and 4 threads yields the only significant performance decrease in this test, with 4+ core Ryzen and Intel CPUs performing almost identically when playing the game. 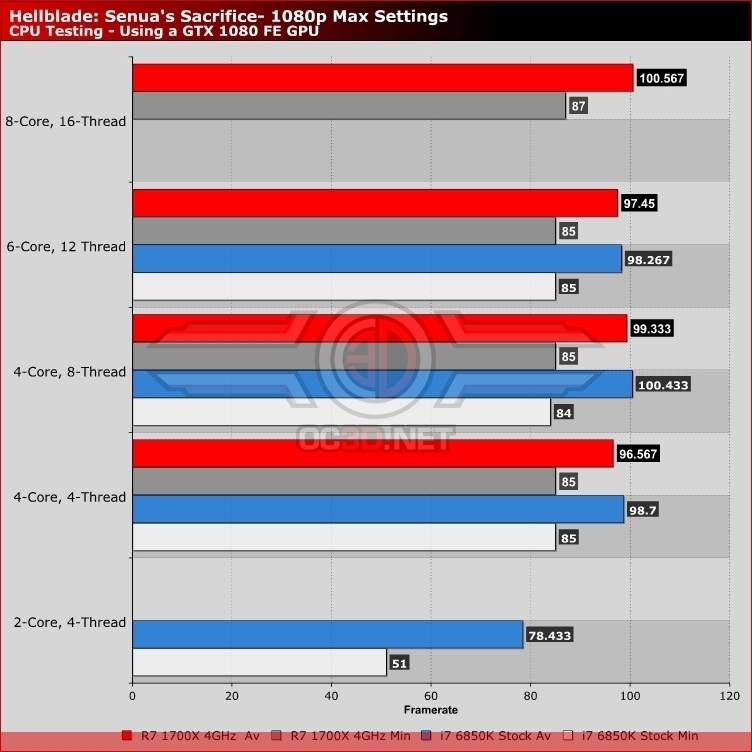