When Microsoft announced Xbox Game Pass, they said that the program would allow their games studios to explore more creative projects. Existing subscribers have nothing to lose when trying a new game on the service, and interesting takes on existing franchises and genres could help to bring a lot more players into the program.

Gears Tactics is one of these new creative ventures from Microsoft, with Splash Damage and The Coalition taking the Gears of War franchise into a whole new genre, creating XCOM-style turn-based strategy title.

When you think about it, Gears Tactics makes a lot of sense. The Gears of War series already has a cover system built into the core of every title, utilises an incredibly versatile game engine with Unreal Engine 4 and already offers 3rd person gameplay. Move that camera back and allow players to control a squad instead of an individual Gear, and we already have the trappings of a turn-based tactics game. Its the perfect move for Microsoft, especially if they want to earn the good graces of PC gamers.

Unlike most Xbox Exclusive titles, Gears Tactics is releasing on PC first. An Xbox version of the game is planned, but it will come later. This game is Microsoft's confirmation that they are taking PC gaming seriously, and if we're honest, we believe them. While Gears Tactics is very demanding at its highest settings, what we have here is a game that can scale to both high-end and low-end PC hardware, and with the low cost of Xbox Game Pass for PC, there is no reason why strategy fans shouldn't be picking this up.

In this analysis, we will be looking at Gears Tactic's performance across a range of PC hardware configurations and detailing the settings that PC gamers should use to boost their framerates on both old and new hardware. Most users of modern hardware should be able to achieve 60 FPS framerates with our tips, which is great news for users of older graphics cards. Now, let's get started. 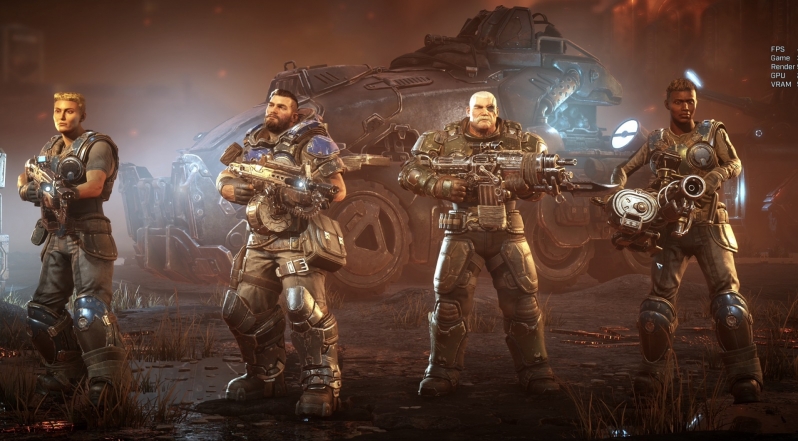 When testing Gears Tactics, we opted to use the newest drivers from both the Radeon and Geforce camps. These drivers are AMD's Radeon Software Adrenalin Edition 20.4.2 driver as well as Nvidia's Geforce 445.78 driver.

No gaming test suite would be complete without a large selection of GPUs. At OC3D our current test suite covers Nvidia's RTX 20-series and GTX 10-series alongside AMD's RX Vega and RX 500 series graphics cards.Starting with Metro Exodus, we began testing new PC games with Nvidia's latest RTX series of graphics cards. In our testing, we currently use the mid-range RTX 2060 and uber high-end RTX 2080 Ti entering our graphics card lineup. In time we hope to have a Radeon RX 5700 graphics card for RTX 2060 VS RX 5700 comparisons. With this performance analysis, OC3D's main review staff has been able to work together from across the UK to deliver wider levels of performance testing than is common for our gaming content. This has enabled us to add a wider range of GPUs to our test suite for this review. Radeon RX 5700 Series - Navi (RDNA)- Powercolor Radeon RX 5700 XT Red Devil - Powercolor Radeon RX 5700 Red Devil