The Coalition's Gears of War 4 was one of the first games to make great use of Microsoft's DirectX 12 API, having to utilise both the Unreal Engine 4 and DirectX 12 to deliver great PC visuals for the time. Sadly, the game was let down by its exclusivity to the Windows/Microsoft Store and the early issues surrounding UWP, but it ultimately set up Microsoft for a major shift towards PC gaming.

Today, Microsoft's Xbox brand has extended itself beyond console hardware, having released all of their first-party exclusives on both PC and Xbox One in recent years while also revealing plans to bring their future PC titles to gamers outside of the Microsoft Store, opening themselves to both Steam and other storefronts. Xbox Game Pass for PC has also showcased clear ambitions for the PC platform, heralding a closely connected future for their next-generation Xbox and Windows PC.

With Gears 5, which has dropped the "of War" section of its title, The Coalition plans to deliver gamers on Xbox and PC better visuals than before, the longest campaign in the series' history and top-tier support for both PC and Xbox One. Gears 5 will also be the first series entry to release on Steam, marking a major shift for the series.

Over the past few days, we have been having a look at Gears 5's Alpha test, which has allowed us to test the current PC version of the game to generate some performance data, setting clear expectations for the final game while also giving us some comparison data for future use. When the game releases in September we will see how well the game performs on PC, and how much optimisation has taken place since this week's Alpha test.

CPU-wise, Gear 5 is a game that clearly benefits from high core counts, a factor that makes sense given the game's use of DirectX 12 and its status as an Xbox exclusive. The Coalition needs to get every ounce of CPU/GPU performance out of Microsoft's Xbox One and Xbox One X as possible. With this in mind, it makes sense that the developer will try to make use out of every core that the console, and by extension Windows PC, offers.

One thing to note before looking at the graph below is that lower core count processors experience longer load time in Gear 5's Alpha, which makes sense as less CPU grunt is available to load levels and assets.

As you can see below, Gears 5's Alpha plays well at Ultra on systems with more than four capable CPU cores but prefers systems with higher core/thread counts. Our dual-core system stuttered frequently during both gameplay and within the game's benchmarking tool. We would recommend running Gears 5 on a PC with more than four strong cores. Thankfully all modern gaming-grade CPUs offers at least 4 strong cores/threads. 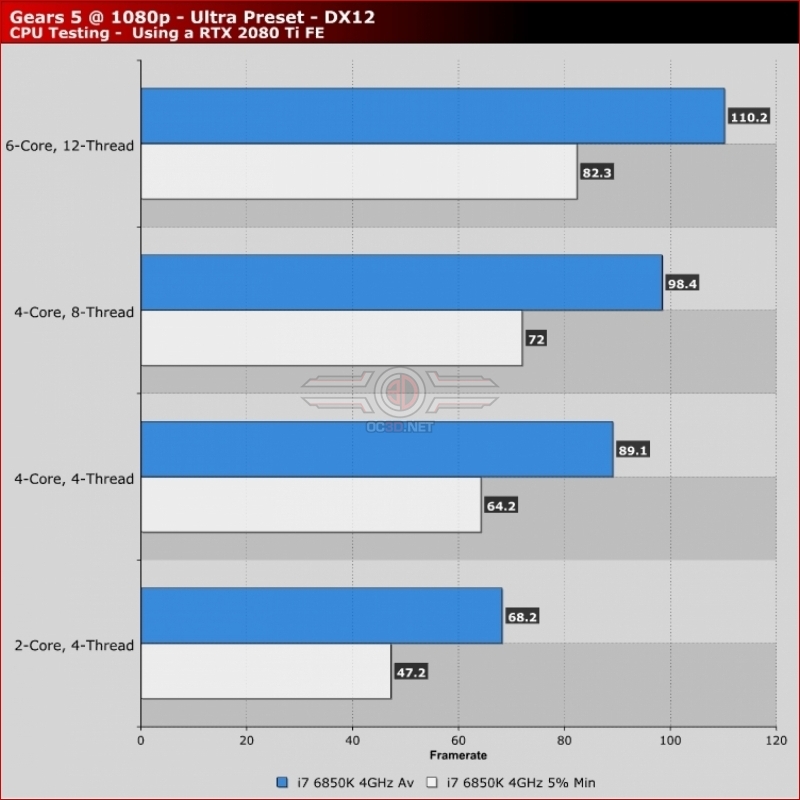 When testing Gears 5's Alpha, we opted to use the newest drivers from both the Radeon and Geforce camps, utilising AMD's Radeon Software Adrenalin Edition 19.7.2 driver as well as Nvidia's Geforce 431.36 driver.

Dicehunter
Great review Mark but you badly need a CPU upgrade, Your 1080P numbers would be miles better with either a 9900K or 3900X

WYP
Quote:
A CPU upgrade is being considered. It will just take some time to sort out. Big changes to the OC3D GPU test rig is also on the cards.Quote
Reply