Settings Optimisation - Which Settings Should be Lowered First?

Settings Optimisation - Which Settings Should be Lowered First?

Below, we have a graph which details the settings that impact Devil May Cry's framerates the most, benchmarking a highly repeatable battle scene using a variety of graphical settings.

Here, we found that HBAO+ and HDAO offer a similar performance impact, making HBAO+ the superior choice due to its more accurate ambient shading. SSAO and No SSAO offered the same performance levels, confirming that the setting does nothing in-game. Disabling SSAO was enough to push us past 60FPS in this scene, but we would prefer a little more overhead if we wanted to ensure a 60+ locked during the whole game.

Out of all of Devil May Cry 5's graphical setting, interlacing has the largest performance impact, offering us a 45% boost in minimum framerate in this test scene. This was more than enough to push the game past 60FPS, though it does come with graphical consequences.

Outside of AO quality and Interlacing, the next most impactful feature was Effects quality, which reduced the number of particles and other effects during combat. Turning this down to medium won't have that much of an impact on the game's visuals, but it offers a hefty performance increase at 1440p.

To play Devil May Cry 5 at a constant 1440p 60+ FPS with a GTX 1060, we would advise turning off Ambient Occlusion and setting effects quality to high. This should keep the full game, outside of cutscenes, locked at 60FPS at 1440p. 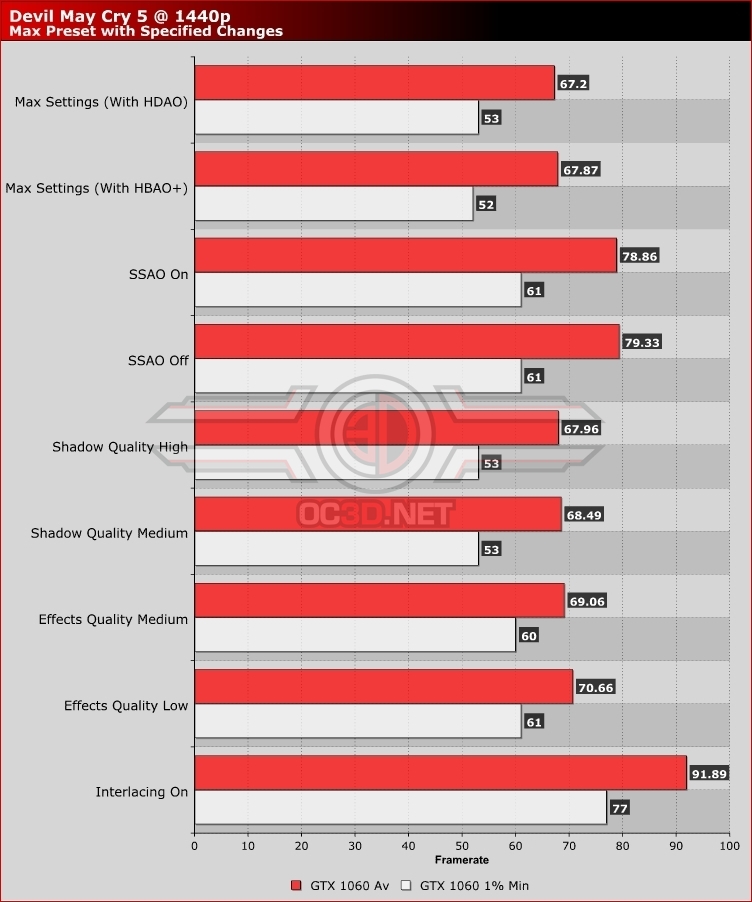