Last week Overclock3D was privileged enough to be the sole PC gaming website to be invited by Capcom Europe to their headquarters in Hammersmith for a sneak hands-on preview of Airtight Games' Dark Void. So it was that on a wintry Tuesday the Overclock-mobile was full of your favourite reviews heading towards the big smoke, talking rabidly about our current projects and our expectations of this unique game.
For anyone who has never been in the offices of a gaming or hardware company, suffice to say it would be much easier to stroll into the Tower of London and stick the Crown in your pocket, than to accidentally catch a glimpse of the latest slice of digital entertainment. We were led through so many key-card doors and up and down lifts that if the doors had opened to reveal Goldfingers lair, we wouldn't have been surprised.
Once ensconced in the test room the fun could begin. Naturally when releasing a multi-platform game it's far simpler to demonstrate it on the latest consoles, than to have tons of PCs with their various foibles, and so our preview utilised the Xbox 360 version of the game. Although this might be considered a negative, actually the game was easy to pick up and play with the clumsy pad, and the graphics suitably impressive, that we can only slaver in anticipation of the full-fat PC version.
Impressions
With a console each it enabled us to all try out various facets of the game. Believe me when I say there are lots of facets to try out too. An easy to navigate menu had the option to either play through the story mode, or to pick an individual level from the three main parts of the story and replay it.
The initial stages of the game are played on foot with a 3rd person "over the shoulder" style reminiscent of Resident Evil. Your character, William Grey, responds quickly to inputs, as he moves about the nicely rendered environment. Artistically similar to Uncharted or even the Tomb Raider series, there is a nice mix of discovery and action as you attempt to get a handle on why you are here.
Once combat arrives, and it does so regularly as it's the meat of the game, the crisp nature of the controls is brought into even starker contrast. Within half an hour I was blatting people with ease, and I'm very much a mouse/WASD guy and almost wholly useless killing things with a pad. Kudos to the development team there.
As you can see from the two screenshots below you aren't solely limited to gun-play. A very good cover system has been employed that manages to provide extra tactical depth without falling into the usual trap of you sticking to almost everything or leaping from one piece of cover to another when that wasn't your intent. The melee is one of Dark Void's hidden gems. For a long while it's only natural to play utilising the bravery of being out of range, but eventually you'll run out of ammo and have to get up close and personal. I lost count of the amount of Watchers (the antagonists) that I beat to death, and cannot recall ever seeing an identical animation. It's a claim often made about a game, but certainly in the three hours we had to play it holds true. 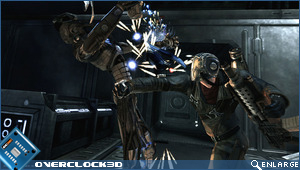 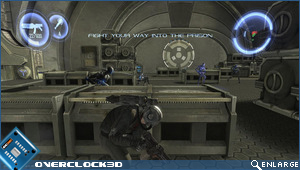 The story is very immersive with lots of talk into your helmet from your fellow humans giving you guidance or hints, or performing some nice exposition. Without spoiling too much it quickly becomes apparent that, like all such things, all is not well. Dark Void would be pretty unremarkable if it was your standard shooter, but luckily the developers have had a moment of brilliance and, as the story progresses, you obtain a jetpack that gains more and more abilities as you progress. From the initial ability to jump higher and hover for a bit, soon you'll be flying and performing amazing manoeuvres and twists whilst blowing up all and sundry. The controls, once again, shine. If ever you've fancied yourself as a bit of a Rocket Ranger or, for the younger generation, replicating Iron Man, then this is the game for you. 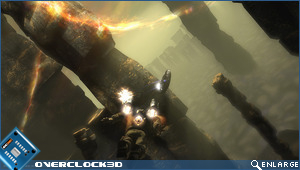 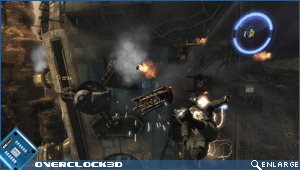 The interface is well laid out with a map on the top right showing you threats in the area, and your ultimate goal at that particular time. It certainly isn't as obtrusive or hand-holding as the ridiculous Oblivion compass or similar solutions and will be instantly familiar to anyone who has played Elite, or X3. Each item on the mini-map either has an up or down arrow to indicate where they are in relation to you, or a full diamond if you are on the same plane as them. Whilst it's not quite so important in the relatively calm foot stages, once you're in the air this becomes a vital component to help reduce the frustration that can quickly occur when you finish a fire-fight only to find you haven't a clue where you are.
Graphically the game moves at a fair clip without ever stuttering even as everything around you burns and explodes. As this was preview code some of the effects were slightly rough. The lighting system wasn't fully in place leading to some odd shadows now and again, and the lack of anti-aliasing on the Xbox 360 was quite visible when up close. However at the distance you'll play the game it's unnoticeable and certainly on the PC we can easily sort that out. 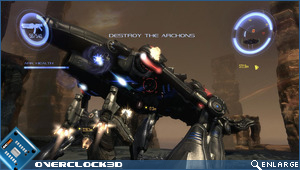 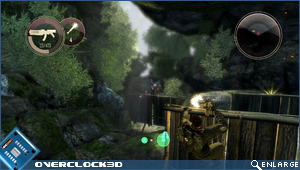 The music for the game was produced by Bear McCreary who did the composition for Battlestar Galactica. The quality of his work shines as the music only enhances the experience rather than being some generic licensed tunes that play regardless of the action taking place.
Finally, it's not at all a mindless kill-fest. The story moves along nicely and there are some journals to acquire that I definitely wont be spoiling. Suffice to say whomever wrote them has a brilliant sense of humour and some of them made me laugh long and hard.
Any game in which one of the loading screens mentions 1.21 gigawatts of power can quickly take a place in our hearts, and we look forward to the anticipated 22nd January 2010 release. 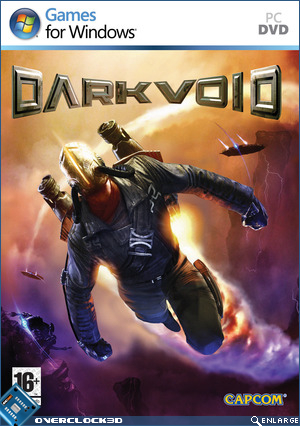 Many thanks to the fine folks at Capcom Europe for allowing us to get a sneak preview of Dark Void. Discuss this in our forums.
«Prev 1 Next»

sammytomjohn
that blokes helmet looks suprisingly alot like the 1 out of timeshift i think it was called?Quote

f0x.
Reminds me of rocketeer, love that film <3Quote

But I wonder if there are any acheivements?Quote

Toxcity
Quote:
Here's a list of all games and upcoming games which have LIVE.Quote
Reply