Not long after we published our PC Performance Analysis and Optimisation Gude for Cyberpunk 2077, several members of our community on Facebook and the Forums alerted us to an executable Hex edit which was said to boost the performance of AMD's Ryzen processors. Today, we have put this community mod to the test to see how much of an impact this edit has and how it impacts Ryzen processors of varying core and thread counts.

We edited our Cyberpunk2077.exe file using this guide from Reddit. A future Cyberpunk 2077 patch will likely deliver further Ryzen optimisations, eliminating the need for this community hack.

Anyone who edits the code of their applications does so at their own risk and OC3D are not to be held responsible for any mistakes that you make. This is an article on the performance impact of this edit, not a guide on how to do it on your own system.

What does the edit do?

The simplified summary of this Hex edit is that it addresses an issue with GPUOpen code that's used within Cyberpunk 2077. This code is designed for use with old AMD Bulldozer series AMD processors and mistakenly gives Ryzen series processors fewer scheduler threads, reducing CPU utilisation on Ryzen processors with SMT enabled.

With this hack, Ryzen users should see higher levels of CPU utilisation on processors with SMT. In many cases, this will result in increased CPU performance. We tested this Hex edit on a Ryzen 3950X processor with varying core/thread counts to assess the impact of this Hex edit for Cyberpunk 2077. 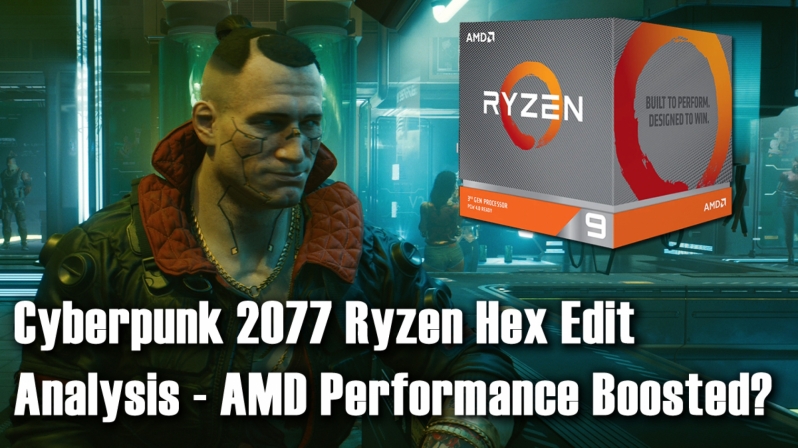 Below are results which showcase how Cyberpunk 2077 runs in a CPU-limited area at Ultra settings on a Ryzen 9 3950X with an RTX 3070 graphics card. We tested this processor with several core configurations to see how much the edit impacted performance on processors with fewer cores and threads. Note that this edit will not benefit users of Intel processors.

With our quad-core/thread setup, no major performance changes could be seen, as expected. This edit should only help those who use processors with SMT enabled.

Once we enabled SMT on our quad-core setup, we say a huge 25% boost in Cyberpunk 2077's average framerate, increasing our average framerate from 49.4 FPS to 61.4 FPS. As it stands, this Hex edit is a must for users of CPUs like AMD's Ryzen 3 3100 and Ryzen 3 3300X processors. That said, future Cyberpunk 2077 patches should deliver similar gains.

When looking at our 12-core and 16-core results, we can see that our Ryzen hex edit actually results in a performance loss for Ryzen series processors. At this time, it is unknown why this is the case. It is possible that additional multi-threading may be putting too much overhead onto the game, or that the usage of an additional Ryzen CPU die may be the cause of the performance degradation.

Right now, this community Hex edit for Cyberpunk 2077 should only be used on systems with Ryzen processors that feature a single CPU-die and eight or fewer CPU cores. On the next page, we will be analysing how this hex edit changes the power consumption and thread utilisation of AMD's Ryzen processors 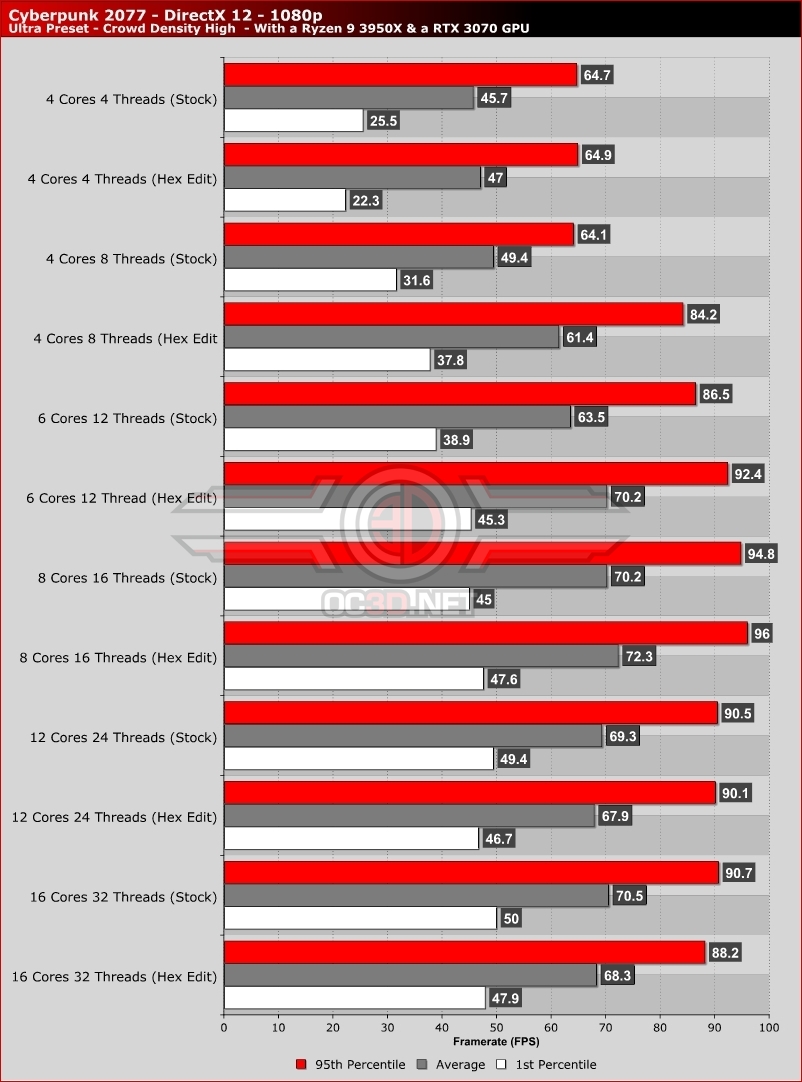 Nerdfighter
Seems like 6C/12T or 8C/8T is the maximum the game can take advantage of. It would have been interesting to see sustained clockspeeds during testing, might be that once you get to 12 or 16 cores, loading fewer threads might allow for a slightly higher boost clock, which could explain the slight loss in performance using the hex edit.Quote

KingNosser
I was hoping for better, I'll let cdpr take care of it hardly seems worth it on 8/16 for me

NeverBackDown
Its pretty easy to do and quick. Free performance for likely a mass amount of people. Once the game updates it'll get its hex code reset anyway, which hopefully indicates CDPR improves CPU performance.

Thanks for the performance analysis, you got it done pretty quickly!Quote

ET3D
Thanks for investigating this.

Looks like a big boost for 4 and 6 core CPUs.Quote

Deadtroopers
What island of stupid are these people on? In five years your toppy top of the range HEDT will be a mid-range PC and your performance in triple A games will vary from nothing to right home about to dire. I could have made that statement at any for getting on for a couple of decades, I could probably have it carved on my headstone if I didn't think funeral practices are even more stupid.


Twice a year at least the main players will trot out roadmaps, and game developers act as if we are going to have, say it is 2015, 980Ti/5950 performance for the next ten years, let alone five.


I fell off my chair laughing at this comment on some site discussing evolution: God is a game coder. That is how derp this is when you can compare the most stupid character in all fiction to the poltroons that code games.Quote
Reply