Crysis Remastered release on PC on September 18th, bringing with it new graphical features, reworked assets and full compatibility with modern Windows OS' without the need for fan-made patches or other modifications.

While Crysis Remastered offers an enjoyable experience on PC, the game has its shortcomings, especially when it comes to CPU optimisation. Add on missing features from the original and a fill level from the PC original being absent, and it is easy to see why a lot of hardcore Crysis fans were disappointed with this new release. These shortcomings are detailed within our initial performance analysis and optimisation guide for Crysis Remastered.

As of today, two patches have been released for Crysis Remastered, promising fixes for several bugs, feature upgrades and hardware optimisations for the game.

Full release notes for Patch 1.1.0 and 1.2.0 can be read using these links (1.1.0 and 1.2.0). Our focus today will be on how these patches impact Crysis Remastered's performance on PC, and how they make the game a lot more playable when using the game's High and higher presets.

Crytek has promised additional patches for Crysis Remastered, which will include patches which are focuses on CPU performance. We will analyse these patches when they are released, assuming their performance impact is worth writing about.

For these CPU-focused test, we will be using our AMD Ryzen 9 3950X-based test system with Nvidia's RTX 2080 Ti graphics card. Our games tester does not have an RTX 30 series GPU at this time, making the RTX 2080 Ti the strongest graphics card that he could use for this testing.

Please head over to the next page of this analysis to see how Patch 1.2.0 impacts Crysis Remastered's PC performance. 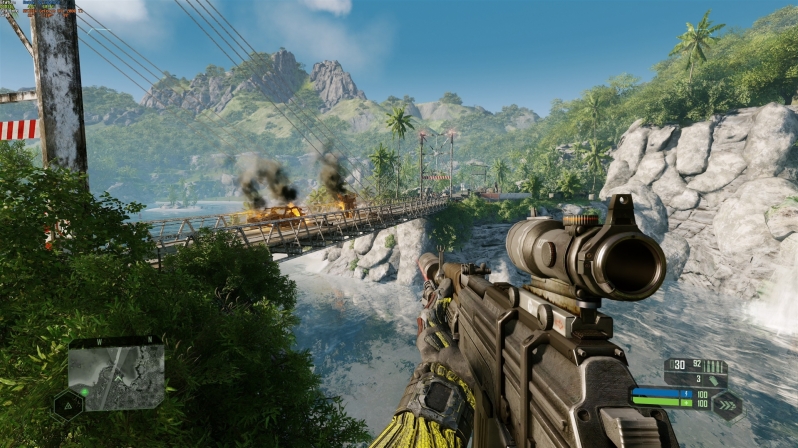 With Crysis Remastered, we will be using our new Games and Graphics Card test system, which is powered by AMD's Ryzen 9 3950X processor and PCIe 4.0 storage. More information about this system is available here, where we have detailed why we have moved to Ryzen for our GPU and games testing. CPU & Motherboard - AMD Ryzen 9 3950X and ASUS ROG Crosshair VII FormulaThere is a lot to consider when building a new games testing system. Will this system stand up to the test of time. Does this system contain the features that new games will require, and are we choosing the right CPU platform for the job? With the next-generation of consoles coming with Zen 2 processors and support for PCIe 4.0 storage, it was logical to choose a Ryzen-based test platform. Intel's current offerings do not offer PCIe 4.0 support, and we cannot build a new test system knowing that it will be outdated as soon as games start to utilise faster storage mediums. With ASUS' ROG X570 Crosshair VII Formula, we know that we have a motherboard that has capable VRMs to withstand the punishments that a hardware test system must face. With X570 we also know that we can upgrade to Zen 3/Ryzen 4000 should we ever need to.