When it comes to CPU performance, Call of Duty: Modern Warfare has two factors that place the game in a great position. Those factors are DirectX 12 support and the existing CPU optimisation efforts of Treyarch for Call of Duty: Black Ops 4.

As we mentioned before in this review, one of Treyarch's primary focuses with Black Ops 4 was to deliver a stellar Battle Royale experience with the game's Blackout mode. The Call of Duty series had never tried placing so many players on a single map before, creating the need for a lot of CPU optimisation, especially on console platforms. While Infinity Ward handled modern Warfare's development, Treyarch's use of the IW Engine ensured that many of these engine changes could transfer over from Balck Ops 4.

Next up comes DirectX 12 support, which is known for its ability to reduce CPU loads when utilised correctly on PC. Releasing without a DirectX 11 version of the game also helps in this regard, as there is no need to focusing on maintaining backwards compatibility. DirectX 12 also helps Infinity Ward make good use of multi-threaded processors.

Looking at our benchmarking data, we can see that Call of Duty: Modern Warfare doesn't benefit greatly from using processors with more than four strong cores. Even so, there are minor boosts from increasing our CPU's core/thread counts further. Even our dual-core quad-thread setup runs at over 60FPS in our benchmark runs, which makes sense given how weak the CPUs used in today's consoles are. When Modern Warfare targets 60FPS on today's consoles, that's almost always a guarantee that PC games won't need to worry about their CPU performance. 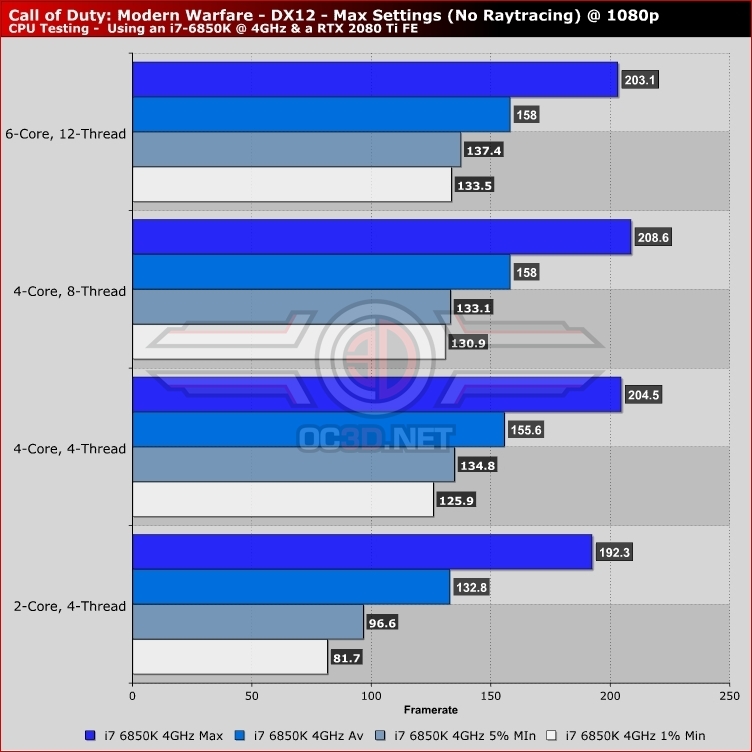