DirectX 12 is Broken, and fixing it can yield PC gamers huge benefits

DirectX 12 is Broken, and fixing it can yield PC gamers huge benefits

Borderlands 3 has launched with terrible DirectX 12 support. There is no other way of putting it. During that game's launch weekend, one of our more popular articles was a short guide on how to switch the game back to DirectX 11 mode. This brief guide can be read here.

Below we will share some DirectX 12 and DirectX 11 benchmarks using our Nvidia Geforce RTX Founders Edition and AMD's Reference RX Vega 56, RX 5700 and RX 5700 XT graphics cards. In the case of the RTX 2080 Ti, we know that the game is CPU limited under DirectX 11, with the move to DX12 significantly increasing the game's minimum and average framerates. With the RX Vega 56 and Navi cards, we can also see that Radeon GPUs also benefit from DirectX 12. Radeon's performance benefits stem from the game's support for Asynchronous Compute.

Borderlands 3 can run a lot better using DirectX 12; but as it stands, the game's DirectX 12 mode isn't worth using. Between framerate stutters and boot issues, it is safer to stick with DirectX 11 for now.

Gearbox has already confirmed that a "final" DX12 implementation is coming to Borderlands 3 in a future patch. 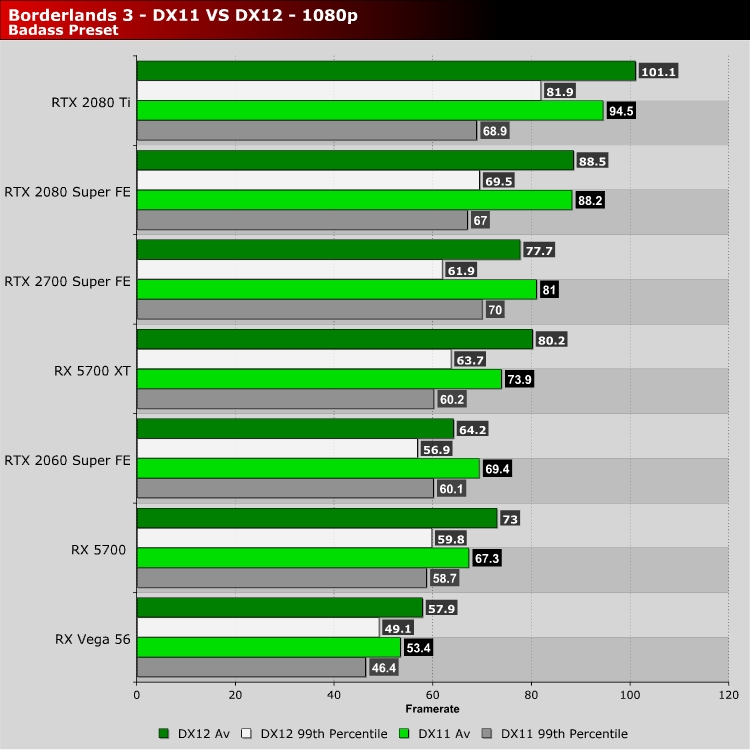