CPU Performance - What was Ubisoft thinking?

CPU Performance - What was Ubisoft thinking?

Most PC gamers aim to play games at or around 60FPS, ensuring smooth character movements in-game as well as faster controller response times. Some PC gamers even consider 60FPS a must, making Assassin's Creed: Odyssey an immediate "no buy" for some PC users.

Assassin's Creed: Origins presented these same performance issues, with 60FPS only being possible outside of major population centres, even on our high core count systems. Even at a resolution of 720p, we found that Assassin's Creed Odyssey was unable to maintain 60+ FPS at Ultra High settings on a GTX 1080 graphics card.

The benchmarking data below comes from an area within the City of Athens, which is one of the most demanding locations within the game. Every major settlement has areas where CPU utilisation will peak, thanks to the high levels of clutter and characters in each of these scenes.

Like it's predecessor, Assassin's Creed: Odyssey loves high core count CPUs, making use of all additional cores and threads to offer increased performance levels. The only problem here is that even with a 4GHz 6 core/12 thread i7-6850K or a 4GHz 8 core/16 thread Ryzen 7 1700X, steady 60+ FPS framerates are barely achievable at 720p, showcasing a clear CPU performance limitation.

Even with AMD's help during development, Ubisoft was unable to address the sheer CPU demands of Assassin's Creed's AnvilNext 2.0 engine. This fact is a strange thing to consider, as the same engine is used in both For Honor and Ghost Recon: Wildlands, both of which offer impressive visuals on the AnvilNext 2.0 engine the same CPU-based limitations.

Things only get worse if we move to higher graphical presets. 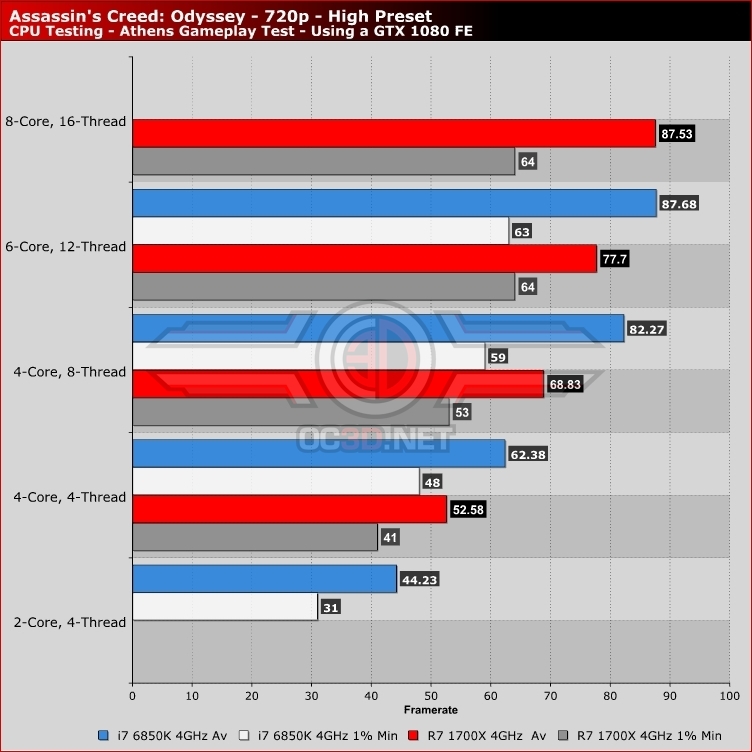 Maxing out Assassin's Creed: Odyssey, the game only gets more demanding on processors, with none of our system achieving a steady 60+ FPS at 720p. Similar framerates are achievable at 1080p, showcasing a clear CPU-based performance limitation. We believe that Assassin's Creed Odyssey's Environmental Detail settings are what causes this huge increase in CPU overhead.

To play Assassin's Creed: Odyssey at 60FPS will require PC gamers to purchased Ultra-high-end CPUs and overclock them to achieve the highest levels of single-threaded performance that they can, making this game a great use-case of Intel's i9-9900K. The problem with this is that no current-generation PC game should require this much CPU grunt for 60FPS gameplay, especially when the Jaguar cores on today's consoles can achieve 30FPS framerates with relative ease.

Ubisoft needs to either rethink how they are utilising processors in their Assassin's Creed series, or invest in transitioning the game's engine over to a low-level API like DirectX 12, which can be used to decrease the game's CPU overhead.

When we learned that AMD was partnering with Ubisoft to help create the game's PC version, we hoped that this meant that Ubisoft was serious about addressing their CPU-based performance issues. Ubisoft clearly didn't care enough to address this issue, making this one of the only games that benefit from having 8 or more threads but cannot achieve much higher than 60FPS on an overclocked Ryzen 7 1700X. 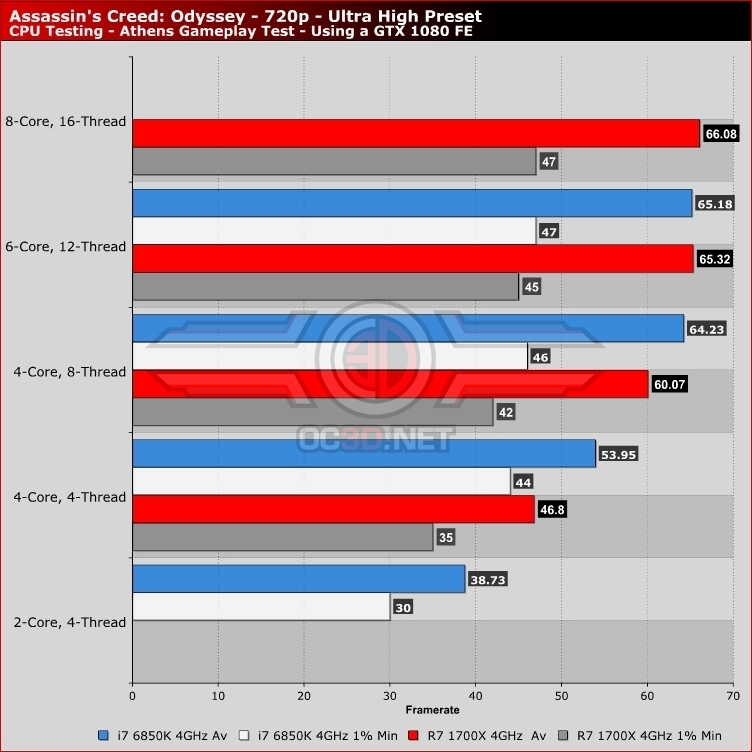 ImprovizoR
They didn't even bother to optimize the game. You can easily tell even without a benchmark simply due to the fact that they expect you to run it at 30fps on a machine that would run almost every other game at 60. And it doesn't really look any better than Syndicate or Unity which ran much better. Since the dawn of time their biggest issue has been CPU optimization. Remember Assassin's Creed 3 and how horrible the performance was due to poor CPU utilization as soon as you got to Boston? And even now, years later, it's like they never bothered to fix the underlying issue with their engine and CPU performance.Quote

NeverBackDown
Runs fine on my PlayStation

WYP
Quote:
TBH, when I get back to playing this game I will limit the framerate to 30 and play it at 4K on the GTX 1080 with custom settings with a gamepad.

It's a shame that recent Assassin's Creed games have so many issues on PC, as I personally think that they have taken the gameplay in a good direction. Its very Witcher 3-like, but I am enjoying it so far.

While this game is super demanding you guys shouldn't expect this game in any future GPU reviews. The benchmark is too inconsistent to get my approval. If this is addressed it could go into the maybe pile, but don't hold your breath on that.Quote

NeverBackDown
Yeah the last good AC game was Black Flag for performance.
Half the reason why I just play on console is the performanceQuote

WYP
Quote:
Consoles have the "It just works" factor. I can see why that is appealing for a lot of games. I have a PS4 Pro, but I only really use it for console exclusives.

I really hope that Ubisoft can fix the CPU issues in this game, as it is ridiculous how bad this game can run. It's hard to believe that Ghost Recon Wildlands and For Honor use the same engine.

TBH if I worked for AMD I would be ashamed to have my brand logo in this game. While it isn't Arkham Knight level of bad, it isn't exactly a badge of honour.Quote
Reply