Dynamic Resolution Scaling is one of the most significant innovation in modern gaming, a feature which allows modern consoles, and to a lesser extent PCs, to more fully their hardware and achieve higher resolution or framerate targets when possible.

The basic idea is simple, when a game is about to dip below the title's framerate target the game's resolution is automatically lowered and once the game's load stabilises and more hardware resources are freed up the game then increases its resolution once more. In effect, it sacrifices resolution for the sake of boosted performance when required and increases a game's resolution when there are enough free GPU resources to do so.

If you wanted to use a fixed resolution, there are two options. Eliminate performance dips by using a lower resolution at all times or make do with performance dips for a higher overall resolution and the increase graphical clarity that it provides. Dynamic Resolution Scaling is a "best of both worlds" solution to the problem, scaling down only when necessary while keeping things crisp when there are enough GPU resources available.

The console version of Apex Legends requires a dynamic resolution scaling solution to run at its 60FPS target. In the case of the PS4, the game runs at around 900p, lowering to around 720p at times and as high as 1080p in others. The Xbox One offers a lower average resolution of 720p, and the mighty PS4 Pro is said to provide an average resolution of 1080p. This data comes courtesy of Eurogamer.

If the Apex Legend's console versions offer such low resolutions, it is understandable that the PC version of the game would also have high hardware requirements to achieve a steady 60+ FPS framerate at a fixed resolution. This is why Respawn Entertainment decided to bring their Adaptive/Dynamic Resolution scaling settings to PC, under the name "Adaptive Resolution FPS Target".

This graphical option offers gamers the same technology that Respawn first brought to the table with Titanfall 2 on both PC and consoles. On Apex Legends this feature can even be used to enable a form of supersampling when there is sufficient overhead, though we have head reports that this feature causes stuttering for some users.

In the graph below we can see how this graphical option changes our framerate graphs at 1080p, where we selected an FPS target of 66 FPS, offering a 6 FPS buffer zone before the game provided sub-60FPS framerates. Both the ASUS RX 580 Strix and ASUS GTX 1060 Strix are now able to deliver a steady 60+ FPS framerate at all times in Apex legends. The boosted average framerates in this graph below are due to the elimination of low FPS minimums.

In the case of the R9 380 and GTX 960, enabling this option alone does not ensure a steady 60+ FPS framerate, which is to be expected given the relative performance of these GPUs. Lower graphical settings are also required for a constant 60+ FPS framerate. With these GPUs the dynamic resolution scaler also needed to be operating at all times, resulting in a very blurry image. We will discuss playing Apex Legend on these graphics cards on page 9. 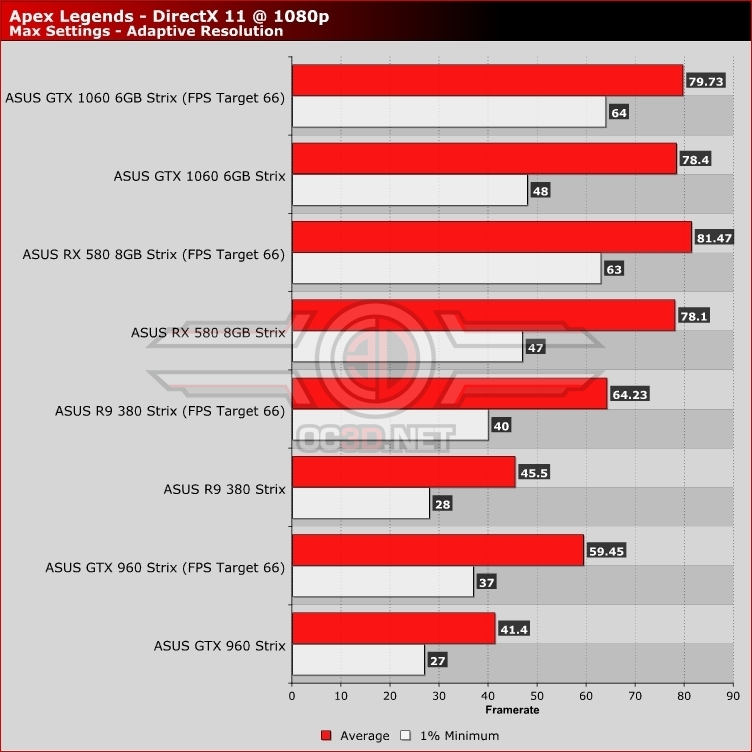 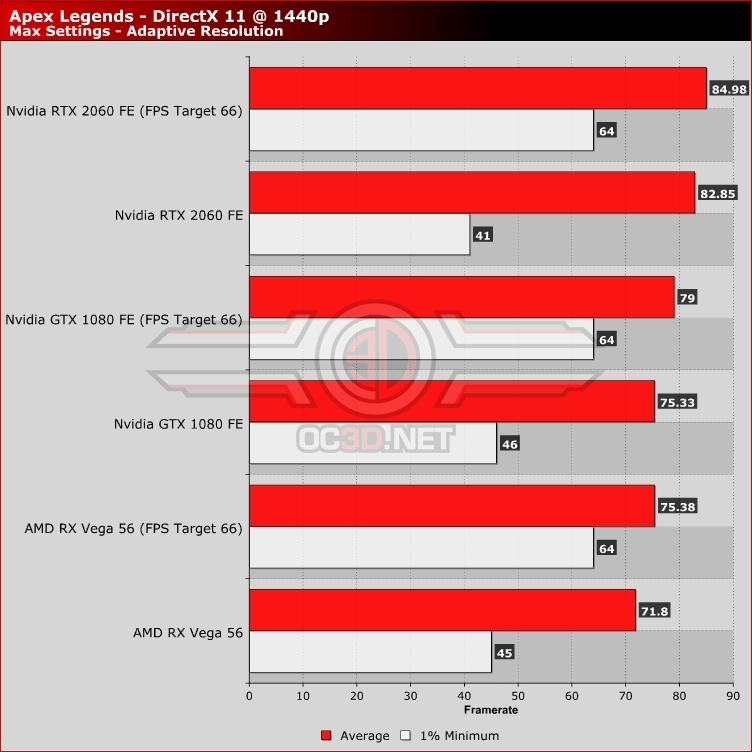