Conclusion - Is FidelityFX a gimmick?

Conclusion - Is FidelityFX a gimmick?

We often hear that games are too blurry these days, especially as features such as Temporal AntiAliasing (TAA) continues to grow in popularity. Even proprietary features such as Nvidia's AI-powered DLSS (Deep Learning Super Sampling) technology has fallen to this criticism, showcasing how many of today's gamers desire sharper graphics.

AMD's FidelityFX comes as an answer to gamers who desire sharper graphics, coming through AMD's GPU Open initiative to help developers deliver sharper visuals at a low hardware cost on graphics cards from multiple vendors. Geforce users won't get left behind here, despite the fact that Fidelity FX is a piece of Radeon Software.

In Rage 2, the first game to offer the feature, Fidelity FX was enabled by default when we played it using our RT 2080 Ti graphics card. The performance impact of the feature was not noticeable during gameplay, but its impact on the game's visuals certainly was, at least to our trained eyes. We can see why some outlets have missed Fidelity FX's subtle effect on Rage 2's graphical makeup, but we can confirm that it works and improves Rage 2's visuals.

Don't get us wrong, FidelityFX isn't a magic bullet that will fully address all of those complaints of "TAA blur" that are levelled at the game, but its impact on the game cannot be called anything less than favourable, especially given its minimal performance impact.

Like all new graphical effects, we will have to see Fidelity FX implemented within more games before we can come to a firm conclusion on the feature, but at least for now we are impressed by its impact on Rage 2. 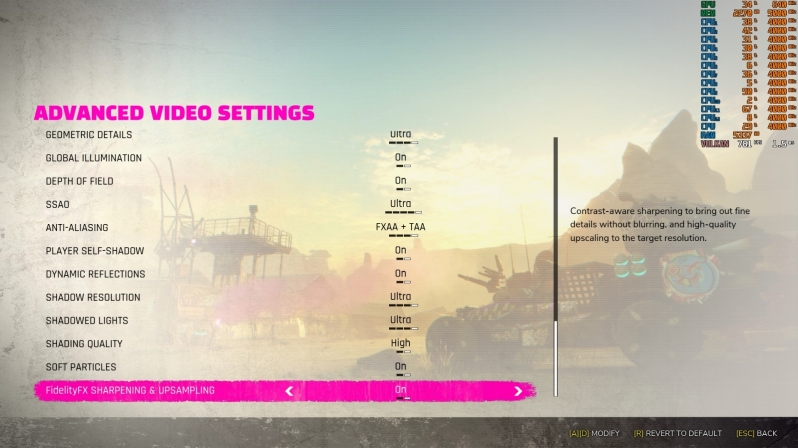 Is FidelityFX a gimmick? Yes and no. Yes, because AMD may have oversold its graphical impact and no because it does exactly what it's designed to do and has, at least in the case of Rage 2, presented no clear downsides.

AMD announced that 18 developers are integrating FidelityFX into their future games, not including Avalanche Studios, the developer behind RAGE 2. This means that we should expect to see plenty of games that include the feature moving forward, with Borderlands 3 acting as AMD's premier example. Direct integration into the Unity Engine will also bring the feature onto the radar of many 3rd party developers, ensuring that there will be no shortage of potential users.

In RAGE 2 FidelityFX has a subtle, but worthwhile impact on the game's visuals, both at low resolutions like 1080p and higher resolutions such as 4K. Is it an earthshaking feature? No, but it undoubtedly has a positive impact on the RAGE 2's visuals. The only problem is that graphical changes may be difficult to notice, making the feature a hard sell. In RAGE 2 FidelityFX is a great thing to have, but it's far from a killer feature. 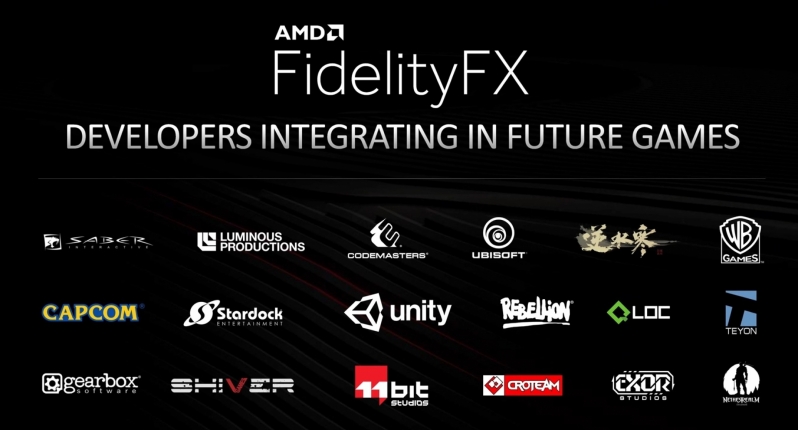 You can join the discussion on AMD's FidelityFX in RAGE 2 on the OC3D Forums.

NeverBackDown
Very subtle yes but I mean DLSS isn't great either and actually makes the IQ worse so I give it a tie.Quote

Dicehunter
It's not a huge difference but it is a nice little feature and as it's free I won't say no, The biggest difference I can see is from the Borderlands 3 screenies.Quote

WYP
Quote:
TBH with this working on both Radeon and Geforce and being practically free performance-wise I would say that FidelityFX is a win for AMD.

It has been ages since I have heard of anyone using DLSS. It has practically fallen off the face of the earth.


Quote:
Yeah, but that's the AMD screenshots for a pre-release game. Wouldn't put to much faith in that.

As you said, "not a huge difference but it is a nice little feature and as it's free". I'm looking forward to seeing more games use this. It may have a larger impact on other games/engines.Quote

But yeah DLSS is a gimmick. So is this too imo. Just have to wait and see if FidelityFX becomes more common.Quote

tgrech
Yeah I'm always torn between sticking with the jaggies and shimmers of a 1080p image or enabling post-process AA and putting up with the vaseline screen, this seems like a computationally cheap way to "fix" cheap AA.Quote
Reply