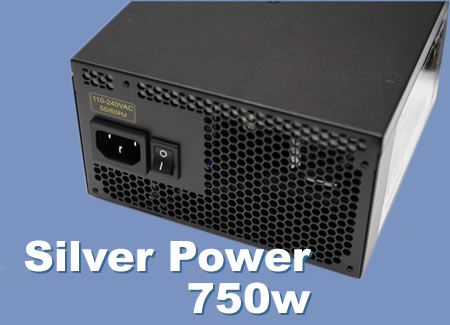 SilverPower. Now there's a name I haven't heard for a good few years. Originally founded by Tagan back in 2004 as their budget range, SilverPower has had a fairly slow but steady life with a string of good reviews including the Blue Lightning 600w that launched the brand and the GuardianX 1000W that ironically got pulled from the shelves because it was better than most of Tagan's high-end models at the time!

Fast forward 6 years to the current day and Tagan are pretty much out of the game with only a few of their previous-gen units floating around on retailers weekly special lists. However their sibling is still going strong mostly thanks to its good positioning price-wise and the currently poor state of the economy. However let's not beat about the bush and get straight into the specs...

A closer look at the rails reveals a fairly powerful +5v rail sitting alongside a slightly lower powered +3.3v rail. Of course the maximum output of both rails no matter the distribution of load is 150w. Over on the +12v side both rails sit at 38A with maximum load of 744w (62A). At least with a dual rail layout we are almost guaranteed that the unit is using OCP to protect from overloading - unlike most single rail PSU's.

alders
wow its done good. and for the gorilla im thinkingQuote

im thinking in geting one of the new gorilla !, and change my 500w also silver power wich for its 50 back than, stil does a very good job today