To most PC builders, Fractal Design isn't the first name that comes to mind when asked about power supplies. We'd even guess that some seasoned PC builders didn't even know that Fractal was in the PSU business. That should change with the Ion+ Platinum.

If one thing came to mind when looking at the Ion+ series, it's value. £124.99 for an 860W 80+ Platinum rated power supply is a great deal, and there is nothing that we see that compromises this view.

In our efficiency and ripple testing, Fractal's Ion+ 560P and 580P units perform as expected. Our SunMoon PSU tester gave us similar efficiency and voltage ripple results as ASUS' ROG Thor series of power supplies. That's no small feat for these budget-friendly units. Add on Fractal's extra features and quality packaging, and it's hard to see the downside of these units from a value-for-money perspective.

One of Fractal's notable features is their 0dB fan switch, which allows users to specify whether or not their Ion+ will run with a low fan speed or in a 0dB fan profile under low loads. While we would typically keep the fan turned off at low loads, we do understand that many users enjoy the peace of mind that always-on cooling provides, so we appreciate Fractal giving their users this option.

When testing Fractal's Ion+ series, we noted that the company's units offer what we would call a "cool off" mode. This feature runs the Ion+'s fan after the user turns off their PC to cool down the unit upon your PC's shutdown. This is great for workstation systems or gaming rigs where the system is liable to be turned off soon after heavy loading. You finish your gaming session or a large render, and now your PC is turned off while the components inside remain hot. With the Fractal Ion+ the PSU's fan is allowed to spin for a while after a system shutdown, allowing the unit to be cooled quickly, rather than be allowed to stay at a high temperature that dissipates more gradually. This feature should help extend the lifespan of the unit.

So what about Fractal's extra features? For starters, we have the unit's "UltraFlex" cables. In use, these cables feel softer than competing offerings, making the wires easier to bend and contort to suit our cable management needs. If we didn't know any better, we would have guessed that Fractal uses thinner cables than their competitors, but what Fractal has done is much smarter. Fractal's UltraFlex cables offer users a larger strand count than competing offerings and use thinner cable strands. What this does is maintain the same overall wire diameter and conductivity while increasing cable flexibility, making the Fractal Ion+ series very easy to use.

When it comes to packaging, we were impressed by what the Ion+ Platinum series had to offer. The Ion+ series is relatively cheap when compared to other 80+ Platinum series power supplies, but even at that Fractal has managed to provide their users with a dedicated power supply bag and a bag for the unit's spare cables. This makes for a premium unboxing experience that's uncommon for budget-friendly PSUs. Combine this with the Ion+'s UltraFlex cables, and you should know what we mean when we say the series feels a lot more premium than it is.

While most of this review has been positive, that doesn't mean that the Ion+ series is perfect. For starters, the PSU doesn't look great in our favoured fan-facing-up configuration. You will see above that the Fractal Design logo is upside down in this configuration. In a fan-facing down config, this logo would be pressed against the wall most PC cases or obscured by a side panel. Contrast this to a fan facing up configuration, here this logo is visible and is upside down. This is only a petty gripe in an era where most PC cases ship with a PSU shroud, but we think that it's worth mentioning.

Another neat feature of this PSU is the fact that the unit's data is on the back of the unit. This is a great placement for those who wish to read this data, as it allows it to be read without removing the PSU from your case. While not many end-users will read this data, we consider this a nice touch.

As a whole, Fractal's Ion+ series of PSUs are well thought out. They offer enough features and nice enough packaging to maintain its premium status while shipping for a price tag that relatively low, at least when compared to other 80+ Platinum rated units. With this in mind, the Fractal Design Ion+ Platinum deserves no less than OC3D's Value For Money Award. 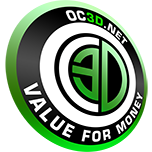 You can join the discussion on Fractal Design's Ion+ Platinum 860P and 560P on the OC3D Forums.