Despite the Liberty ECO being a 'modular' PSU, both the ATX and EPS-12v connectors are hard wired into the unit. This is actually quite a common practice among most modular PSU manufacturers as both of these cables will be required at the very minimum to power a PC system. Hard wiring these connectors into the PSU also reduces the chance of poor connections or increased resistance due to an ill fitted modular plug. 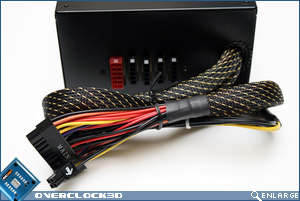 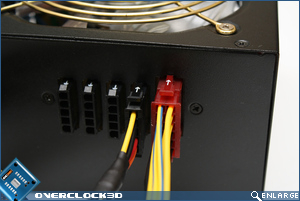 Following on from the gold fan grill tradition, Enermax have also re-used the gold laced cable sleeving seen on most of their previous units. Whether this appeals to you or not is certainly a matter of taste, but I guess you can't blame Enermax for wanting to break away from the boring black stuff. One thing we can blame them for however is just how much bare wire is on show at the end of each connector. Granted that some of this is unavoidable as certain connectors such as the ATX spread out significantly towards the end, but other modular connectors such as the 'joined' PCI-e cables would be much better sleeved individually and right to the tip. 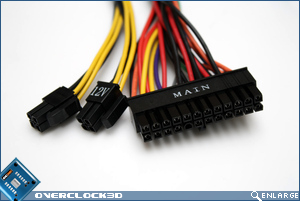 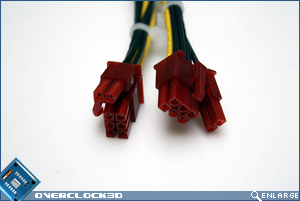 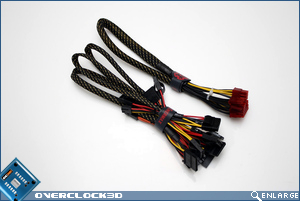 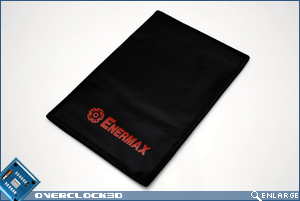 A total of 4 modular cables are included with the 500w version which is actually quite poor considering the unit has connectors for up to 5 modular cables. In fact, this has to be the first time ever I've seen a modular PSU that doesn't come with enough cables to utilise all of the available connectors on the PSU. To compound matters further, one of the cables has a rather daft arrangement of SATA and Molex connectors on a single cable which might not suit all system layouts. A full list of connectors can be seen below:

Moving on to the internals, the Liberty ECO is extremely tidy and spacious with plenty of room between each of the components and all cables entering the unit bunched tightly with zip ties. Two yellow transformers take centre stage in the middle of the unit, with the smaller of the two being responsible for the 5VSB (Stand by) rail and the larger one for everything else. Cooling comes in the form of two fairly small black aluminium heatsinks that run in parallel down ¾ the length of the unit. 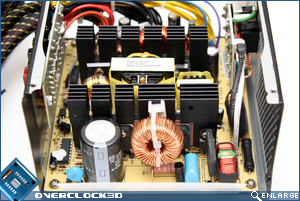 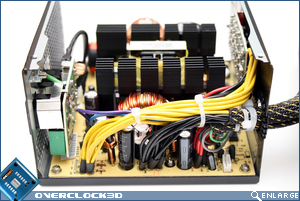 An EMI filtering circuit has been installed just behind the AC inlet on a rather tidy PCB. This should help to keep any internally generated noise from the MOSFET's and other components contained within the device, while also preventing any external AC line noise from entering the PSU. 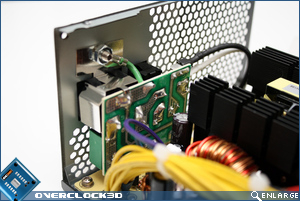 The primary capacitor is manufactured in Japan by Panasonic Corporation and carries a specification of 330uF / 400V / 85°C.  This may not be quite as high spec'd as the 105°C capacitors used in mid-range units by companies such as Corsair, but  it's still far from poor quality, and should perform perfectly fine inside a 500w unit.

At the output end of the unit (image below-right) several capacitors manufactured by jP (CE-TUR series) can also be seen in several sizes and specifications. 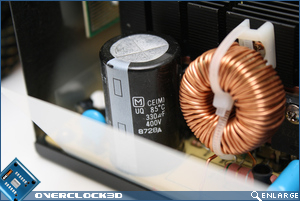 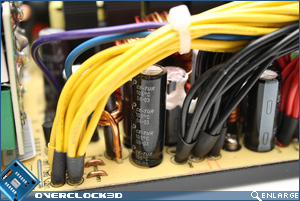 Cooling comes in the form of a 120mm fan labeled up as an Enermax EB122512H. This fan is rated at 0.30A (12v) and is automatically controlled by the on-board fuzzy-logic controller which monitors both load and temperature levels to determine the best fan speed. Further specifications for the fan are extremely thin on the ground with no official dbA or CFM statistics being listed anywhere on the Internet. 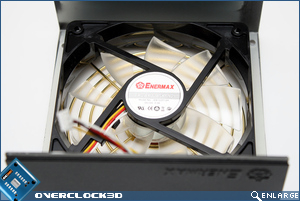 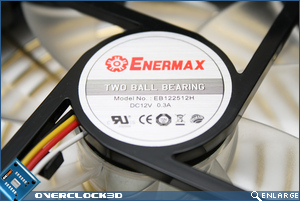 Now that we've dissected our subject, let's attempt to put it back together again ready for testing over on the next page.

zak4994
I don't necessarily see anything wrong with the packaging and appearance.Quote

Odd though, looks like someone just forgot to include that fifth cable in the bundle. Maybe a packaging error? I bet Enermax could explain somehow.

The psu isn't listed on dutch stores either, so can't give a clue about that. If it's priced around €60-80 this should make a good psu for midrange gaming.

- Could you include a 'sound' s... nvm. Already remember the psu tester was too noisy to do so.

- Could you make the review immediately go to a page when you select it with the dropdown menu? I always get annoyed when the page doesn't load until I remember to click the 'go' button.

This must be the weirdest post I've made in quite some time :/Quote

JN
Quote:
If you are referring the low-ish appearance score mate then thats due mostly to the lack of a modular cable, the cable sleeving and the use of gold (its a bit dated now...no seriously).


Quote:
That was my first impression, but on the side of the box it actually lists the number of modular cables included and for the 500w model there is only 4. The 650w (or 600w cant remember now) version is the only one to have the full 5 cables.


Quote:
Yeah I agree. If they can nail the price then I would be tempted to give it Ed. Choice award. I think its just been released though, so may be a few weeks before we see some 'real' prices.


Quote:
Ye noise from everything else makes it too hard to judge most of the time. I was thinking about measuring fan speed as a substitute, just so you could get an idea of how close it gets to running at full speed and at what load. Not sure if that would be of any use?

As for the Javascript redirect, ye I've been meaning to put that in. It was an overhang from the very first revision of the OC3D website that worked in every browser back to Netscape 4

Fan speed would sure need an indication, especially if you can tell how the fan itself is at full load by putting it at 12v without the load tester buzzing away. Inside layout of the psu influences sound though, so it would be just an indication.Quote
Reply