When it comes to power supplies, Enermax is one of those household names that everyone will have heard of. Manufacturing PSU's for over 16 years it's no wonder that people often turn to Enermax for their power needs without even so much as a glance at offerings from other manufacturers. In fact, looking back now - the first PC I ever built with my own hands was fitted with a 300w Enermax unit.

We all know that the power requirements of the modern computer is on the sharp increase (I've certainly said it enough times) and as a result people are looking for the highest wattage units available as an investment into their PC's future and its ability to handle whatever you may throw at it.

Here we are today with Enermax's Quad CPU, Quad Core, Quad SLI monster complete with five +12v rails and a modular cable layout. It certainly sounds like Enermax have done their homework, but as the saying goes: "the proof of the pudding is in the tasting" so lets get down to business.

The first thing you'll notice when you get your hands on the Galaxy is its weight. Its not the kind of power supply you'd want to carry under your arm on the long walk home from the shops (unless you're planning on being a Stretch Armstrong double). 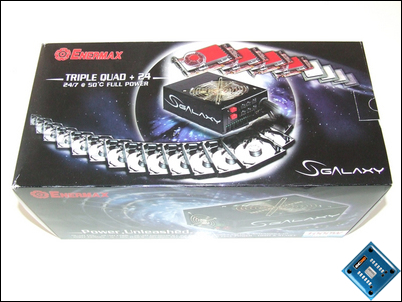 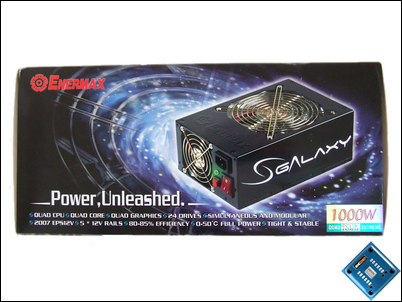 The design of the packaging is very much what you'd expect from a product named 'Galaxy' - a dark background with outer-space graphics printed on each side. The top and front of the box show pictures of the unit from various angles along with a stream of graphics cards, hard disks and processors undoubtedly all being powered by the Galaxy.

The small print on the front of the box lists some of the Galaxy's most notable features, including: Support for 24 Drives, Quad Core, Quad CPU's, 5x12v Rails, 2007 EPS12v specification, 80-85% Efficiency and much more. 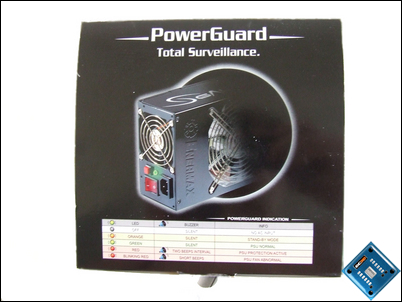 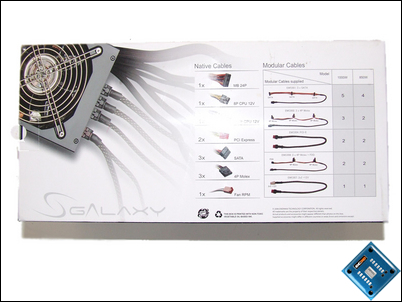 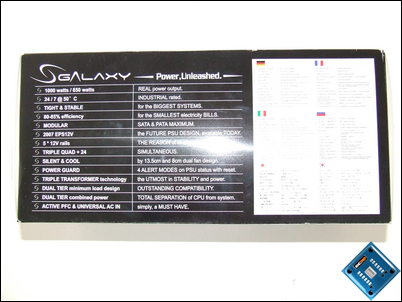 The sides and back of the packaging is where you'll find the most detailed information on the Galaxy. One of it's more interesting features (to me anyway) was what Enermax have dubbed 'PowerGuard'. This feature essentially relays the status of the power supply to the end-user via the LED on the back of the unit and an internal buzzer. The LED has the ability to switch between Green, Orange, Red and flashing, allowing for easier diagnosis of any problems.

Enermax have also listed the number of cables included for both the 850w and 1000w versions of the Galaxy on the back of the packaging along with the number of connectors that each cable has. Certainly handy for ascertaining what unit would best suit the needs of your 20+ disk RAID array! 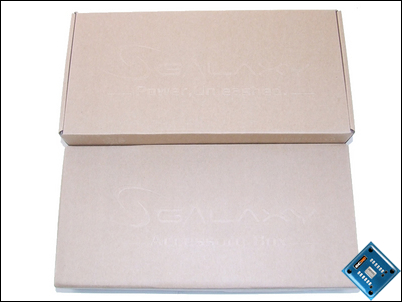 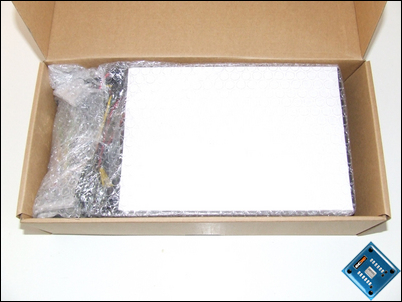 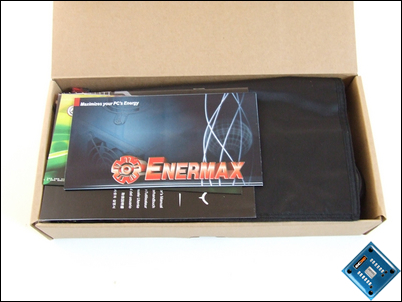 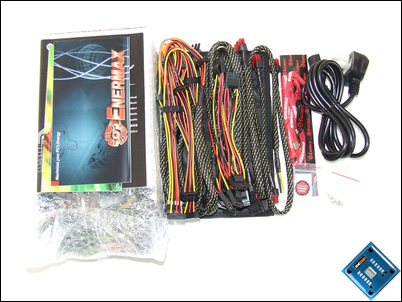 Open up the outer packaging and you'll find two recycled cardboard boxes both embossed with the Enermax logo. The larger of the two contains the power supply with the smaller containing just about everything else. Credit has to be given to Enermax for packaging everything neatly and securely inside the boxes and also for bundling in a few extra goodies to keep you sweet.

llwyd
nice review and a pretty hefty psu. i see you point about the pre-fixed cables making it half modular but what 1000W pc wouldn't use all those cables anyway lolQuote

JN
Quote:
Yeah exactly. It would have been near impossible to impliment a sturdy modular system with all of those cables and remain 100% modular.Quote

Ham
That thing is huge....Quote