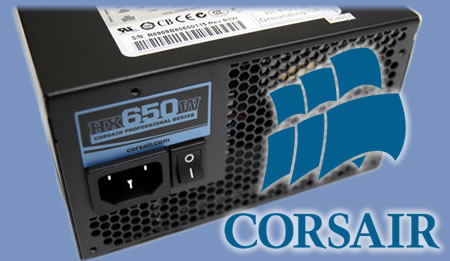 Ahh...it's good to be back in the reviewing seat again. After almost 3 months of coding the new Overclock3D website (which I hope you like), the itch for testing PSU's to within an inch of destruction needed to be scratched. And what a better place to start than Corsair's HX650w...that, *ahem* has been sitting at the OC3D offices since October (sorry!).

Truth be told, I actually started this review a while ago. So these random mumblings are really just a filler for the original text which told you all about how the HX650W is the successor to the original HX620W, how it was released pretty much on its 3rd birthday, and how the original unit achieved an almost iconic status among the enthusiast communities who recommended it for its stability, silent operation and cool modular cables.

But, let's get back on task. The recently announced HX650W is what we're talking about here, and although the unit clearly sports an extra 30w of power over it's predecessor, this isn't what it's all about. So what better place to start than the specifications pulled straight from Corsair's website to try and clear a few things up:

Looking through the list, a large number of the specifications can be matched to those of the HX620W. For example, both PSU's are exactly the same size. Both have the same list of safety features including OCP, OVP and OPP, and both are guaranteed to deliver their full output at a toasty 50°C. But, similarities are not what we're interested in here, so what about the improvements?

Well firstly, there's 80PLUS Bronze certified efficiency up to 85%. This is 5% higher than the rated efficiency of the HX620W and certainly brings the unit up to more modern standards. I do say that between gritted teeth though, as it still falls short of the ~90% efficiency achieved by the HX750W and HX850W units which i was hoping the HX650W would mimic. Then of course there is the single +12v rail rated at 52A. But yet again, don't get too excited as the HX620W was capable of delivering 50A on a single +12v rail, despite having 3x 18A rails on paper.

The +3.3v and +5v rails also mimic those of the HX620W which isn't exactly surprising as I doubt Corsair wanted to make the HX650W any less powerful in this area than it's predecessor. But never less it's worthy of note that the combined 170W output of these two rails bests the comparative 150w output of the HX750W and HX850W.

So we're off to a bit of a slow start with only a few minor differences apparent on paper between the units new and old. Maybe the dissection over the next few pages will reveal more...

f0x.
Great review Jim, your test area must look like a NASA lab room :P Great to see you back mind ;-)Quote

JN
Cheers mate. And yea, when people come round they do give me a bit of a strange "are you a terrorist or something" look

Hemicuda
Is the 7 year warranty applicable to the modular (HX) series only, or does it cover the TX PSU's as well? local etailers have variously listed 5 and 7 year warranty's. Not a major as I'm sure either would last the distance. Awesome review.Quote

JN
The TX950w I've got here has a 5yr warrenty. So I'd imagine that applies to the rest of the TX series too.Quote