Corsair is one of those names that every computer enthusiast would have heard of. Producing high performance memory modules since 1994, Corsair have always provided memory solutions for both the budget user and the extreme overclocker. However, today we're not going to be looking at any of Corsairs memory modules - but instead their newly released HX620 620w modular power supply.

Maybe it's just me, but there seems to be a strange phenomenon taking hold at present where every high-end PC component manufacturer is creating their own line of PSU's. This is certainly no bad thing, as it introduces new competition to the market, driving down the prices of high end power supplies, and forcing existing PSU manufacturers to improve the quality of their units and introduce new features.

Have Corsair done their homework with the HX620? Let's find out...

When the HX620 arrived at my door, I must admit being surprised by the size of the box. Most ~600w units I've reviewed in the past have come in rather minimalistic packaging in an attempt to shave a vital few pence off manufacturing costs. 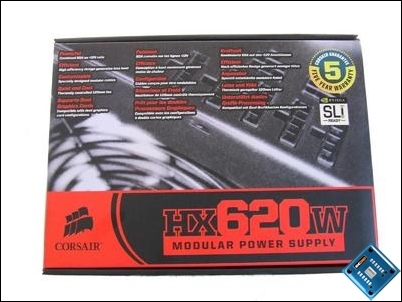 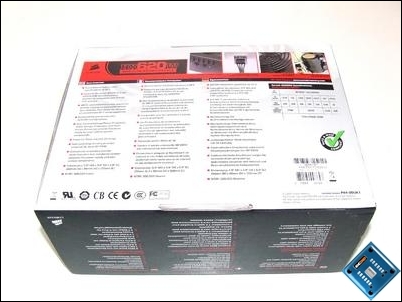 The HX620 features a 2-tone black and red theme throughout most of the packaging, with an up-close image of the units modular connector system spanning the front of the box. Overall the packaging is quite simplistic but does give the feeling of a very professional product.

I was extremely impressed to see Corsair providing a 5 year warranty with the HX620 as this is something often only seen on the most expensive server-based power supplies.

Turn the box around and we can see that Corsair have listed the HX620's specifications in English, French and German. Some of the most notable features include: Guaranteed to deliver specifications at 50°c, Supports latest EPS12v standards, Industrial grade capacitors, Compatibility with dual-GPU systems, Gold plated connectors. The first of these specifications (Guaranteed to deliver specifications at 50°c) is very commendable as many other PSU manufacturers rate their power supplies at 30-40°c, which is often below the operating temperature of the unit and leads them to giving the PSU inflated performance figures. 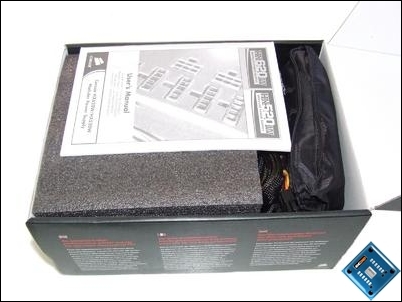 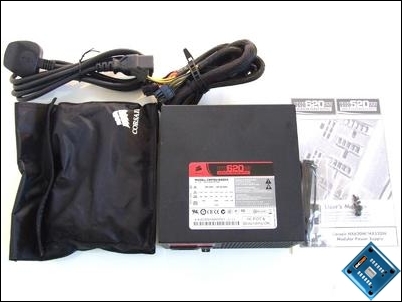 Corsair have taken extensive measures to ensure that your HX620 arrives at your door in perfect condition even at the hands of the most brutal courier. The unit has been placed in a double walled cardboard box and is sandwiched between two large foam mouldings that protect all corners of the unit.

Ham
Had a quick flick though. Another good job Mr XMS.

Seems very pricy to me though.Quote

Ham
Quote:
Read the review, its in there.Quote

Can I see a quote?Quote

JN
Quote:
"For a ~600w unit the sum of £96 (over at Scan.co.uk) may seem a little higher than most other competing products, however as the saying goes - "You get what you pay for", and this is certainly true for the HX620."